THE PBA could not be happier with how the Mindanao leg of its All-Star Games extravaganza turned out Wednesday night. The Davao del Sur Coliseum in Digos was filled to the rafters and the fans stayed late into the evening to watch the final basket sink in the match between the National Team and the Mindanao Selection. Mindanao won, 144-130.

Provincial sorties like this form part of PBA’s outreach program. And while PBA games in Metro Manila often play to embarrassingly empty coliseums in the early part of a conference, such is not the case any time the league brings its act to the provinces.

Out-of-town PBA games are guaranteed a full house. Local folk flock to these games as though a circus just blew into town. It’s not hard to see why. Professional basketball players are celebrities they see mostly on TV, and the chance to see them in the flesh this one time is a very hard urge to resist in this basketball-mad country.

It does not even matter if the visiting teams are cellar dwellers. What matters is that the PBA is in town!

It is not just the hoi polloi, mind you. The province’s political and economic elite comes to see — and be seen. Occupying front-row seats, they are acutely aware of the cameras and the crowds as they exchange pleasantries with players, coaches, and PBA officials. (We guess the hobnobbing validates their importance.)

Hosting provincial games is not cheap, though. A promoter could shell out at least P2 million, according to PBA commissioner Willie Marcial. Besides the hosting fee of P800,000, the promoter also covers food and lodging, transport, security, and all arrangements around the game. Should the game require a plane trip, the promoter buys tickets for at least 65 people, not to mention reserving 40 hotel rooms and renting two huge air-conditioned buses for the entire entourage.

For its part, the PBA provides players, coaches, court officials, and referees. And, if all goes well, an exciting game for local folk to talk about for years. Needless to say, the visiting players are treated like royalty, if not movie stars. They are admired, ogled at, touched, mobbed, photographed, and sought for signatures. This sort of thing seldom happens in Manila, where fans see the fellows playing before them three to four times a week.

Although provincial appearances are fervently sought, these outings rarely make big profit for organizers and promoters. “Breaking even is good enough for promoters,” Marcial says.

The upside for a promoter is that he becomes known as the person responsible for bringing the PBA to the locals. It's no wonder politicians are among those who bring the games home to the provinces. The next time election comes around, it's a useful battle cry for someone running to say it was him that brought the last circus around.

Marcial says the PBA usually accepts hosting offers before the start of the first conference. The usual, regular promoters are still around, but every year more inquiries come from different persons from various provinces. The PBA commissioner adds that they try to bring the PBA to places the league has not been to. “We try to visit new places every year,” he says, adding that this year and next, they plan to have games in Bohol, Iloilo, other places in Davao, Legaspi City, Pangasinan, and Dipolog.

The All-Star Games and its various sidelights — such as a shooting contest and even dunk contests — are the PBA’s biggest provincial outings. These used to be held in just one city over a two-day period. But currently, the All-Star Games, featuring the best PBA players, have become a traveling circus playing in three cities.

It opened in Digos Wednesday night, will open in Batangas City on Friday, and open in Iloilo City on Sunday. 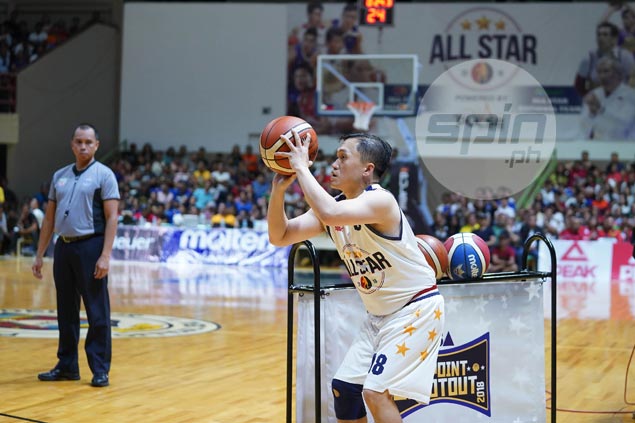 The basketball game itself is never about the competition or the score or the victory. Instead, it is an unapologetic showcase for professional players to make themselves visible, approachable, and, to go by the dance competition among players in Digos, to be funny and even ridiculous. It is great entertainment.

The games, however, can’t seem to avoid being political showcases as well. See how, in Digos, among those taking center stage in the three-point contest were: presumed senatorial candidate Bong Go; presidential son-in-law lawyer Mans Carpio, also known as the husband of Davao City Mayor Sara Duterte; and Manny Pacquiao sibling Bobby, a congressman from General Santos.

But in the end, the people of Digos could not have cared much about the Gos, the Carpios, and the Pacquiaos shooting hoops. They were too busy being thrilled by the sight of PBA players on their turf — a viewing experience that's likely to last them a lifetime.