Patrimonio and Co. to take on NBA legends

A TEAM of NBA legends led by Chicago Bulls Hall of Famers Scottie Pippen and Dennis Rodman will be facing off against former stars in the local pro league on July 18 at the SM Mall of Asia Arena. 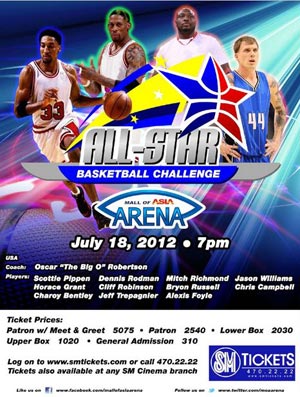 Organizers of the one-off match billed as the All-Star Basketball Challenge made the announcement through MOA's official Twitter account.

Three-time PBA MVP Alvin Patrimonio will lead the cast of PBA legends along with another former league MVP, Kenneth Duremdes, Jerry Codinera and Marlou Aquino, according to the tweet.

The great Oscar Robertson, regarded as one of the best playmakers ever in NBA history, will be calling the shots for the All-Star team which is also set to play in Taiwan and other key Asian cities.

When asked to confirm the news, Junel Baculi, athletic director at Sy-owned National University, said he thought organizers were still weighing their options since there was concern about whether the former PBA stars -- although active in the legends circuit -- are fit enough to keep in step with the ex-NBA players.

With both the PBA and collegiate seasons ongoing by the time the exhibition match is played, Baculi said one viable option considered was Asean Basketball League side San Miguel Beer.

“They are asking us to help them in communicating with coach Bobby Parks. Since the UAAP and the PBA season are already ongoing at that time, San Miguel is the next best option because they are fit to play,” said Baculi.