FOR most of the NCAA Season 93, Lyceum coach Topex Robinson was adamant in saying that they’re playing to serve as an inspiration to the people who’ve been watching them play.

But in clinching an automatic finals berth with a historic 18-game sweep, the Pirates coach found his wards inspired by the Lyceum community.

Right in the middle of a San Beda flurry, the horde of Lyceum supporters never let up in cheering for their school, and with thousands of students flocking to the Filoil Flying V Center – it surely fired up the Pirates.

“Yeah. Masarap yung feeling na kahit saan ka lumingon may nagchi-cheer sayo and never leaving your side. When we were down by a lot, they were just cheering, wala na silang pakialam if we're making shots or not. They're just there,” said Robinson.

“It really brings the community together, to go through adversities, shared adversities and shared success. That's been our battle cry,” he added.

The Pirates made sure to not disappoint their crowd as they hacked out an exciting 107-105 win in double overtime against San Beda to complete a historic elims sweep and clinch the first championship appearance in school history.

As Robinson continues to receive praises for a job well done, the former PBA pro says that it’s always been a collective effort for the community.

“We're not seeded or known to be a good basketball team, and just because of the commitment of the players, the students, the teachers, it's special to be part of this and it's a blessing for all of us.”

Robinson also took the time to extend his gratitude to the school higher-ups in the Laurels, who cancelled an important overseas trip to witness history according to the Lyceum coach.

With the school backing them all the way, it’s no surprise that these Pirates have been playing inspired basketball.

“I just want to thank also the Laurels who are pushing. Everything that they got... they were supposed to have a family trip overseas but they cancelled it. Because they wanna be here and when you really have your bosses supporting you and really telling you to really give their 100% support,” Robinson continued.

“It's really special. I think what transpired here is not just us but the whole LPU community -- the culture, the tradition with LPU... It's just something that I'm so grateful for. Really blessed to have the Laurels and the Lopezes to really support us.” 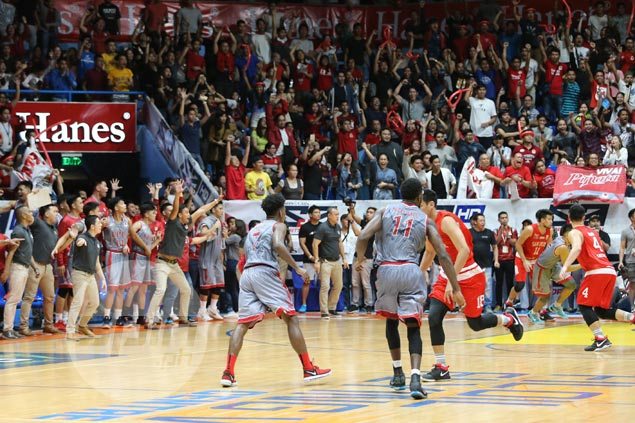