UP until the final minute of the deadline for the 2017 PBA Draft application, San Beda head coach Boyet Fernandez was still in the dark on whether his star guard was heading to the pros or staying one more year with him in the NCAA.

Ever the prankster, Bolick decided to have a little fun with his coach.

“He texted me about 4:55 p.m. and he told me, ‘Coach, I’m sorry. I already sent my application,’” Fernandez shared while Bolick had a hearty laugh beside him. “I told him, you still have five more minutes to take it out.”

It was all a joke, though, and Fernandez can finally breathe easy knowing he’ll be having the 6-1, 20-year-old guard around for one more year.

As the 5 p.m. deadline lapsed on Thursday, Bolick decided to stay put, shunning the possibility of a hefty payday as a PBA rookie who's projected to land somewhere in the high first round.

Bolick, who many believe can stand out in the PBA with his size and high basketball IQ, said he simply can’t turn his on a school which gave him a second chance after spending his first few years in college basketball languishing on the La Salle bench in the UAAP.

The six-figure contract in the pros can wait; for now, it’s all about giving back to the San Beda community. 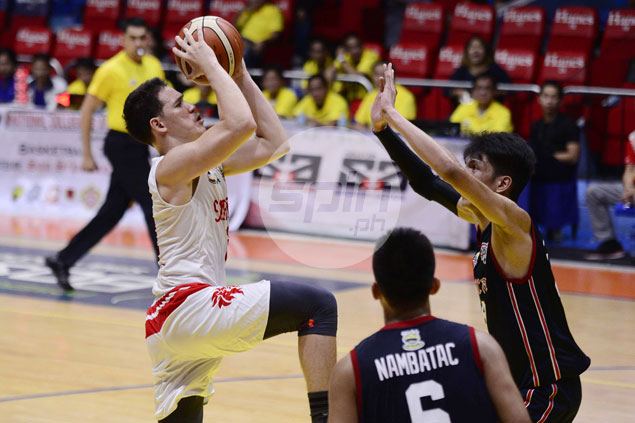 Some may not agree with Bolick’s decision, considering the shallow draft class and the momentum he’s riding after an impressive performance in the PBA D-League for Cignal.

But for a player with a potential as big as Bolick’s, those things can wait.

Giving back to his alma mater and getting a degree at the same time isn’t a bad way to spend the next year or so.

Fernandez, who himself is a registered nurse, is happy that Bolick considered the only advice he gave him. That is, to put importance on education.

“Only advice I gave him is look at the future. Mas maganda pa rin na graduate ka. You still have one more year for San Beda but again, it’s really his decision,” continued Fernandez.

With the PBA now far from Bolick’s mind, Fernandez is delighted to know that they can now focus on the task of repeating as NCAA champion this season - and perhaps a shot at a three-peat down the road.

Fernandez can't be any happier.

“I really appreciated that Robert took the other way and stayed with San Beda. I’m sure the whole San Beda community will love him for that. I cannot ask for more, having Robert Bolick in my lineup next year. It will be good for us.”