WHEN Letran hosted College of Saint Benilde on Thursday in an NCAA on Tour game, not a few noticed that both teams were basically wearing dark jerseys - the Knights showed up in red uniforms and the Blazers sporting green kits.

Keen-eyed SPIN.ph readers, not surprisingly, noticed and started asking questions on our comments section, with not a few of them raising the possibility of a forfeiture due to a technicality, especially in light of a league decision to forfeit a Perpetual Help win against CSB for wearing the wrong uniform during a game.

Just as curious as they are, we started asking questions.

We got our answer from Letran athletic director Fr. Vic Calvo, who explained that for years the Knights have been sporting either red or blue jerseys that it has become part of the league tradition in itself.

No mistake. Calvo said Letran was wearing the correct jersey on Thursday when the Knights showed up in their red uniforms, their designated light jersey, while the Knights' dark jersey is its designated blue uniform.

Calvo explained their jersey choices stemmed from the school colors of red and blue which are emblazoned in the Letran logo. 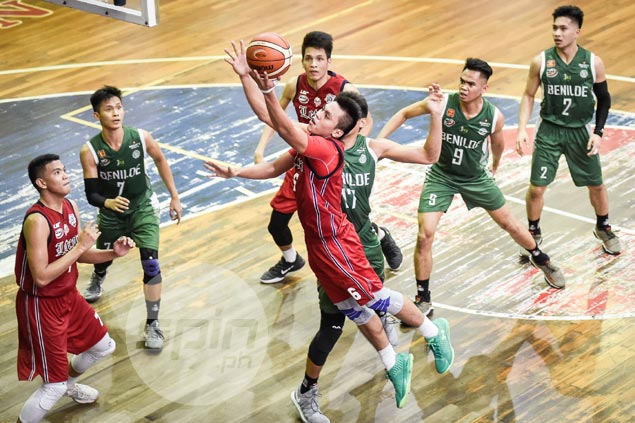 There were, however, rare times that Letran broke tradition and decided to wear white as their light jersey, the last in 2012 when Louie Alas coached his final year with the Knights and his son and now-NLEX cager Kevin Alas was still playing for the school.

Calvo said the decision to wear white jerseys drew flak from the community, particularly the alumni, prompting Letran to revert back to red as their light uniform.

Calvo said all NCAA members and the Office of the Commissioner are already aware of Letran's tradition that there no longer is any confusion with regards to the choice of colors.

The Knights are also the ones that adjust when the designated dark jersey of the opponent is red, Calvo said. A perfect example is when Letran faces San Beda in which the Knights do not wear their red uniforms regardless of whether they are the designated light or dark team.