FRANZ Abuda wasn't even supposed to play on Sunday night. But given the chance, he made every second on the floor count and left his imprint all over the game to help San Beda get the win.

Well, just like his dad, the 20-year-old forward is seizing every opportunity to showcase his defensive prowess and work ethic as he bids for a spot in the Red Lions roster in the coming NCAA season.

Abuda, of course, need not look far for a role model. His dad Freddie turned himself from a second-round pick in the 1993 PBA draft into an indispensable part of the multi-titled San Miguel teams of his era.

That has been the case for most of the young career of the the scrappy forward, who was recruited by San Beda coach Boyet Fernandez years ago but found himself in limbo after Fernandez left the team to coach NLEX in the PBA.

Abuda, however, persevered and is finally getting a chance to bid for a place in San Beda's final lineup upon Fernandez's return this season.

"When I recruited him, I talked to Freddie and I was really telling coach (Freddie) that I really want his son to play for San Beda because I want his defensive mentality," Fernandez said.

"It was just unfortunate I left San Beda a year after, pero when I got back, I told Franz, 'Remember when I got you? It's because of your defense.' Hopefully he'll pick it up again." 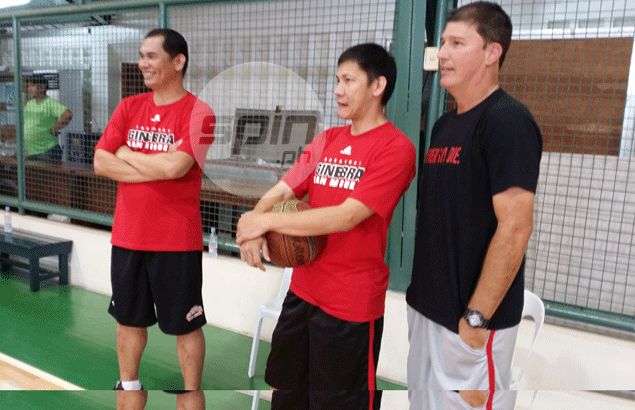 Abuda, at 6-1 a shade shorter than his father, is making the most of the new lease on life in his career.

On Sunday, he got his minutes only because one of his teammates was injured and promptly delivered, coming off the bench to score five points and grab seven rebounds in the Red Lions' 75-63 win over Letran in the Filoil Cup.

Fernandez, who played against Franz's dad in the PBA, doesn't need much more convincing.

"He showed today what he can really do, that's credit to him, to the boy. He really stepped up and hopefully he can follow in the footsteps of his father."