DONALD Tankoua left Douala, Cameroon in search of a better life. He found a path at San Beda, where he pursued a marketing management degree by taking advantage of his athletic gifts to earn a scholarship with the men's basketball team.

Half a decade later, he's a three-time NCAA champion with the Red Lions.

Tankoua almost had a fourth ring on his fingers to cap off his academic run in Mendiola, but Letran denied San Beda of that feat this past season. Yet as much as losing that championship stings, all the 6-foot-5 bruiser could feel is gratitude.

"That was my goal this year, going out and leaving a legacy this year. I feel really bad that we lost," said Tankoua, who served as a bridge from the days of Baser Amer and Robert Bolick to the current team led by James Canlas and Calvin Oftana.

"I wanted to go out in a good way, leaving the game with a championship before I go out. But it's good to have three championships." 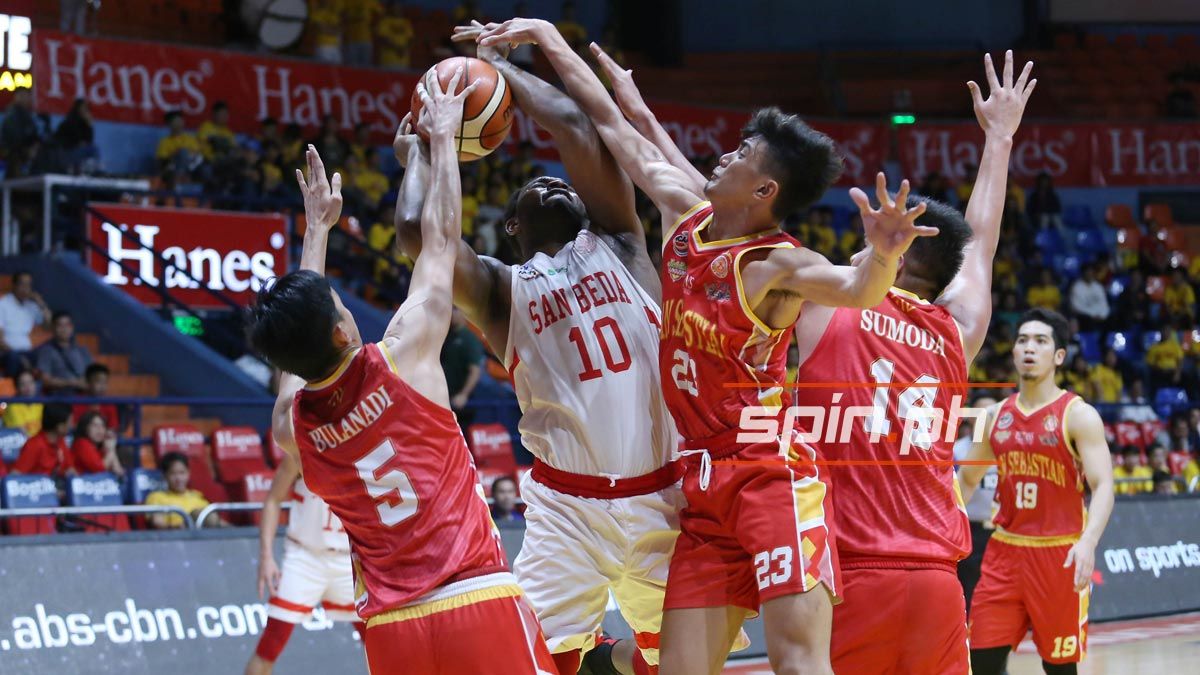 Clement Leutcheu had more or less the same motivation when he left Africa, seeking an education that would put him in a better position to succeed in life.

"I came from Africa, and Africa is pretty far from Asia, so that was something tough for me, to leave my family and everything," said the Cameroonian, who went to the Philippines to pursue a hotel and restaurant management course at St. Benilde.

In exchange for his scholarship, his 6-foot-7 frame came in handy as he manned the paint for the Blazers in the NCAA men's basketball tournament. It wasn't easy, Leutcheu admitted, but such sacrifices are needed if you to go anywhere in life.

"In life when you want something, you have to do whatever you have to do. I came out here to study, try to finish my diploma, and hopefully learn something from basketball. This is my passion. And so I was hoping since the Philippines is a basketball country, I can do my school here and it can maybe take me somewhere else after I'm done with my college life," he said. 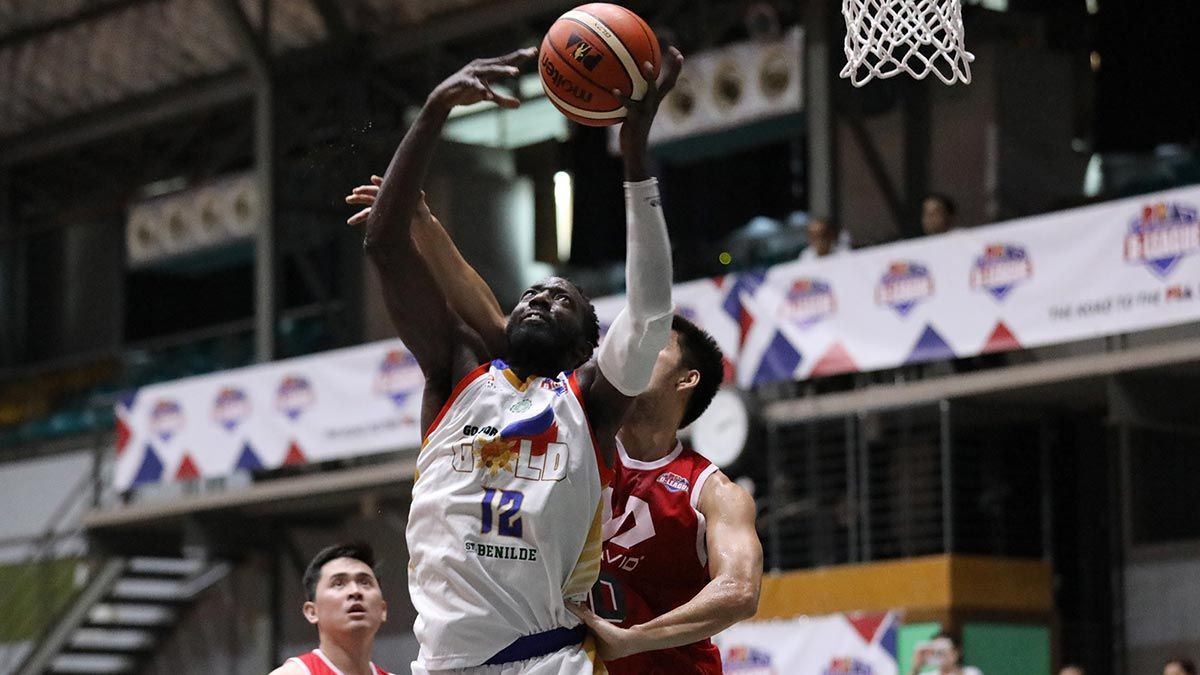 Education was also what brought Mike Nzeusseu to our shores from Cameroon, but it was a chance to be a part of something special that brought him to Manila, spurning offers from major schools before deciding to go to Lyceum.

"When I left Cebu back in 2013, Lyceum wasn't one of the top teams. Even my coach back in Cebu was surprised why I didn't go to Ateneo or La Salle, those types of teams," said the 6-foot-7 high-flyer, who was initially recruited by University of the Visayas.

"I told them that I was already with one of the top teams in Cebu, so I wanted to have a different experience. That was one of the reasons I chose to play for Lyceum. I'm really grateful that I was able to have an impact and embrace the culture in Lyceum."

With the Pirates, Nzeusseu became a game-changer, forming a potent partnership with CJ Perez as the Topex Robinson-coached squad transformed from perennial cellar-dwellers into title contenders for the past three years.

He also didn't expect that the jump to Lyceum would lead him to his wife Jill.

Those are just a few of the success stories for foreign players who got their opportunities in the NCAA. There won't be any of those come next year, or the seasons after for that matter, for the Grand Old League.

Tankoua, Nzeusseu, and Leutcheu, as well as San Beda's Arnaud Noah, are the last of their breed, with the quartet forming part of the final batch of foreign players allowed to suit up in the NCAA this past Season 95.

Starting Season 96 in 2020, foreign players will be barred from taking part in any sport in the country's oldest collegiate league.

The rationale for the policy change, as per the management committee, stems from the idea that taking out foreign players would level the playing field for all schools, specifically in seniors' basketball.

Since the league expanded in 2009, eight of the 11 titles were won by a school with a foreign player in its roster. All those teams were from San Beda. The only exceptions were San Sebastian in 2009, and Letran in 2015 and 2019.

In 2016, the number of these foreign players reached its peak, with seven of the 10 schools enlisting a total of 11 foreigners, mostly Africans. 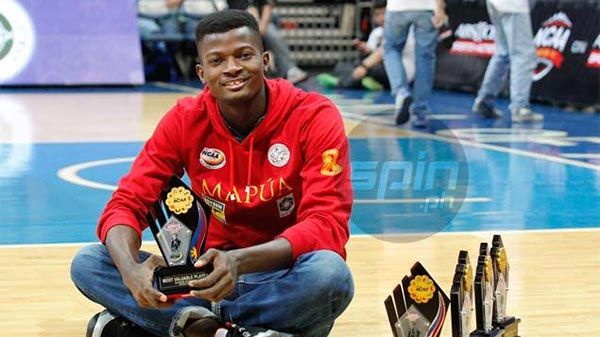 It was also in the same year in Season 92, where the league's Mythical Team, whose composition was based purely on individual stats, featured only one Filipino in Arellano's Jio Jalalon. Joining him were Cameroonians Tankoua of San Beda and Hamadou Laminou of Emilio Aguinaldo College, and Nigerians Bright Akhuetie of Perpetual and Mapua's Allwell Oraeme, who was also named MVP.

That incident sparked the discussion - and the eventual prohibition - of foreign players in the NCAA.

The general perception was that these players were mercenaries - nothing more than players who were in the country for the money paid by schools which are looking to reinforce their varsity sides with veritable imports.

Moreover, there was also the belief that the foreign athletes denied local players not just spot in the schools' lineups but also a chance to shine.

On the contrary, Tankoua said they helped local players improve their games.

"They stepped up their game to a lot of foreign players," said Tankoua. "You see Damie (Cuntapay) and Kemark (Carino), they defend us in practice. If you can defend me every time, every day in practice, why are you going to be scared of the other team's big man? We helped them improve." 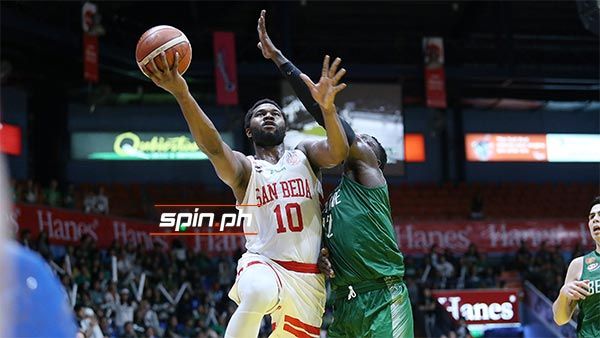 Nzeusseu echoed those sentiments, saying, "I believe that the foreign players are helping Philippine basketball especially when they go to Fiba or the other leagues."

"(The Filipino players) compete against imports and basically they're from Europe, from the United States. So having the Filipino players play against foreign players as early as the NCAA, that kind of gets you used to become competitive in this type of game, the physicality, and the athleticism of the foreign player. So I believe that the time that before that rule was employed in the NCAA, it was great for Philippine basketball."

Players like Calvin Abueva, Ian Sangalang, Raymond Almazan got so used to testing their mettle against these foreign players during their collegiate days in the NCAA before taking on imports in the PBA.

While the schools benefitted from the presence of foreign players, they assert having done their part in helping the locals step up their games.

As for those who thought these players didn't take their studies seriously, well they'd be surprised to know that most of these foreign athletes are about to earn their degrees.

"We're studying," Leutcheu said, shattering the stereotype. "Everyone should be able to go everywhere, like the local Filipino athletes who study abroad. If the Philippines decide to stop allowing foreign student-athletes to get here, imagine if the other countries also do it the same way. What is it gonna do?"

"There's a lot of people out there having the same chances of getting here. So it's pretty sad that Filipinos are trying to ban that chance for foreign student-athletes. It's pretty sad."

Tough as the ruling was for these foreigners, they know it was not their decision to make.

"They decided already. We can't do anything about it," said Tankoua, who was named as the NCAA's Best Foreign Player this year -- the first and only time the trophy was handed out by the collegiate league.

"We have to abide by whatever decision they're making," said Nzeusseu, who was also named as the Best Defensive Foreign Player for this past season.

The NCAA ban on foreign student-athletes has divided public opinion. But now that the axe has fallen, these players hold no bitterness in their hearts. Only gratitude.

"I still have a life to make, so I’m just gonna go ahead and do what I have to do, what I’m supposed to do and what God prepared for me. That’s not really sad if everything happened the way He wanted," said Tankoua.