AT around this time last year, Boyet Fernandez found himself without a job after he was replaced by Yeng Guiao at PBA ballclub NLEX - a team he had coached since its inception in the D-League.

One year later, Fernandez was being feted on the shoulders of his players at San Beda after guiding the Red Lions to another NCAA championship, his third as the coach of the squad.

What a difference a year makes.

Fernandez had a relatively respectable outing at NLEX, leading the Road Warriors to five quarterfinal appearances in six conferences. But he himself considers his campaign with the PBA squad as a failure.

"What happened last year was so bad that I thought I would never coach again," said Fernandez.

That was why Fernandez was so grateful that San Beda patron Manny V. Pangilinan trusted him enough to bring him back to the Red Lions' lair after Jamike Jarin accepted an offer to coach National University.

"I will not argue with other analysts that I failed with NLEX... If Boss MVP didn't support me and trust me, I won't be in San Beda nung December last year. Sabi ko nga, when a door closes, the big gate of San Beda opened. Without San Beda, I wouldn't be here right now.

"They welcomed me with open arms. They really tried to adjust to my system. Again, it was tough for me with all the situations in the past. Siguro sana, maibalik ko 'yung tiwala ko sa sarili ko," said Fernandez.

After he was rehired by San Beda, Fernandez took the road to redemption.

He led a Cignal made up mostly of San Beda players to the PBA D-League Aspirants Cup title. The team also ruled the Foundation Cup while San Beda was preparing for the NCAA campaign. 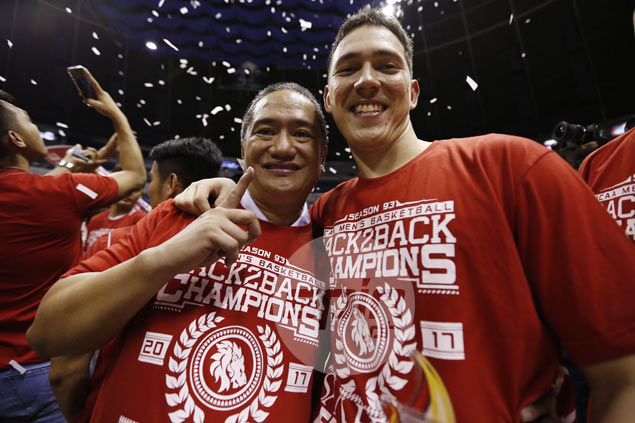 Fernandez guided the Red Lions to a 16-2 record in the just-concluded season. Their championship mettle also showed when they beat erstwhile unbeaten Lyceum in two games in the best-of-three finals.

"It was really Boss MVP who lifted me up. It was also coach Chot who gave me advice. It was coach Jude who gave me advice for the (Lyceum) press. We had a press drill that really helped us in the LPU game. Without coach Jude, baka hindi rin namin na-break press nila," said Fernandez.

If he has his way, Fernandez said he wants to coach San Beda forever.

"Sana, I will continue to coach San Beda. It's up to the bosses what their decision will be. But if I would be asked if I will stay with San Beda, puwede ba lifetime na?"