NEW ORLEANS — Zion Williamson was supposed to be making his highly anticipated NBA debut by sometime next week, if not earlier.

That looks unlikely now, given the overall No. 1 draft pick has yet to practice with the New Orleans Pelicans since having surgery to repair the lateral meniscus in his right knee on Oct. 21.

The reeling Pelicans could certainly use him. They’ve lost 10 straight heading into Friday (Saturday, Manila time) night’s game at Philadelphia to fall to 6-19, but coach Alvin Gentry said this week that he could not forecast a return date.

“We’re not going to rush anything with him,” Gentry continued. “We’re going to be overly cautious.”

Williamson’s initial prognosis was for his rehabilitation to last six to eight weeks. This Monday will mark eight weeks since surgery.

“We have been much more cautious with him in terms of how quickly we’ve ramped him up from stage to stage because he’s 19 and he’s still growing and he was 285 pounds when he had the surgery,” said David Griffin, the Pelicans executive vice president of basketball operations, during a recent game broadcast on Fox Sports New Orleans. “But there’s been absolutely no setback and no other mission afoot than to get him on the court as soon as possible."

Griffin also has said Williamson won’t play on consecutive nights in the early days after his return to he court.

Caution is understandable considering the long-term potential of the 6-foot-6 Williamson, who took college basketball by storm in his lone season at Duke and who hardly seemed to have trouble adjusting to the NBA during the preseason. He averaged 23.3 points and 6.5 rebounds in four games, went right at high-respected defenders including Utah’s Rudy Gobert and had his share of above-the-rim highlights. 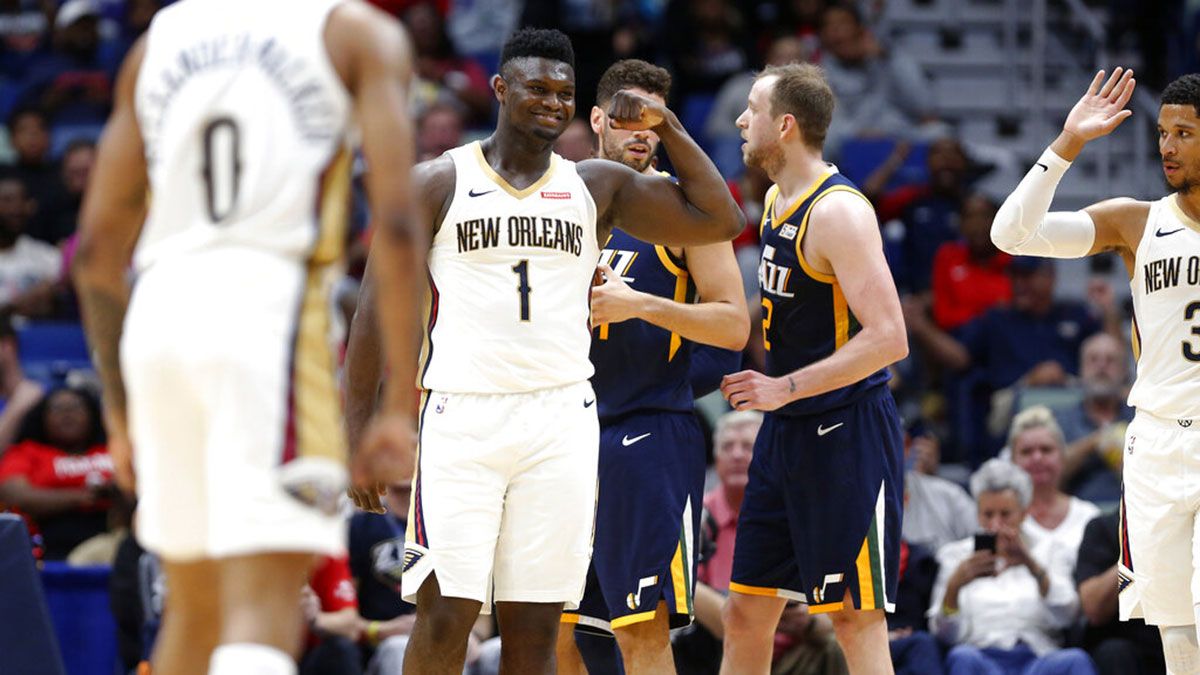 Pelicans players say they have urged Williamson to practice patience during his rehabilitation, but they also express excitement over the effect they expect him to have when he is able to play.

“I told him to play the same way when he gets back. Don’t change. Keep putting pressure on the rim and when guys collapse in, kick out for open 3s,” Pelicans guard Lonzo Ball said, referring to Williamson’s showing in the preseason.

“You saw what he did” during preseason, Ball continued. “We could definitely use that.”

Guard Frank Jackson said getting Williamson back will be “huge.”

“Any time he’s on the floor, he’s a threat to anyone,” said Jackson, who also played at Duke. “So we’re looking forward to getting him back.”

The Pelicans’ brass, however, has sought to take pressure off of Williamson.

“We expect for him obviously to inject some energy into our team and do some things like that, but we don’t expect that all of a sudden he’s going to be the cavalry and everything’s going to change,” Gentry said. “We have to change before he gets back on the floor and he would just be an additional positive thing.”

Gentry said Williamson has remained highly engaged with the team, watching every practice, walking through offensive and defensive sets with coaches and even verbalizing frustration after losses. He’s even traveled to road games recently, and Gentry said a lopsided loss in Dallas last Saturday “bothered him as much as anybody.”

“I do think he’ll be more of a voice,” Gentry said. “For the most part, obviously, we’ve got really quiet guys, but I don’t see him being a quiet guy.

“He’s not afraid to speak his mind. It’s just one of those things where he’s just who he is and he’s a natural,” Gentry continued. “The players will embrace that, too, because he’s a good guy and he’s here every day.”