Zach LaVine finally in playoffs as Bulls take on Bucks

CHICAGO — Zach LaVine has an Olympic gold medal, All-Star selections the past two years and a pair of slam dunk contest championships.

When it comes to postseason appearances, his resume has a glaring omission. And with the Chicago Bulls in the playoffs, that's about to change.

"About time," he said, laughing.

LaVine finally gets a chance to play in the playoffs with the Bulls set to meet Giannis Antetokounmpo and the defending NBA champion Bucks. Their first-round series opens at Milwaukee on Sunday (Monday, Manila time).

Chicago finished sixth in the Eastern Conference at 46-36 for its first winning record since the 2015-16 team went 42-40. The Bulls made the playoffs for the first time since a first-round knockout by Boston in 2017. And they ended a string of four consecutive losing seasons.

They also endured a COVID-19 outbreak along the way and a rash of injuries, including a sore left knee that left LaVine in and out of the lineup the past few months. But they come in on a 7-15 slide, a sour ending to a breakthrough regular season.

Even so, this is a big step for the Bulls — and LaVine. In his first seven seasons with Minnesota and Chicago, he never played on a team that won more than 31 games. But with the front office led by Arturas Karnisovas surrounding him with a competitive roster, that changed in his eighth year.

The arrival of All-Star DeMar DeRozan, Lonzo Ball and Alex Caruso last summer, along with Nikola Vucevic from a trade prior to the deadline last year, altered the Bulls' direction in a dramatic way.

It led to LaVine playing on a winning team for the first time since his lone season at UCLA. The Bruins went 28-9 in 2013-14 under Steve Alford and lost in the Sweet 16 of the NCAA Tournament to a Florida team coached by Billy Donovan. Now, with Donovan in his second season in Chicago, they're on the same side.

"Everybody's got to play the cards they're dealt," LaVine said. "It just took me a little bit longer than anybody else. I didn't cop out and go to a different team." 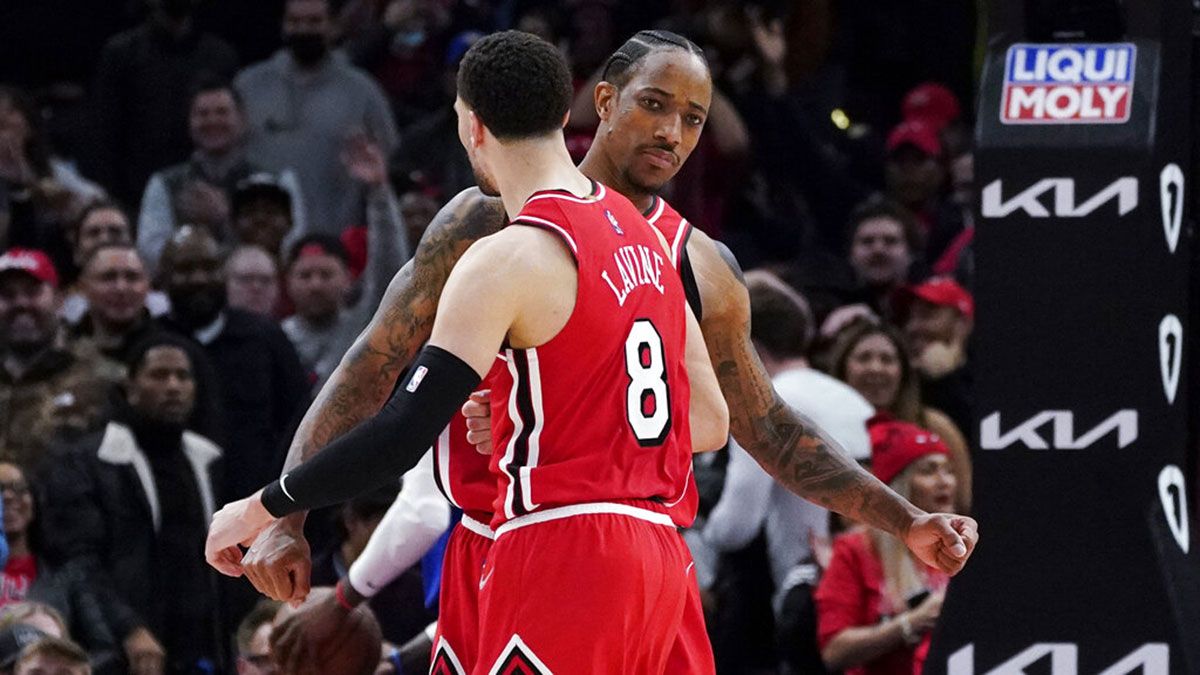 The Bulls went 46-36 for the No. 6 seeding in the Eastern Conference.

LaVine, who came to Chicago in the 2017 draft-day trade that sent Jimmy Butler to Minnesota, had a four-year, $80 million deal from Sacramento matched by the Bulls in July 2018. With his contract set to expire, he figures to land a huge deal in the offseason.

But there are more immediate issues at hand.

The closest LaVine has come to the court in the playoffs until now was as a spectator. He has attended a handful of postseason games, including some in the 2016 and 2017 finals between the Golden State Warriors and Cleveland Cavaliers.

"I think it's going to be extremely intense, especially in Milwaukee playing the defending champs at (their) home, Game One," he said.

LaVine won a gold medal playing for the United States at the Olympics last summer. He followed that up by making his second straight All-Star team.

Though he averaged 24.4 points, LaVine was limited to 67 games. And he acknowledged he probably won't be completely healthy again this season.

LaVine has been using the time since he last played on April 8 to get as close to 100 percent as he can, participating in practices and getting treatment in his downtime.

"It gets better with rest," he said of his nagging knee injury. "Obviously, the more pounding and impact you put on it, it trends to get a little more tired, a little more sore. But it's good right now. It feels good."