Clint Capela backed up his confident words from a day earlier with 14 points and 15 rebounds for the Hawks, who will play the top-seeded Philadelphia 76ers in their first trip to the Eastern Conference semifinals since 2016. That series begins on Sunday.

Young never looked like a playoff rookie, hitting the winning shot with 0.9 seconds left in the opener and scoring at least 20 points in every game. He made a 3-pointer with 43 seconds left for a 15-point lead, then stood at midcourt and bowed to the crowd that jeered him all series.

The profane chants toward the point guard were less frequent than in Games One or Two. Young was never rattled by the fans, one of whom was banned after spitting on Young in Game Two.

Now he has silenced them for the summer.

Julius Randle had 23 points and 13 rebounds for the Knicks to finish his disappointing first postseason. The winner of the NBA's Most Improved Player award shot 8 for 21 from the field and finished 28 for 94 (29.8%) in the series.

He led the Knicks to a 41-31 record in their first season under Tom Thibodeau, with a pair of 40-point games during a three-game season sweep of Atlanta. But the Hawks were by far the better team in this series, with only a poor second half of Game Two keeping them from a sweep.

That continued a strong surge for the Hawks, who went 27-11 after March 1, when Lloyd Pierce was fired and replaced by interim coach Nate McMillan.

They won the two games in Atlanta easily and returned to New York confident they could close it out. Capela downplayed the Knicks' attempts to play physically, saying the Hawks could do that and also win the games.

Both coaches shrugged off the tougher talk but it seemed clear the players' emotions had risen. Words were exchanged after Taj Gibson's flagrant foul on De'Andre Hunter in the second hunter, and players had to be separated at halftime after the Knicks' Nerlens Noel and Atlanta's Solomon Hill bumped into each other as the teams were exiting the floor.

Noel, Randle and Hill were given technical fouls. Young made a free throw on one of them before play began in the third quarter to give Atlanta a six-point lead.

Randle then made a 3-pointer to cut it to 53-50, but the Knicks would make only four more baskets the rest of the quarter. Nine straight points by the Hawks made it 62-50 when Bogdan Bogdanovic made a 3-pointer, snapping Atlanta's 3 for 20 start behind the arc.

The margin remained at 12 after three, with Randle with seven field goals but seven turnovers at that point.

The Knicks couldn't make much dent in the final quarter, with even Spike Lee giving up and leaving with a little more than 3 minutes to go, and went weakly in their first postseason since 2013. 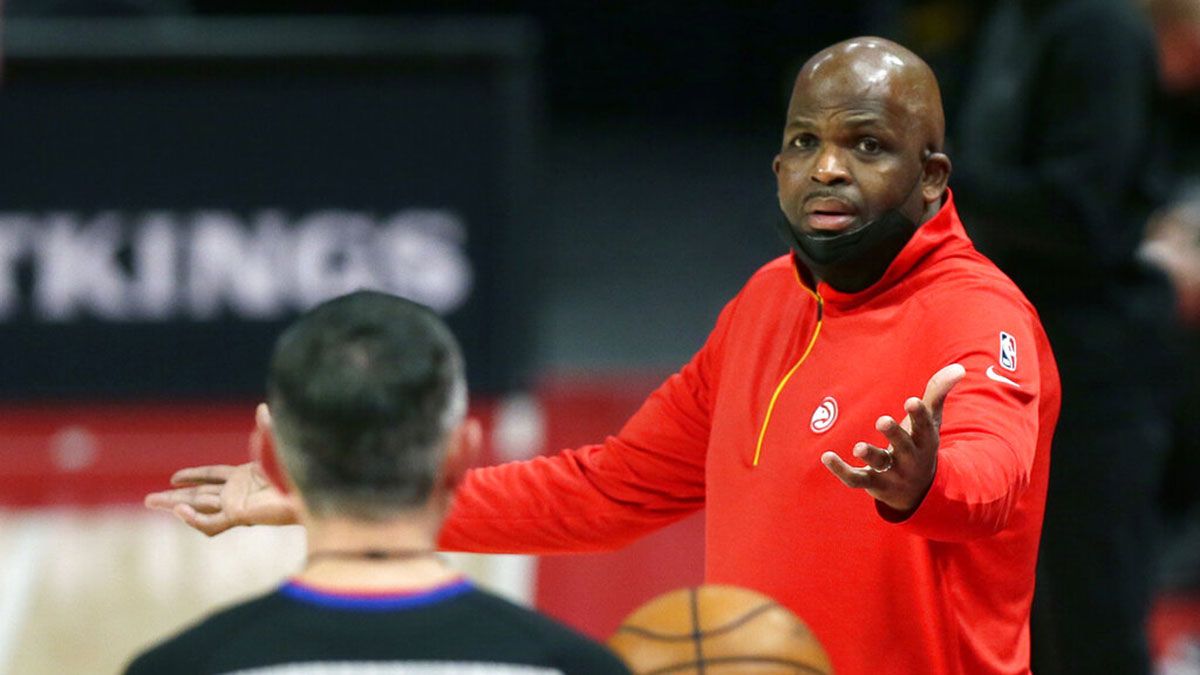 Knicks: RJ Barrett scored 17 points. ... Derrick Rose, moved into the starting lineup during the series, was just 3 for 11 for six points.

Marv Albert called the game for TNT, his first time working on site since the All-Star Game and perhaps a last at Madison Square Garden for the longtime Knicks broadcaster who is retiring after the Eastern Conference finals. Albert began calling Knicks games on the radio in 1967 and began doing their games on TV for MSG Network in 1986 until he and the organization parted in 2004.

Both coaches in the series were assistants on the U.S. Olympic team under Mike Krzyzewski, who will coach his final season with Duke in 2021-22.

McMillan was on Krzyzewski's staff when the Americans won gold in the 2008 and 2012 Olympics. Thibodeau was on the staff when the US won a third straight gold in 2016.

"Obviously, legendary. Not only an all-time great, maybe the greatest, but he's an even better person," Thibodeau said. "He's just an amazing leader, an amazing person and to do it as well as he's done it as long as he's done it, it just speaks volumes as to who he is."