PHILADELPHIA — John Collins got a trip to the Eastern Conference finals — and an XL last laugh — in Philly.

Collins sat down for an interview after a victorious Game Seven wearing a T-shirt emblazoned with a photo of himself dunking on Philadelphia's Joel Embiid from earlier in the best-of-seven series.

Embiid had been known through the years for poking fun at his foes so much on social media that he even changed his Twitter handle to Joel "Troel" Embiid.

Collins won the troll game, and one-upped Embiid and the 76ers on the way out of town.

In Philly, the Hawks got to Bust the Process.

There was plenty of time to exhale and enjoy a few laughs in the locker room after the Hawks won three times in Philadelphia and advanced to only their second Eastern Conference finals in the last 50 years. Atlanta advanced with a 103-96 victory over the top-seeded 76ers in Game Seven. The Hawks also won Game One and Game Fibe in Philadelphia.

The Hawks will open their first East finals since 2015 against the Bucks on Wednesday night in Milwaukee (Thursday, Manila time).

"The confidence is gonna remain the same," star guard Trae Young said. "Everybody is happy we made it to the Eastern Conference finals, but we're not satisfied. It's great that we're here, but we have some games to win."

After series wins in New York and Philadelphia, who's going to count out the Hawks now?

Ok, there's still some convincing among the oddsmakers, where the Bucks opened as the early 7.5-point Game One favorites, according to FanDuel Sportsbook.

But on the court, the Hawks are cooking and ready for an East final no one could have expected. You wanted Brooklyn-Philly? How about the fifth-seeded Hawks against the third-seeded Bucks. The Bucks went 2-1 in the season series.

"This is a big accomplishment for us, for this team, for where they started the season and to be gong to the Eastern Conference finals," coach Nate McMillan said. "We beat two really good teams."

Atlanta went 20-47 last season and finished in a virtual tie for last in the Eastern Conference, percentage points ahead of Cleveland. The Hawks were one of eight teams excluded from the NBA's restart.

Now, they're one of the last four teams standing.

Just 14-20 when they fired Lloyd Pierce on March 1, the Hawks took flight under McMillan and are 36-15 over that span. 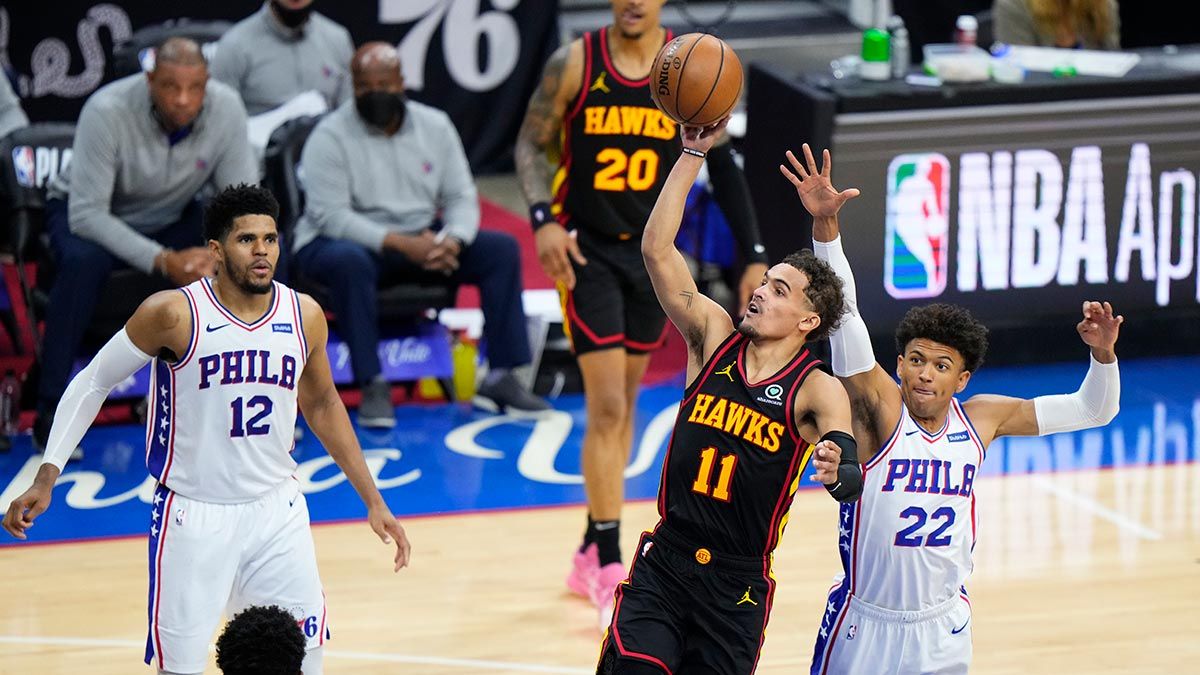 Young led the Hawks to their first playoff berth since 2017. He became a New York tabloid sensation as the confident point guard who tormented the Knicks, and then he did a number against the Sixers. Even in Game 7, when Young was 5 for 23 from the floor (2 for 11 on 3s), he kept shooting until the end and eventually connected on a late 3-pointer that pushed the lead to 93-87 with 2:31 left.

"I always want to make plays for my teammates, but it's the nature of the game," Young said. "Sometimes it's not your night and it's great that guys stepped up."

Kevin Huerter scored 27 points in Game 7, Danilo Gallinari had 17, and Collins had 14 points and 16 rebounds. Oh, and that off night from the floor by Young was offset in part by 10 assists.

If none of those names seem familiar to even the casual NBA fan -- and by this point, they should -- consider, the Hawks made it to the conference finals without an All-Star.

Think Embiid and Ben Simmons would have traded their nods for another round in the playoffs?

The Sixers are headed into a summer of uncertainty after their No. 1 seed and homecourt advantage failed to get them to the East final for the first time since 2001.

The Hawks are headed into a few days of playoff prep with a belief that this postseason run isn't over yet.

Now, bring on another road trip.