MINNEAPOLIS — Karl-Anthony Towns scored 15 of his 25 points for Minnesota in the first quarter, before fouling out in frustration and being forced to watch the Timberwolves hang on for a 96-89 victory over the New Orleans Pelicans on Saturday night (Sunday, Manila time).

Anthony Edwards had 14 of his 19 points in the first half for the undefeated Timberwolves, who leaned on their defense and forced a franchise-record-tying 30 turnovers by the Pelicans.

Brandon Ingram scored 30 points — with seven turnovers — and center Jonas Valanciunas had best game with his new team with 20 points and 17 rebounds. The Zion Williamson-less and winless Pelicans shot just 9 for 40 from 3-point range. Nickeil Alexander-Walker was 2 for 13 from deep and 6 for 24 overall, grabbing 14 rebounds to go with 14 points.

D'Angelo Russell snapped out of his slumber for the Timberwolves down the stretch with a pair of critical 3-pointers to help hold off the visitors.

After a fadeaway by Ingram cut the Minnesota lead to four points and Towns' backup Naz Reid airballed a 3, Alexander-Walked missed his heave from behind the arc. Then Russell pulled up and fired off a top-of-the-key rainbow with 25 seconds that left banked and rimmed in for a 94-87 lead.

Russell, who had 22 points in the opener, went 5 for 14 from the floor and finished with 12 points and only three assists.

With the Pelicans again badly missing their franchise player Williamson, who's recovering from surgery on a broken right foot, new coach Willie Green was wincing often during a ragged first half.

Towns, who had only four rebounds while the Pelicans had a 61-47 advantage on the glass, fed Edwards for a slick reverse layup with a pivot and a bounce pass from the top of the key as the Timberwolves took a game-high 54-37 lead late with 1:28 left in the second quarter.

After a rousing 124-106 victory over Houston to start their season on Wednesday, when they built a lead as big as 35 points, the Timberwolves had far less success running their offense with not nearly enough production outside of Towns and Edwards. 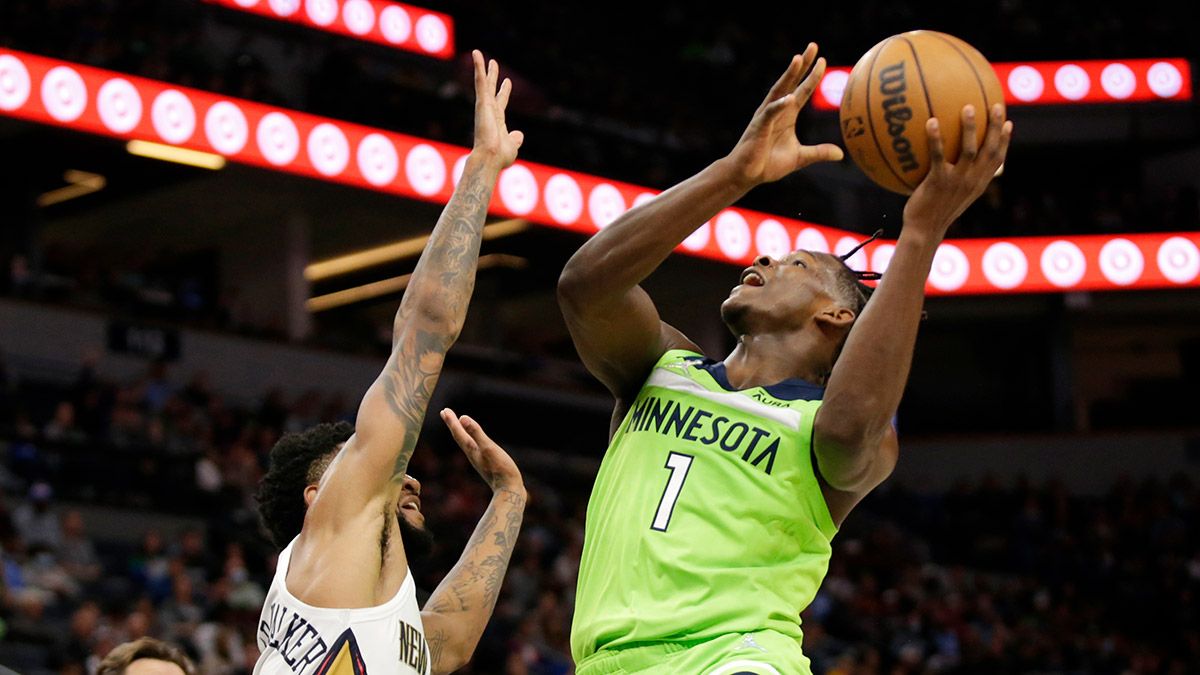 Anthony Edwards shoots 8 for 22 in 37 minutes of play.

Towns picked up his fourth foul halfway through the third quarter as the Pelicans hustled and muscled their way back in the game. The rest of the Timberwolves went 3 for 15 in that period.

Valanciunas sank a pair of free throws to cap a 10-0 run and tie the game at 63-all, but they were never able to take the lead after that, another box checked for Minnesota's improving defense.

Jarred Vanderbilt stole a pass from Garrett Temple with one hand at the top of the key and started a fast break — the Timberwolves had a 21-7 edge in transition points — the other way that Naz Reid finished with a finger roll at the horn for a 69-67 edge.

Towns backed down Valancuinas and drew a foul for a three-point play with 8:47 left and an 80-68 lead, but he tried to bull his way past Trey Murphy III a few minutes later and was this time called for the charge. Towns picked up a technical — and his sixth foul — for storming off the court and knocking over a chair, startling a fan in the expensive seats in the process.

Williamson's absence negated what would've been consecutive matchups between the first overall pick in both the 2019 and 2020 drafts. Williamson has played in only 85 of 147 games because of injuries. Edwards has yet to miss a game.

Pelicans: Rookie Herbert Jones, the team's second-round draft pick, started again at small forward for Josh Hart (right quadriceps), who was hurt in the opener on Wednesday and missed his second straight game. Jones had eight of New Orleans' 61 rebounds and had two points in 29 minutes.

Timberwolves: Patrick Beverley made his debut after serving a one-game suspension for the opener and had five points and six assists in 22 minutes. He went 1 for 5 from 3-point range.

The Pelicans stay in Minnesota for the game on Monday, before returning to New Orleans to host Atlanta on Wednesday.

The Timberwolves, following the rematch with the Pelicans, play at defending NBA champion Milwaukee on Wednesday, their only road contest in their first eight games.