BOSTON — In the fog of the Celtics' Game Five loss to Milwaukee that dropped his team into a 3-2 series hole, Boston coach Ime Udoka made a prediction.

"It'll make it sweeter when we bounce back," he said.

The Celtics will face top-seeded Miami beginning Tuesday in a rematch of the 2020 East finals. The Heat beat the Celtics in six games in that series at Walt Disney World.

Tatum said his team embraced the "backs against the wall" moments it faced in having to win the final two games after their late collapse in their previous home game.

"As much as it hurt to lose Game Five, I was looking forward to that challenge," Tatum said. "I believe in myself, I believe in this team. I expected to play the way I did and for us to respond the way we did."

The Celtics trailed early in Game Seven before outscoring the Bucks 61- 38 in the second half to cruise to the victory. Boston used a whopping 54-point advantage from behind the arc to improve to 25-9 in decisive seventh games.

Williams was timid early, missing 5 of his first 7 3-point attempts. It was a pep talk he got from Jaylen Brown during a timeout after Williams passed on a open shot that changed his mindset.

"For me it was like, they're encouraging it, I might as well take advantage," Williams said. "Each one as time got on got more comfortable." 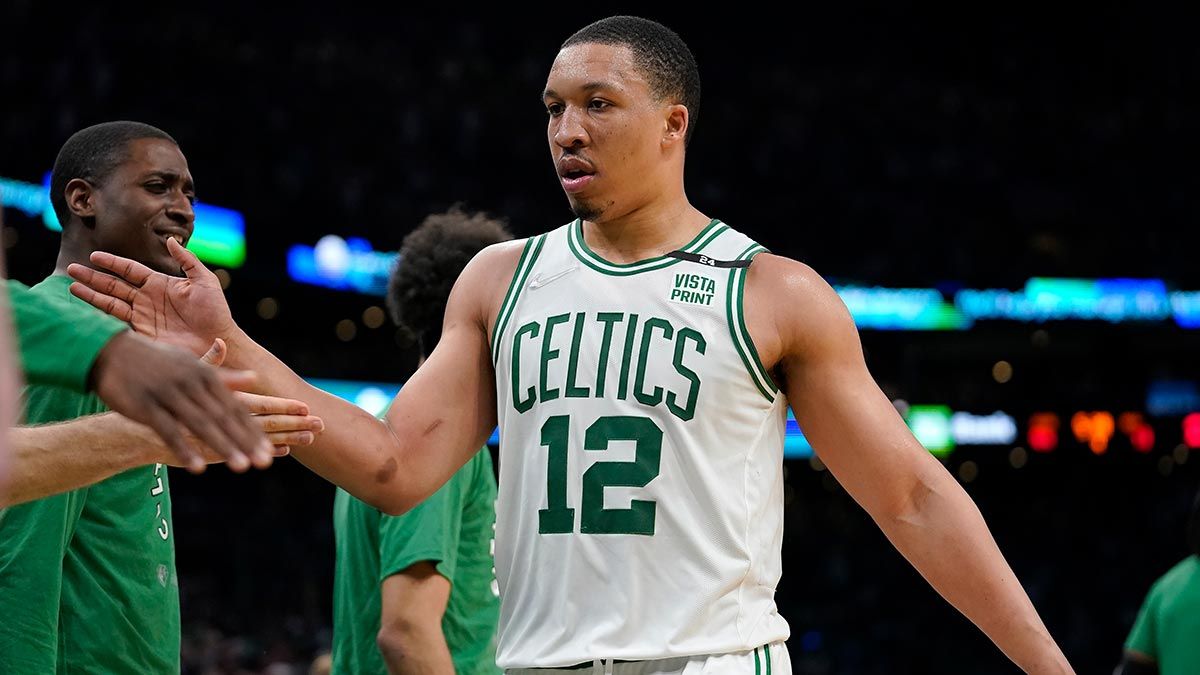 Grant Williams goes 7 for 18 from beyond the arc.

It helped silence another relentless night from Bucks star Giannis Antetokounmpo, who had 25 points, 20 rebounds and nine assists. But he was just 3 of 11 in the paint in the second half, including 1 for 6 the fourth quarter.

"Shots that I usually make wasn't going in. That's basketball. That's sports," Antetokounmpo said. "Sometimes you win. Sometimes you lose. There's a winner. There's a loser. You've just got to live with it."

It was 63-53 when Tatum went to the bench after being whistled for his fourth foul. But the Celtics rallied without him, outscoring the Bucks 16-11 the rest of the quarter to take a 79-64 lead to the fourth.

Udoka said he's mostly been able to maintain tunnel vision throughout his first season as a head coach, but said he allowed himself to take in the roar of the TD Garden crowd in the closing seconds.

He said being able to have Game Seven at home mattered. The Celtics won on the final day of the regular season to earn it for this matchup when the Bucks rested their regulars and were blown out 133-115 by Cleveland.

"This is what we played for, why we played the season out, to have home-court advantage in a Game Seven," Udoka said. "If you believe in the basketball gods, those things matter."

Brown said their coach has been the catalyst to put them in this position.

"We didn't want it to be over. We didn't overcome all the stuff we did during the regular season for that to be it. .. At the end of the day, we wanted to come out, leave it all out there. I think we did."

Bucks: There was a pregame moment of silence held for the victims of mass shootings this past week in Milwaukee and Buffalo. … F Khris Middleton missed his 10th straight playoff game with a sprained medial collateral ligament in his left knee. … Milwaukee missed their final 11 3-point attempts of the first half.

Celtics: Were 9 of 22 from the 3-point line in the first half. … Patriots team owner Robert Kraft sat courtside, along with Patriots quarterback Mac Jones and receiver Kendrick Bourne.

Celtics center Robert Williams III was available to play after missing three straight games with soreness and a bone bruise in his surgically repaired left knee. But he didn't play.