'Thank you, Vlade' card in order as Pelicans bound to take flight after Cousins deal

CHICAGO - The defense had more holes than a wedge of Swiss cheese. The lay-ups and alley-oop dunks were unencumbered, while the three-point line was as open as a free port.

Both teams shot a combined 122 triples, sinking 43. Sixty-two points were scored down the paint while 58 more were made on fastbreaks. In a contest that saw more love taps than fouls, the West triumphed over the East, 192-182.

The annual NBA All-Star Game has had its share of controversies in recent years, but it has never been accused of playing hard-nosed defense. More so after the 2012 All-Star Game where a hard foul by Dwyane Wade busted Kobe Bryant's nose at the Amway Center in Orlando.

When there's nothing at stake and the stars are just chilling while waiting for the second half of the season and the playoffs to unfold, there is no incentive to play like their livelihoods are on the line.

This helps explain why the 66th NBA All-Star Game was played cavalierly last Monday at the Smoothie King Center in New Orleans. Unless changes are made, where a carrot is dangled to induce competitive fire, the league's showcase will always be more about the competitors and far less about the competition. 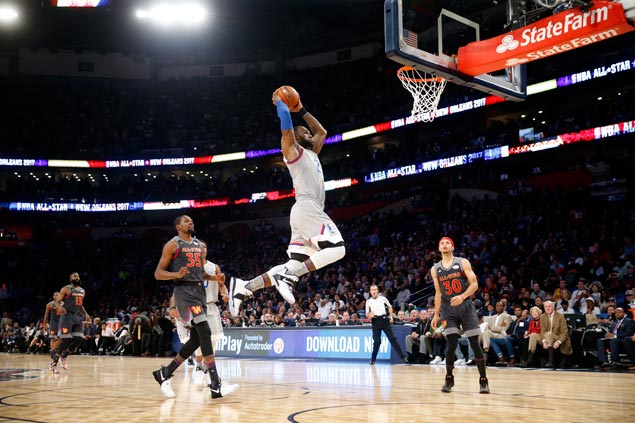 Although the old timers and basketball purists frowned at the defense-less display of hoops, the 2017 All-Star Game was a stunning commercial success.

Broadcast in 215 countries and territories in 49 languages, the spectacle was sold out and 15,701 fans paid an average of US$ 1,007 for their tickets, according to Ticket IQ.

The media came in droves, too, including 345 international sportswriters from 43 countries and territories. Per the Associated Press, an average of 7.8 million viewers watched the game on cable television network TNT here in the US, the most since 2013.

The moral of this basketball story is to enjoy the All-Star Game as a exhibition and not to expect the match to be as fierce as the playoffs or the NBA Finals.

Otherwise, you will be heartbroken. Just like those many hopeful romantics who go to dating websites looking for the right love at the wrong place. 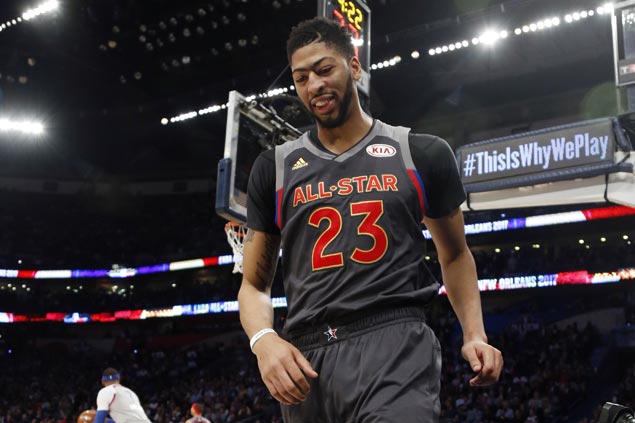 DISTANT COUSINS. The acquisition of assets that are of equal or more value than the ones you're parting with is the whole premise of trading players in the NBA. After all, the goal is team improvement.

In packaging DeMarcus Cousins to the New Orleans Pelicans for three players plus a first and second-round pick in the 2017 draft, the Sacramento Kings did neither. They did not trade their best player, they simply gave him away. And the team certainly got worse than their already miserable, lottery-bound 24-33 record.

The Kings needed "a culture change," GM Vlade Divac told reporters as he explained why he had to pull the trigger. Sure, but to borrow an old line, did he have to "burn the house down to kill a rat?"

Cousins is by no means a model employee. With a temper that is as explosive as his first step, the 6-foot-11, 270-pound center has amassed an astounding 105 technical fouls in his five NBA seasons. He has been suspended once, ejected 12 times and has fouled out of games on 205 occasions.

Still, the Kentucky alum is a three-time All-Star, and at age 26, is just approaching the prime of his athletic life. He might have more baggage than PAL flight 101, but he's still worth more than Buddy Hield, Tyreke Evans, Langston Galloway and two picks combined.

As for the Pelicans, who are already well-armed with Anthony Davis leading the charge, it's no guarantee that they will make this year's playoffs. What is certain though is that these Pelicans will reach elite status next season once Cousins and The Brow learn to play with each other.

And when that happens, a thank you card to Divac is in order.