The reigning NBA scoring champion even secured a key rebound with 36 seconds left before calmly converting a pair of free throws with 4.7 seconds on the clock.

Curry threw his arms up in sheer delight, waved to acknowledge the adoring fans as shot after shot dropped through the net and screamed in celebration — no trash about it.

Chants of "MVP!" began late in the first, and by the time the buzzer sounded to finish the initial period, Curry already had topped his total from two nights earlier with 25 points on 9-of-9 shooting and five 3-pointers as Golden State built a 44-27 lead.

The two-time MVP shot just 5 for 21 — making 2 of 8 3s — on the way to 21 points in a season-opening road win at the Lakers on Tuesday night in a performance that he called "trash." 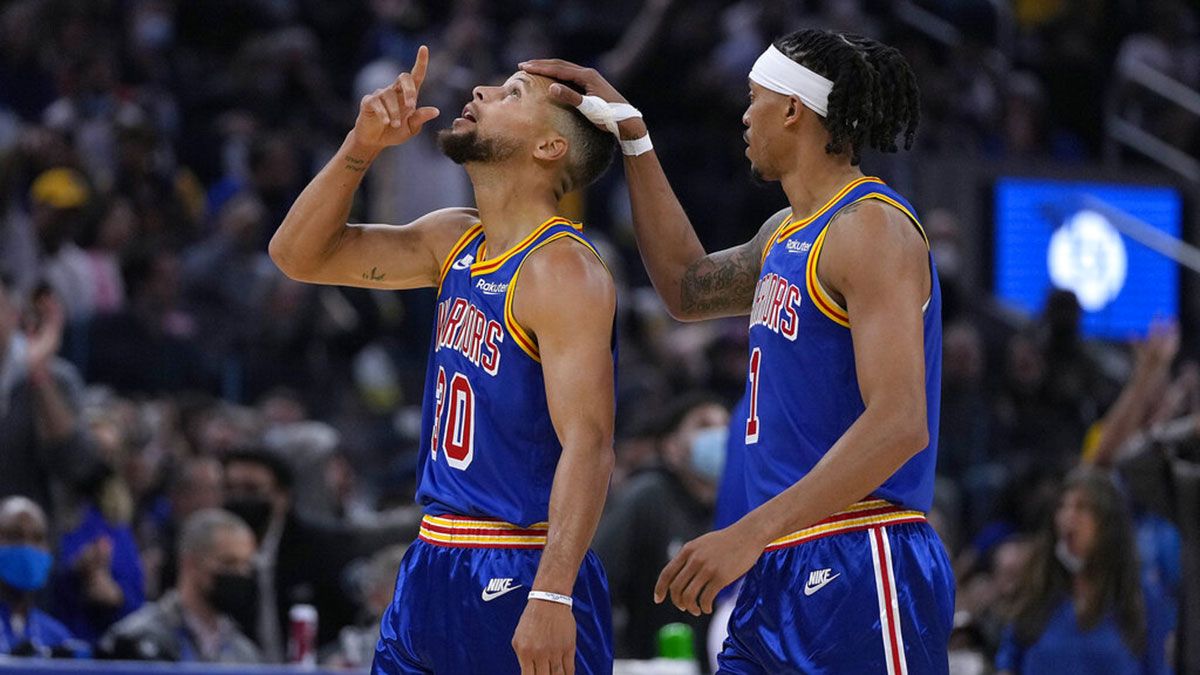 Damion Lee hit a go-ahead 3-pointer with 5:55 remaining and scored 11 points off the bench while Andrew Wiggins added 17 points and six rebounds.

Paul George had 29 points, 11 rebounds and six assists in the Clippers' season opener, and Eric Bledsoe scored 22 points. Los Angeles fought back from a 19-point deficit in the second quarter to take a 67-66 lead into halftime while capitalizing on Warriors' turnovers.

The 33-year-old Curry, who earlier in the day was named one of the top 75 NBA players of all time, dazzled in the first home game of his 13th NBA season after taking the mic before tipoff and thanking the fans for their support and patience through the coronavirus pandemic and welcoming them back to Chase Center.

He returned with 7:43 left in the second, made another jumper and finally missed a 3-point try at the 4:55 mark.

"This is going to be a great, great season back in Chase Center," Curry told the crowd before tipoff, adding, "Can't wait to welcome Klay Thompson back."

Draymond Green exited in the third and headed to the locker room with an apparent injury having missed six of seven free throws but later returned.

This is a new beginning of sorts for the Warriors, who lost in the play-in game to Memphis, given they finally have fans back at the start of a season.

"Two years ago was such a bizarre season with all the injuries and the brand-new venue. It did seem strange," coach Steve Kerr said. "Last year the whole world was strange. It does feel like a fresh start."

Clippers: George received a technical foul 2:21 before halftime. ... The Clippers took care of the ball, committing only seven turnovers while taking advantage of the Warriors' mistakes. ... LA, which had its highest 3-point percentage in franchise history last season at 41.1%, shot 6 for 16 from deep in the first half and 14 of 40 overall.

Warriors: Curry's 25 points in the first matched a career high for that quarter. ... Golden State committed 21 turnovers, six by Curry and seven from Jordan Poole. ... Forward Andre Iguodala received a rousing ovation when introduced before the game and again when he checked in for the first time late in the firsts quarter. The 37-year-old Iguodala, who helped Golden State win the 2015 championship on his way to becoming the NBA Finals MVP and then two more titles, signed a one-year deal. ... Thompson is working back from surgery to repair a torn right Achilles tendon and hopeful of playing in late November or early December.

The Warriors are honoring someone each home game during their 75th anniversary season, and it was Hall of Famer Al Attles for the opener.

The 84-year-old Attles presented the game ball to the officials before the game.

Clippers: Host the Grizzlies on Saturday in their home opener.

Warriors: At Sacramento on Sunday having lost their last two road games against former top assistant Luke Walton and the Kings.