MIAMI — Jordan Poole scored 30 points, and the short-handed Golden State Warriors scored the first 19 points of the second half on the way to beating the frustrated Miami Heat, 118-104, on Wednesday night (Thursday, Manila time).

Damion Lee, Jonathan Kuminga and Andrew Wiggins each scored 22 points for the Warriors, who got 11 points from Gary Payton II and 16 rebounds from Kevon Looney.

Kyle Lowry scored 26 points, Bam Adebayo had 25, Jimmy Butler finished with 20 and Duncan Robinson had 13 for the Heat. Miami shook off the huge Warriors run — and a huge dust-up on its bench during a timeout — to lead briefly in the fourth, then let the game slip away and had its lead in the Eastern Conference race trimmed to 1-1/2 games over Milwaukee.

Miami played without Tyler Herro, who got the night off because of a sprained left knee, and Gabe Vincent because of a toe contusion.

The Warriors were already without Stephen Curry because of a sprained left foot and Andre Iguodala with low back tightness, plus gave Draymond Green, Otto Porter Jr. and Klay Thompson the night off for injury management.

Golden State made that decision based on medical rationale and a desire to minimize the chance of injury going into the playoffs — not because of a frustrating loss at Orlando on Tuesday, coach Steve Kerr said.

"Just talking with the training staff and continuing the process of making sure our players who have been injured or who are recovering from injuries are getting the care they need and the rest they need and not subjecting them to risk," Kerr said. "These decisions are based on process, not on the results of the previous night's games."

Miami couldn't hit anything to start the second half. That's when the Heat contemplated hitting one another.

Golden State started the third quarter on a 19-0 run — capped by three 3-pointers from Poole from 31, 35 and 30 feet respectively, two of them banked in from just in front of the Heat bench to make a disastrous start even worse for Miami.

And during a huddle during a timeout during that Warriors' flurry, tempers flared on the Miami bench. Butler and Udonis Haslem exchanged words, both needing to be held back by teammates. Heat coach Erik Spoelstra appeared to have words with Butler as well.

Miami seemed to channel the anger.

Golden State wasn't flustered in the least. Back-to-back layups by Kuminga gave the Warriors the lead to stay, and a trio of 3-pointers — by Lee, Payton and then Poole — just about sealed things, putting Golden State up 105-95 with 4:21 left. 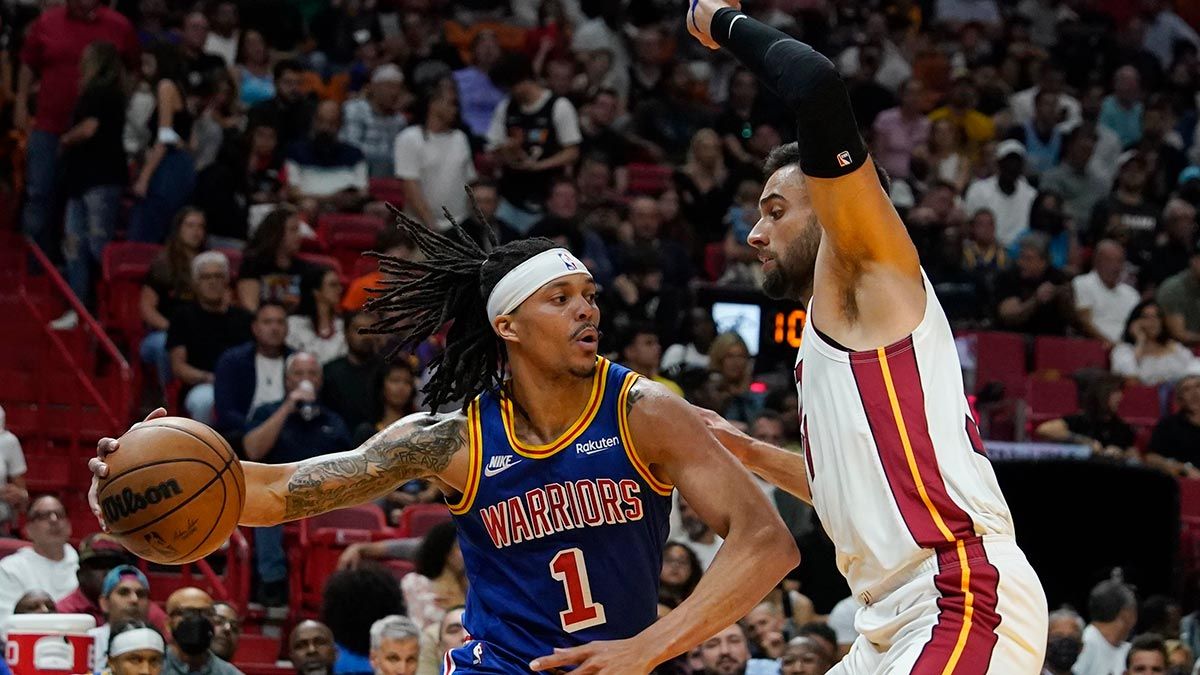 Warriors: Golden State improved to just 7-12 in its last 19 games. ... The Warriors won for the first time in their last four trips to Miami. Golden State's last win on the Heat home floor was Dec. 3, 2017.

Heat: Olympic sprinting legend Usain Bolt of Jamaica was in the crowd. ... It was the second straight loss to a short-handed opponent. Miami lost in Philadelphia on Monday when the 76ers were playing without James Harden and Joel Embiid.

Not only was the score tied 50-50 at halftime, but the score was also tied in each of the first two quarters -- 23-23 in the first, 27-27 in the second. It was just the second game in the NBA this season to be tied after one quarter and again at halftime; on Nov. 26, the Los Angeles Lakers and Sacramento Kings were tied 20-20 after one, tied 43-43 at the half, and they were just getting started. They were tied after regulation and two overtimes before the Kings prevailed 141-137 in triple-OT.

The Warriors have three more back-to-backs remaining — Sunday and Monday at Washington and Memphis to end this five-game trip, April 2 and 3 against Utah and Sacramento, then April 9 and 10 for regular-season-ending games at San Antonio and New Orleans. Thompson and Porter are almost certain to be held out of one game in each of those sets, Kerr said.