Celtics-Warriors a battle of teams built though NBA draft

SAN FRANCISCO — When Steve Kerr looks at the way the Boston Celtics built a championship-caliber team, he sees plenty of similarities to how his Golden State Warriors got to the NBA Finals in 2015.

Boston built a core through the draft by taking Marcus Smart, Jaylen Brown and Jayson Tatum during a four-year span from 2014-17 and added the necessary pieces to get over the hump this year to make it to the finals.

Waiting for the Celtics in Game One on Thursday night (Friday, Manila time) will be Kerr's Warriors, who are making their sixth trip in eight years led by the homegrown core of Stephen Curry, Klay Thompson and Draymond Green.

"Traditionally, this is how it's supposed to work in the NBA," Kerr said. "If you look over the years, you grow a team through the draft, you take your lumps through the playoffs, you climb up and then you get to the finals. Our team was built somewhat the same way. ... I think that's good for the sport."

That approach bucks a growing trend around the league of megastar movement as teams have tried to build more through free agency and trades than in the draft.

Both teams have eight players on the roster acquired originally in the draft and this is the first finals since Chicago-Utah in 1998, according to ESPN, when the top three playoff scorers from both teams made their NBA debuts with their current teams.

The similarities between the teams isn't complete, with the biggest discrepancy being experience. Led by Curry, Thompson and Green, the Warriors have a total of 123 games played in the finals on their roster compared to none for the Celtics, who lost in the Eastern Conference finals three times in the previous five years.

"There are obviously nerves and adrenaline and anxiety and nerves — like everything in terms of the emotions of playing at this stage," Curry said about his first finals appearance. "That first game is sometimes all over the place because of that. And once you settle in, it does become about basketball, like it normally is."

Celtics coach Ime Udoka, who was an assistant on two teams that went to the finals in San Antonio, isn't overly concerned, citing the experience his top players have gotten in the postseason in recent years.

Boston won two Game 7s just to get here this season, beating defending champion Milwaukee at home in the second round and winning at Miami in the conference final.

"I think once you get out of the initial media circus and the intensity and how everything is much more exaggerated, obviously it's not much different when you get on the court," he said. 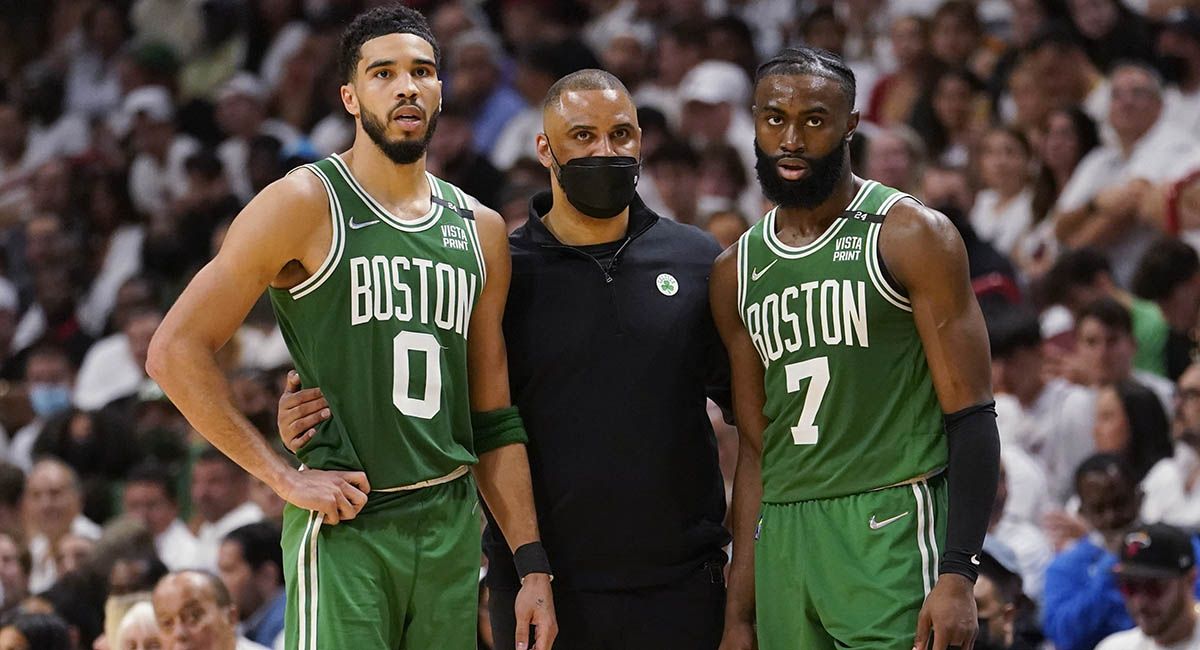 Ime Udoka looks to steer the Celtics to the title in his first season as head coach.

Udoka is the fifth coach since 2015 to make the finals in his first year as an NBA head coach, with three of the previous four winning it all. Kerr beat Cleveland's David Blatt in a battle of first-year NBA coaches in the 2015 finals and then lost to Ty Lue and the Cavs the following year. Toronto's Nick Nurse also won it in his first year as an NBA coach against the Warriors in 2019.

Before that, the only first-year coaches to win the NBA Finals since the 1950s were Pat Riley (1982 Lakers) and Paul Westhead (1980 Lakers).

Golden State owner Joe Lacob was a minority owner of the Celtics before taking over the downtrodden Warriors in 2010. At the time, he said he hoped the Warriors could rival the success of franchises like the Celtics and Lakers.

"We were trying to change the direction of this franchise at the time," Lacob said. "So the first thing you have to do is set goals."

With a chance at a fourth title in Golden State's sixth trip to the Finals in the past eight years, Lacob's lofty goals have become a reality but he's far from satisfied.

"It'll take a lot of years of ownership to even come close to what the Celtics have achieved in terms of all the fantastic decades of success," Lacob said.

Curry said early in the playoffs that he wanted the Warriors to find an identity at Chase Center in the 3-year-old arena's first playoff run. Golden State has done that, winning all nine games at home and outscoring the opposition by 14.6 points per game. The Warriors are the fifth team to go 9-0 or better at home leading into the Finals.

Both these teams have had success on the road, with Boston winning seven of nine games away from home so far and the Warriors having won at least one road game in a record 26 straight playoff series.

All three have been able to practice this week and are listed as questionable for Game 1. Iguodala has missed the last 12 games, Payton has been out for nine and Porter sat out the final two games of the Western Conference finals.

The Celtics are dealing with a significant injury of their own with center Robert Williams III hampered by left knee inflammation. Williams played the final four games against the Heat but didn't look at his best. He is listed as questionable.

Smart is off the injury report after dealing with a sprained right ankle last round.