SAN FRANCISCO — Stephen Curry, Klay Thompson and Draymond Green are cherishing this playoff run a little more given they spent the past two years watching the postseason instead of their familiar position chasing championships.

Now, with those experienced faces and a cast of new stars, the Warriors are headed to another Western Conference Finals and need just four more wins to give themselves a title chance again.

They will lean on the experience of Curry, Green, Thompson and Kevon Looney having been here so many times already.

"It's unbelievable knowing what we've been through these last two years and six of the last eight we have an opportunity to play for the finals," said Curry, who took his team to five straight finals from 2015-19. "I think me, Draymond, Klay, Loon, we've been in this position before. We understand the emotions, the adrenaline, how much you want it, how hard it is. ... Never take it for granted and understand this is what it's all about, and then for us to have another opportunity to get four more wins and play for a trophy, that's special."

For Thompson, it means so much given he returned in January from more than 2 1/2 years spent recovering from surgeries on his left knee and right Achilles tendon.

Golden State grabbed 70 rebounds — 22 by Looney after Curry and Green pushed for him to be a starter again — on the way to eliminating the Memphis Grizzlies 110-96 on Friday night and now advances to face either the Suns or Mavericks in a best-of-seven battle for the West. Game 7 of that series is Sunday in Phoenix to determine who's next for the Warriors.

Thompson scored 30 points with eight 3-pointers in adding another Game Six masterpiece to his long list of them.

"I have no idea. I have no clue," he said, "I love the moments. I love the pressure. I love playing basketball at the highest level."

Fresh faces like Andrew Wiggins and Jordan Poole are playing huge roles during this postseason run. Golden State suddenly also has a raucous home crowd at Chase Center, where the Warriors are 6-0 so far these playoffs.

And it feels a little like old Oracle Arena these days.

"I think these fans knew what we were up against," Green said. "We've all talked about the home-court advantage and how this isn't Oracle and you have to reestablish that home court, and I think we are doing a good job of it. But our fans were absolutely incredible tonight. It took everything we had to win that game, including the fan support and the noise that was in the arena." 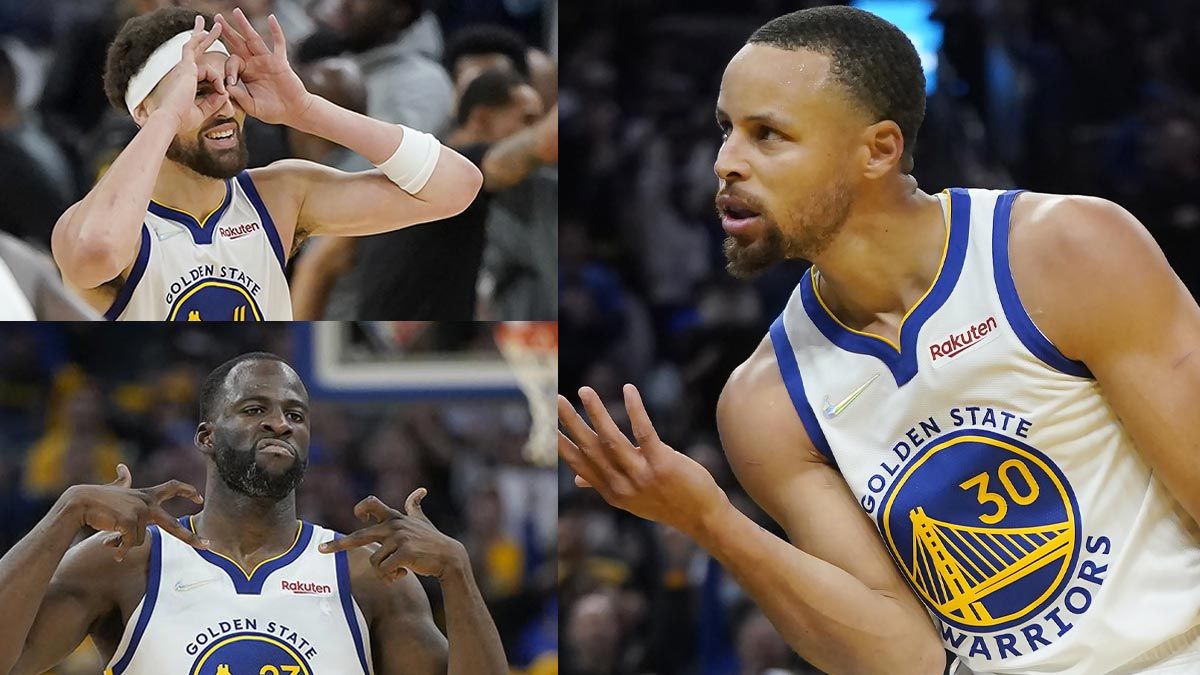 The Warriors look to make it back to the top.

This time, the Splash Brothers Curry and Thompson could let loose on their own floor, as their own fans chanted "Whoop that trick."

They loved every second of that. Golden State is going on, the Grizzlies are going home to Memphis for good.

The Warriors have certainly endured their share of drama and unforeseen stress to get this far.

Golden State contended with two-time reigning MVP Nikola Jokic over a five-game first-round series with the Nuggets, then got past Ja Morant and Memphis in a series full of back-and-forth chatter between the rivals. The Grizzlies eliminated the Warriors in a play-in game last season.

First, Gary Payton II went down for the rest of the postseason with a fractured left elbow on a hard foul by Dillon Brooks that led to the Memphis star's one-game suspension for the Flagrant 2 committed when he pounded Payton over the head as he drove for a layup in Game Two.

Morant got hurt in Game Three and accused Poole of re-injuring his troublesome right knee by pulling on it as they fought for a loose ball.

Coach Steve Kerr caught COVID-19 and sat out Games 4, 5 and 6 with Mike Brown the acting head coach of two teams at once given he had just been named the new Sacramento Kings' choice last Sunday.

"What a heck of a series," Brown said.

While Kerr's return date remained uncertain, Brown has guided the Warriors to a 13-1 mark filling in during playoffs. That includes an 11-0 during their 2017 championship run with Kerr sidelined then dealing with debilitating symptoms that were a complication from back surgery two years earlier.

"Mike B. is one of a kind. He's a player's coach. He's a great leader. He loves the game," Thompson said. "We are going to miss him next year obviously. But we will welcome back Steve with open arms. He's our leader."

Green was joined on the postgame podium with son DJ as the do-everything forward shared a story of watching the playoffs from Cabo San Lucas at this time last year, acknowledging, "It feels good to be back."