MIAMI — It was Kids Day in Miami, so it made sense that the youngest Heat starter would lead the way.

And the oldest member of the Heat rotation came up big, too.

Tyler Herro scored a game-high 26 points, Kyle Lowry had nine of his 17 in the final 3:03 — with the game on the line — and Miami rallied to beat the New Orleans Pelicans 100-96 on Sunday (Monday, Manila time).

"When we get stops and run in transition, we're a hard team to beat," Heat center Bam Adebayo said.

Adebayo and Jimmy Butler each scored 18 for Miami, which trailed by 16 in the first half.

Trey Murphy III had 17 for New Orleans, which got 14 points and 16 rebounds from Jonas Valanciunas. CJ McCollum scored 13 and Larry Nance Jr. added 12 for for the Pelicans.

New Orleans' 25th turnover came on a five-second violation with 15.1 seconds left, with the Heat up by two. The Pelicans argued that Dyson Daniels was calling for a time-out before the violation, to no avail.

New Orleans wound up winning a jump ball shortly after the violation to regain possession, and McCollum got a good look at a 3-pointer for the lead with 7.6 seconds left. It rimmed out and Victor Oladipo put the game away for Miami with two free throws.

"It was taxing." Heat coach Erik Spoelstra said. "It feels like mistake after mistake, but that's also not giving them credit. They are extremely good at what they do." 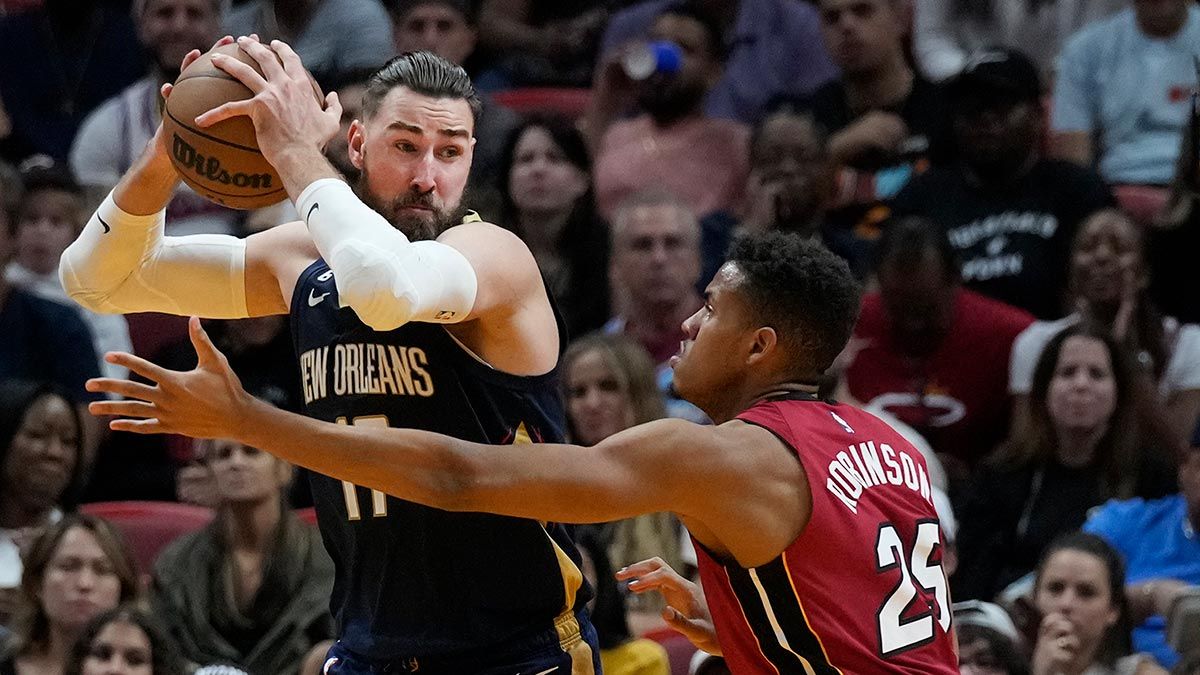 The Heat had eight turnovers turned into 15 points in the first quarter alone, the last three coming when Devonte' Graham intercepted a pass at midcourt and swished a 45-footer. Graham then opened the second quarter with a more conventional 3, giving him six points in a span of 22 seconds and helping New Orleans take a big lead early.

The Pelicans led by 16 points on two occasions in the first half, the last coming when Murphy had a dunk with 3:52 left. That made it 47-31, and that was still the score 2 minutes later when Herro made a 3 to begin what was a 10-0 run to end the half by the Heat.

That cut the deficit to six at halftime, and it stayed a single-digit game the rest of the way.

"I'm proud of our guys, the fight that they had tonight," Pelicans coach Willie Green said. "Guys competed. They played at a high level, executed at a high level at both ends of the floor. We came up short and we just have to take care of the basketball."

Pelicans: Brandon Ingram (toe) missed his 28th consecutive game, but played 5-on-5 on Saturday and is "progressing," Green said. ... Zion Williamson is in his fourth season, and still hasn't played before fans in Miami. He has missed six of the eight Heat-Pelicans games since he entered the league, and his only time playing in Miami was Christmas 2020, when the building was empty because of the pandemic.

Heat: Some of the FTX signage is gone from the building, which is being called Miami-Dade Arena for now. The logo of the collapsed cryptocurrency exchange has been removed from the playing floor. ... Dewayne Dedmon did not play for the fifth consecutive game, not including the one he missed while suspended for an Jan. 10 incident against Oklahoma City. ... The Kids Day game involves having children, some whose parents are Heat broadcasters, involved in the telecast.

Green had a windmill dunk during the team's practice in Miami on Saturday, the video captured and shared by Daniel Bove — New Orleans' Director of Sports Science and Performance. "You get in this humidity and it warms your ligaments up a bit," Green said. "I don't know if I could do the same thing in Cleveland or Detroit."

The game was the 35th for Miami decided by eight points or less this season. The Heat are now 19-16 in such games. "The Miami Heat fanbase, they get their money's worth," Spoelstra said.