MIAMI — Tyler Herro had spent the last few days dealing with an upper-respiratory bug that disrupted his routine. So he arrived at Miami's arena early Monday morning (Tuesday, Manila time), 10 hours before gametime, to get some shots up and restore his rhythm.

And the Heat struck first against the shorthanded Philadelphia 76ers.

Herro scored 25 points — the second-most he'd ever had in a playoff game — while Bam Adebayo finished with 24 points and 12 rebounds, and the top-seeded Heat ran away in the second half to beat the fourth-seeded 76ers, 106-92, in Game One of their Eastern Conference semifinal matchup.

Herro was 4 for 6 from 3-point range; everyone else in the game shot a combined 11 for 64 from deep.

The 76ers were without Joel Embiid, the MVP finalist who isn't even in Miami while recovering from an orbital fracture and concussion — injuries suffered in Philadelphia's first-round-clinching win at Toronto. He's not expected to play in Game Two.

And as would be expected, he was missed. Except by Adebayo, who barely missed anything. He was 8 for 10 from the floor, 8 for 8 from the line.

"I feel like I was just making plays," Adebayo said.

Jimmy Butler added 15 points for the top-seeded Heat, who got 10 from Gabe Vincent and P.J. Tucker.

Tobias Harris scored 27 points for Philadelphia, which got 19 from Tyrese Maxey and 16 points, nine rebounds and five assists from James Harden.

Game Two is Wednesday in Miami.

"I didn't like how we moved the ball," 76ers coach Doc Rivers said. "I thought we passed late tonight. I thought the physicality affected us tonight and that had an impact. There were too many times, we'd take the extra dribble and by the time we passed it they got there."

Miami came out as aggressive as could be, putting Tucker on Harden and having him guard him the entire 94 feet of the floor in a similar approach to what the Heat utilized against Atlanta's Trae Young in the first round series.

It worked — for a while. Miami led by as many as 12 in the opening quarter, then a 10-2 run fueled by eight points from Herro gave the Heat a 13-point edge at 37-24 to mark their biggest of the half. The margin was still 46-36 midway through the second after another Herro basket.

The rest of the half was all Philly. And that was the 76ers' takeaway from the night.

Miami went 1 for 9 from the field over the final 6 minutes of the half, with four turnovers in there as well, and Philadelphia went on a 15-4 spurt. Harden's shot in the lane with 28 seconds left put the 76ers up 51-50, their first lead of the night and the score that they took into the locker room.

The 76ers scored the first four points of the second half, going up by five. That was as good as it got for the 76ers.

"I liked how we fought back," Rivers said. "I liked how we came out at the beginning of the third quarter ... and then I didn't like the rest of the game from that point on."

Adebayo took a bullet pass from Tucker for a dunk that put Miami up 62-61, and that would be the final lead change of the night. It was the start of a 10-0 run that built a cushion, and then a 13-2 run early in the fourth decided matters and pushed the Heat edge out to 98-77.

"It's the playoffs," Adebayo said. "First to four." 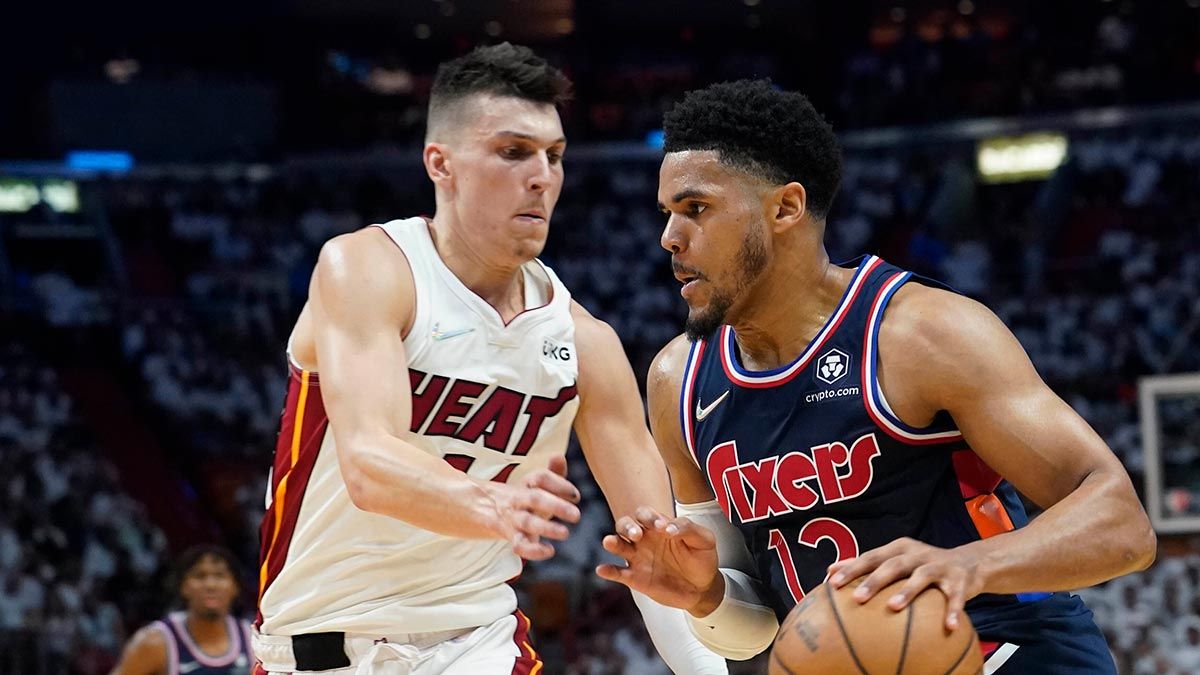 76ers: Philadelphia fell to 6-9 without Embiid this season. ... DeAndre Jordan started in place of Embiid and had four points and two rebounds in 17 minutes. ... Georges Niang was 0 for 7, all those shots from 3-point range.

Heat: Kyle Lowry (hamstring) missed his third consecutive game. ... Backup center Dewayne Dedmon picked up three fouls in a 23-second span of the first quarter. He then had two more in a 1:46 span of the third, giving him five fouls in 4:14 of playing time.

Heat guard Duncan Robinson, who led Miami in games played for a third consecutive regular season, didn't appear in Game 1. It's the first time since April 2019 that he dressed but didn't play, ending a streak of 256 games including playoffs. He missed three games this season while on Miami's inactive list.

Game Two is Wednesday in Miami.