Carmelo Anthony added 24 points off the bench, including 16 in the fourth quarter, to help Portland win for the fourth time in five games.

The Eastern Conference-leading Sixers had won six of seven, with the only defeat during that span coming a week ago to the Trail Blazers, 121-105. It was just the second loss at home for the Sixers.

After a back-and-forth game, the 76ers held the edge going into the final period but Anthony hit three consecutive 3-pointers to give the Blazers a 102-97 lead with 8:28 left.

Anthony added a pair of jumpers that made it 108-101. The Sixers came back to narrow the gap to 108-107 on Seth Curry's pull-up jumper and Simmons' layup. 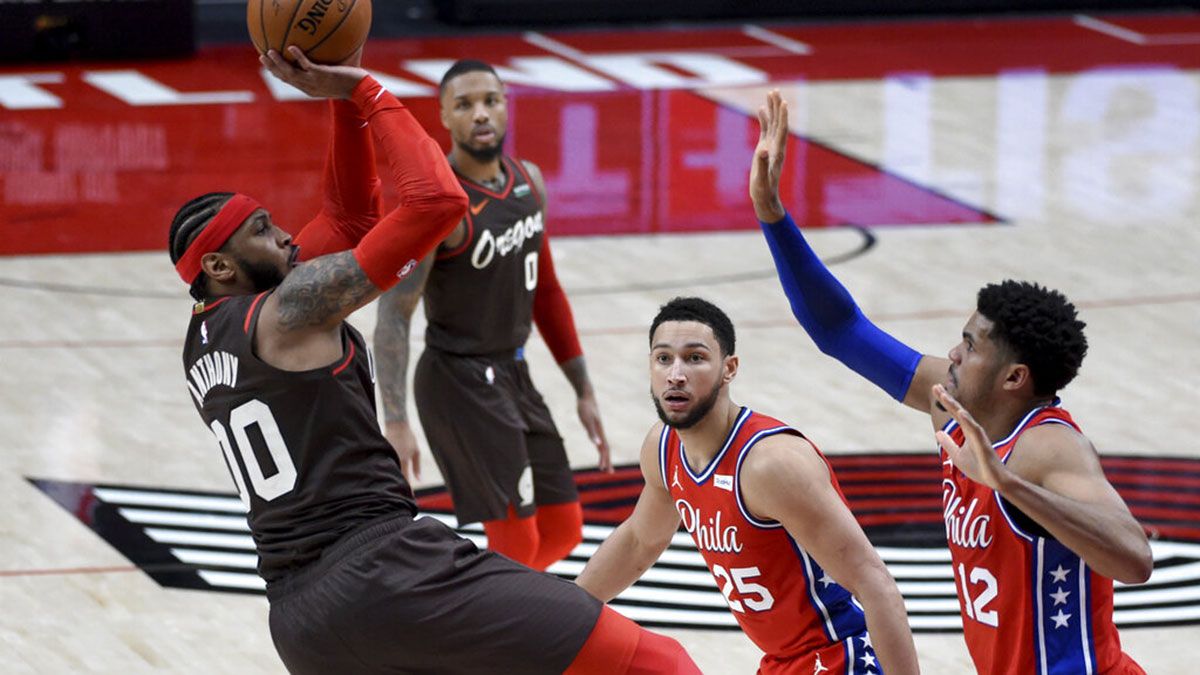 Carmelo Anthony rises for a fallaway jumper over Tobias Harris.

Tobias Harris' free throws knotted the game at 109 before Gary Trent Jr.'s 3-pointer put the Blazers back in front. Lillard added a basket to make it 114-109 with 1:15 left.

Embiid's pull-up closed the margin, then Curry's 3-pointer tied it at 114 with 22.1 seconds left. Tripped by Harris, Anthony made a pair of free throws with 3.1 seconds remaining. After a timeout, Robert Covington got a deflection and steal on the inbounds play and Lillard made free throws to close it out.

Embiid came in averaging 29.1 points per game, good for fourth in the NBA. He averaged 34.1 points and 10.1 rebounds over the last nine heading into Thursday's game.

Lillard was third in the league, averaging 29.4 points a game with 13 of 30 or more points this season.

The Blazers jumped out to a 20-13 lead, hitting six 3-pointers. But the Sixers tied the game at 28 on Simmons' short jumper, and pulled in front on Embiid's dunk.

Portland regained the lead for a 37-36 edge at the end of the opening quarter. Lillard led the way for the Blazers with 19 points, a season high for a quarter this season.

Anfernee Simons' floater gave the Blazers a 58-50 advantage with just under five minute left before halftime. Blazers center Enes Kanter had to leave the game late in the half after he got knocked in the head by a teammate and was bleeding heavily. He returned in the second half.

Embiid's dunk capped a 9-0 run that put the Sixers in front 59-58. His bank shot put Philadelphia up 63-60 at the break and he finished the half with 23 points.

The teams wrestled the rest of the way. Danny Green's 3-pointer gave Philadelphia a 75-69 lead, but the Blazers were able to stay close heading into the final quarter.

76ers: Were coming off a 119-111 victory over Sacramento to starts a four-game road swing. ... Philadelphia was without Shake Milton because of a left ankle sprain. He was hurt late in the game against the Kings.

Trail Blazers: It was the first of a back-to-back for Portland. ... The Blazers wore their City Edition jerseys, which pay homage to Oregon's Native American communities. ... The Blazers were without rookie CJ Elleby because of an illness. CJ McCollum and Jusuf Nurkic continue to nurse injuries.

The 76ers visit the Phoenix Suns on Saturday.

The Trail Blazers host the Cleveland Cavaliers on Friday.
___