ATLANTA — Trae Young hit a floater in the lane with 4.4 seconds left and the Atlanta Hawks overcame a 16-point deficit in the second half to beat top-seeded Miami, 111-110, on Friday night (Saturday, Manila time), cutting the Heat's series lead to 2-1.

Jimmy Butler missed a jumper with 12.6 second left that could've given the Heat a three-point cushion. He missed again on an off-balance 3 at the buzzer with De'Andre Hunter in his face to give the Hawks a burst of hope in the best-of-seven series.

P.J. Tucker led a 21-0 run in the third quarter that pushed the Heat to an 84-68 lead and seemingly on cruise control to a 3-0 lead. But Young and the Hawks would not let them get away.

Young finished with 24 points despite another stout defensive effort by the Heat. Bogdan Bogdanovic added 18, Hunter 17 and three others scored in double figures to take some of the pressure off the star guard.

Coming off a 45-point effort in Game 3, Butler was held to 20 in this one and missed a golden chance to give Miami a stranglehold on the series.

Tyler Herro led the Heat with 24 points, and Max Strus also had 20.

The Hawks led by 11 in the first half and were still up 68-63 when Hunter hit a 3-pointer with just under eight minutes remaining in the third.

That's when Miami suddenly took control of a game that was delayed about 45 minutes after a suspicious package was found outside State Farm Arena before the game.

The Heat turned up their stifling defense, knocked down shots and silenced a sellout crowd that was used to seeing the Hawks win at home.

Tucker scored eight points in the six-minutes spree, but his best work came at the other end on Young.

Leaning on him so much that Young shoved him away in frustration on an inbounds play, the 36-year-old Tucker used every trick in the book to stifle just the second player in NBA history to lead the league in total points and assists.

Even though Young hit only 2 of 7 shots in the first half, the Hawks led at the break for the first time in the series.

Danilo Gallinari had 11 points, five Atlanta players made 3s and the Hawks were up 61-54 heading to the locker room. 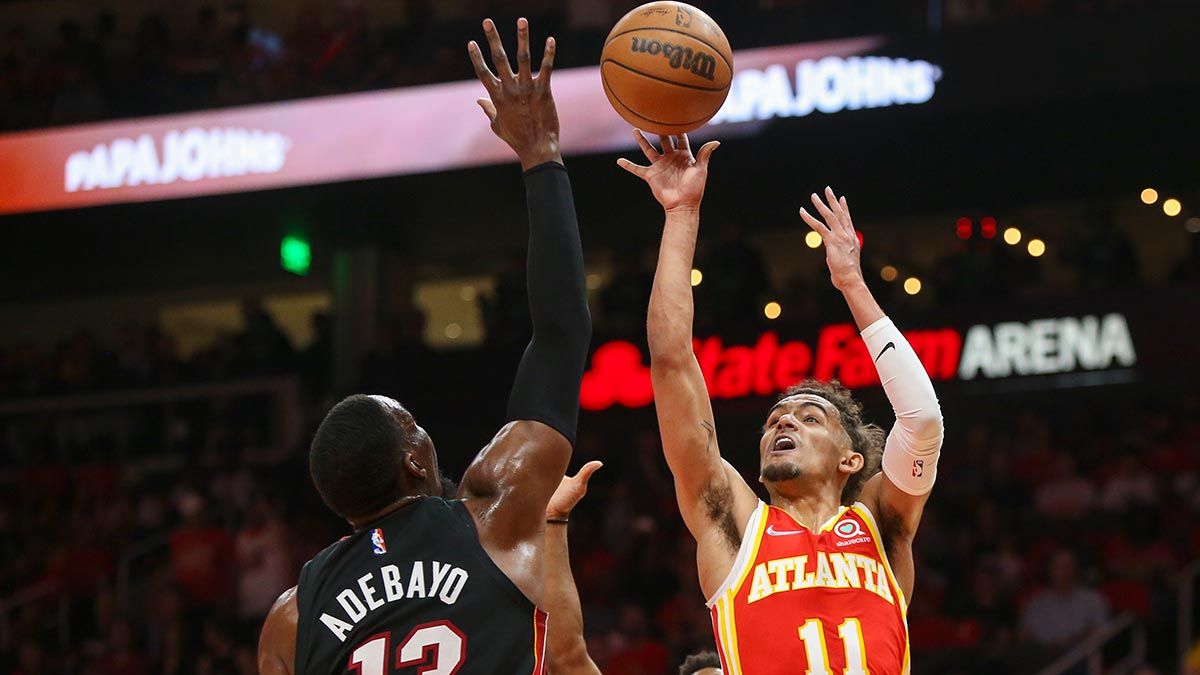 Tipoff was delayed after the suspicious package was found outside Gate 2 of the arena, near a stairwell that provides access to a MARTA subway station.

Three gates were closed, preventing fans from entering while police, K-9 units and arena security cleared the area and investigated the package.

A bomb squad safely removed the package after it was found not to be explosive, clearing the way for the entrances to be opened.

Even with the delay, many fans were still bogged down in long lines outside the arena when the game began. But the place was hopping at the end of the night

Heat: Tucker had 11 points. ... Butler nearly had a triple-double with 10 rebounds and eight assists. ... Bam Adebayo had 13 points and 11 rebounds.

Hawks: John Collins started again at center in place of injured Clint Capela, who has yet to play in the the series, but wasn't much of a factor. Struggling again with an injured finger, Collins managed just six points and five rebounds. .

The Hawks have built quite a home-court advantage since mid-January, winning 21 of their last 24 games in the A-T-L. They'll go for their seventh straight home win in Game Four.