Butler scored 13 of his 36 points in a dominant second quarter and the Heat beat the Hawks, 110-86, while again shutting down Young on Sunday night (Monday, Manila time) to take a 3-1 series lead.

Miami can wrap up the first-round series in Game Five on Tuesday night in Miami.

Miami ended Atlanta's six-game home winning streak despite playing without point guard Kyle Lowry, who was held out with a left hamstring strain. Butler said some of his motivation to take the scoring lead was the need to fill the void left by Lowry's injury.

"Everybody is in my ear about staying aggressing, taking more shots," Butler said. "Tonight was a good one. We've got another one we've got to get."

Butler overcame a slow start. He made only 1 of 7 shots before hitting his final five shots of the first half to lead the turnaround.

Miami outscored Atlanta 30-15 in the second period, holding the Hawks to a season scoring low for the period.

Butler had 10 rebounds, four assists and blocked a shot.

Young scored only nine points with five assists and five turnovers as he was shut down by Miami's defense for the second time in four games. Young was held to eight points in Miami's 115-91 Game One win.

"They're doing a great job of showing help and not letting me get to the paint," Young said. "You've got to give them credit. We've got to do a better job of figuring out how to get open looks so I can create for my teammates and myself, too."

Miami outscored Atlanta 47-26 in the paint.

"They basically kept us on the perimeter," said Hawks coach Nate McMillan.

Gabe Vincent had 11 points while sinking three 3-pointers in his fill-in start for Lowry, who strained his hamstring in the third quarter Friday night in a 111-110 loss to the Hawks. Lowry's status for Game 5 is not known.

A key in the Heat's surge came on a Butler steal from Collins, who fouled as Butler scored and then made the free throw. It was Collins' third foul.

Butler drove through the Atlanta defense for two late baskets in the half after Collins left the game with four fouls with 1:54 remaining. Collins, who scored 11 points, finished with five fouls.

Miami led 98-74 when McMillan pulled out Young and his other starters. 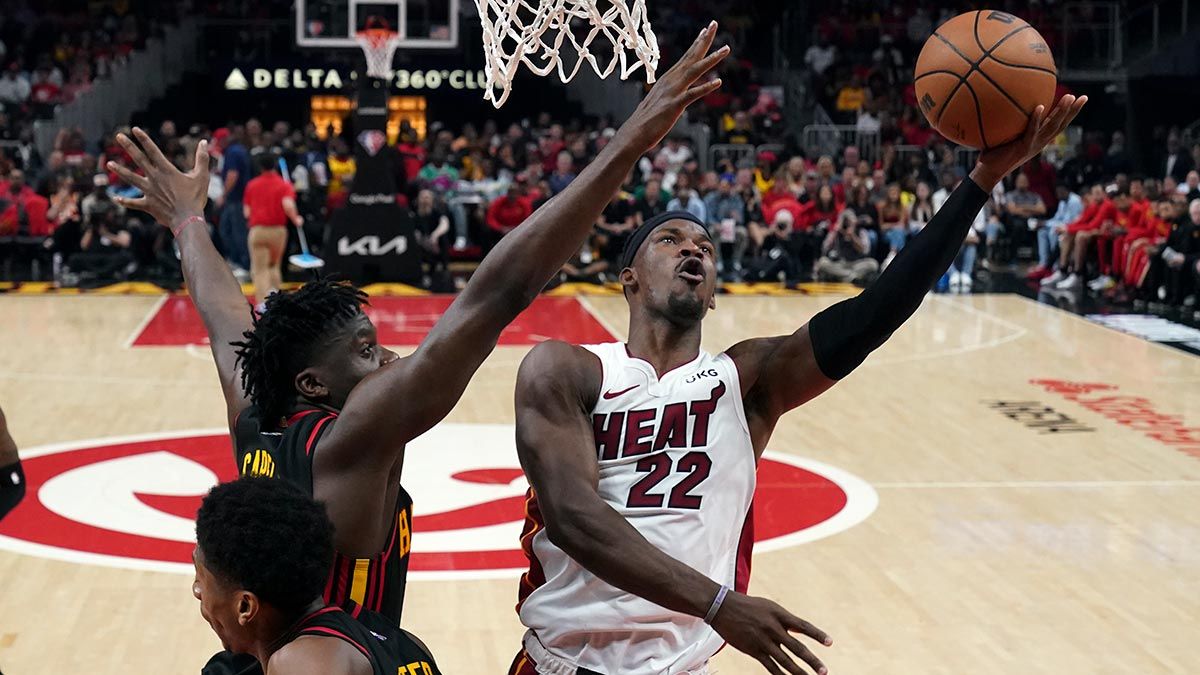 Jimmy Butler and the Heat are a win away from the conference semifinals.

Hawks: C Clint Capela started after missing the first three games of the series with a right knee hyperextension. Capela had five rebounds and his only two points in his first 8 minutes. He finished with seven rebounds. ... The Hawks made only 5 of 11 free throws in the first half and 11 of 20 overall.

Young went to the floor in pain midway through the opening period after Vincent stepped on his left foot. Young winced and was slow to rise to his feet but remained in the game.

"It's a little sore," Young said after the game. "I definitely rolled it a little bit."

Victor Oladipo played 23 minutes, scoring six points with eight rebounds and four assists in his first appearance of the playoff series for Miami.

"I really admire him for his fortitude," said Miami coach Erik Spoelstra.

It was Oladipo's first action since scoring 40 points with 10 rebounds and seven assists on April 10 against Orlando in the Heat's final regular season game.

"I was ready regardless," Oladipo said when asked if he was told before the game he would see playing time. "Nobody has to tell me anything."

Miami will try to extend its three-game home winning streak over Atlanta, including the first two games of the series, in Game 5. Overall, the Heat are 5-2 at home against the Hawks this season.