MINNEAPOLIS — Karl-Anthony Towns roared back from two rough games with a career playoff-best 33 points and 14 rebounds, helping the Minnesota Timberwolves move past their Game Three collapse and pull out a 119-118 victory over the Memphis Grizzlies on Saturday night (Sunday, Manila time) to even the first-round series at 2-2.

Anthony Edwards scored 24 points and backup Jordan McLaughlin went 4 for 4 from 3-point range to pitch in 16 points as the Timberwolves relentlessly attacked the basket and went 31 for 40 from the foul line.

The series shifts back to Memphis for Game Five on Tuesday night.

Desmond Bane, who hit his eighth 3-pointer at the buzzer to finish with 34 points, and Dillon Brooks with 24 points kept the Grizzlies going on another quiet night for star point guard Ja Morant.

Jaren Jackson Jr. fouled out with seven points, and 25 of the Grizzlies' 33 fouls were called their starters.

Towns, who took four shots and had just eight points in Game Three, hit 14 of 17 free throws and was the catalyst down the stretch with 13 points in the fourth quarter.

Patrick Beverley missed two free throws with 43 seconds left. With the Wolves leading 115-110, Morant answered with a layup and Edwards missed a pull-up 3. But Tyus Jones had his 3-pointer fall short with 10.5 seconds to go, and Edwards grabbed the rebound. He sank both free throws as the crowd chanted, "Wolves in six! Wolves in six!"

McLaughlin's first 3 put Minnesota in front in the second quarter to start a 17-1 run that maxed out with a 50-35 lead — the largest of the night that quickly got whittled by the Grizzles back down to single digits.

The Wolves might have been better off playing a tighter game this time, after their pair of 25-point advantages in Game 3 went for naught.

Game 3 was an anomaly, considering the Timberwolves were just the ninth NBA team in 389 situations over the past 25 postseasons to lead by 25-plus points and lose the game, according to ESPN.

And while it fits right into the Minnesota sports scene that has been filled for decades with such disappointment, the crowd didn't quit on creating a raucous advantage Saturday.

Troy Hudson and Wally Szczerbiak, standouts on the last Timberwolves team that captivated the town in 2004, were courtside with an endless supply of high-fives for fans seated nearby.

When Towns swished a 3 from the top of the key on the first possession, a jet-like roar followed.

Towns knew how critical the game was and came out with a ferocity suggesting he knew precisely how much criticism he'd been dealt for his Game 3 dud. When he hit his opening 3, he looked down at his hands and yelled to no one in particular about the importance of passing him the ball. 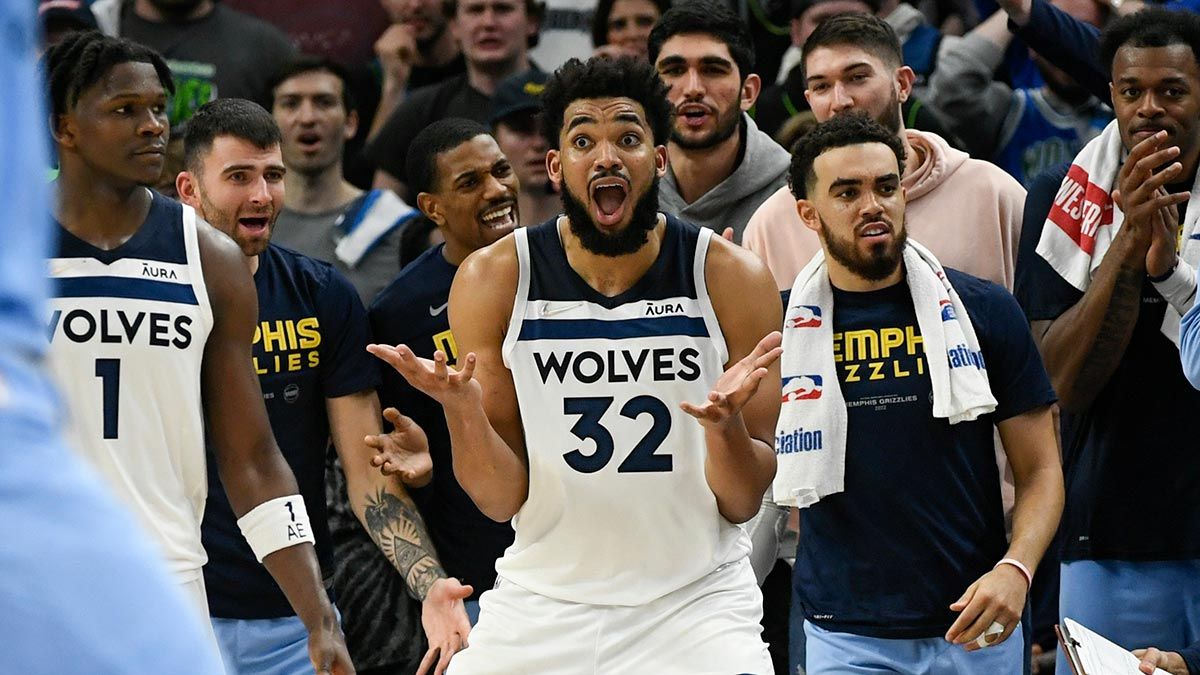 Bodies crashed to the floor on almost every possession in what was perhaps the most physical game of the series to date. Morant, who has been playing through nagging leg injuries, took several hard landings after layup attempts.

Grizzlies backup Ziaire Williams sustained an eye injury in the second quarter, when Morant drew a flagrant foul on D'Angelo Russell as he drove to the hoop and caught a hand to the face.

Edwards left for a bit in the first quarter with an injury to his right knee unrelated to any contact, but after having trouble walking to the locker room for further examination he returned less than 3 minutes later without any trouble.

Two more animal rights protesters attempted to interrupt the game in the third quarter. One woman leaped over the courtside seats of Timberwolves owner Glen Taylor and his wife, Becky, before being tackled by security and carried away. Her companion remained behind the Taylors and next to the second row of Timberwolves assistant coaches, who helped security wrestle her out.

The group has been protesting the way that a chicken farm that's part of Taylor's enterprises has allegedly handled an avian flu outbreak. The highly contagious virus has killed roughly 28 million poultry.

Grizzlies: Xavier Tillman started at center, the fourth player in the series for the Grizzlies in an opening-half lineup to join Jaren Jackson Jr. in the frontcourt as coach Taylor Jenkins continued to employ a variety of methods for trying to take Towns out of his element. Brandon Clarke, Kyle Anderson and Steven Adams have all taken turns. ... Brooks, who was listed as questionable to play with a sore left foot, shot 10 for 20.