MINNEAPOLIS — Karl-Anthony Towns had 28 points and 10 rebounds and the Minnesota Timberwolves blew out the depleted Los Angeles Lakers for a second time this season, 110-92, on Friday night (Saturday, Manila time).

Malik Beasley and D'Angelo Russell each had 17 points and Jarred Vanderbilt grabbed a career-high 16 rebounds to help the Timberwolves win their third straight game. They played for the first time without star Anthony Edwards, who was placed in the NBA's health and safety protocols in the afternoon.

LeBron James had a quiet 18 points and 10 rebounds for the Lakers, who were hit even harder by COVID-19 with six players in the protocols. Isaiah Thomas made his season debut with 19 points, Russell Westbrook had 14 points and Kent Bazemore matched his season high with 11 points. Anthony Davis departed the game twice for different injuries.

Davis hurt his right ankle late in the first quarter, returned in the second quarter and then bruised his left knee in the third quarter. He didn't return from that. Davis, who missed two games last week with left knee soreness, finished with nine points and one rebound in 20 minutes.

It didn't matter who was defending Towns, who had 32 points at Denver on Wednesday night. He had 23 points on 9-for-14 shooting in the first half of this one, while every other player who saw the court for either team combined to go 25 for 77 from the floor.

On a nationally televised game that didn't start until 9:15 p.m., the teams combined to miss 25 of 26 attempts from 3-point range in the first quarter. Towns provided the energy to make up for the early misses. Every time he'd power his way to the hoop and get the ball to fall, Towns would flex his muscles and scream to himself in satisfaction.

The Timberwolves withstood every charge by the Lakers. They led 61-47 after Vanderbilt stole the ball for James and fed Beasley for a fast-break dunk, only to watch the visitors storm back with an 11-0 surge. The Timberwolves responded with an 11-0 run of their own, with Beasley as the fuel. 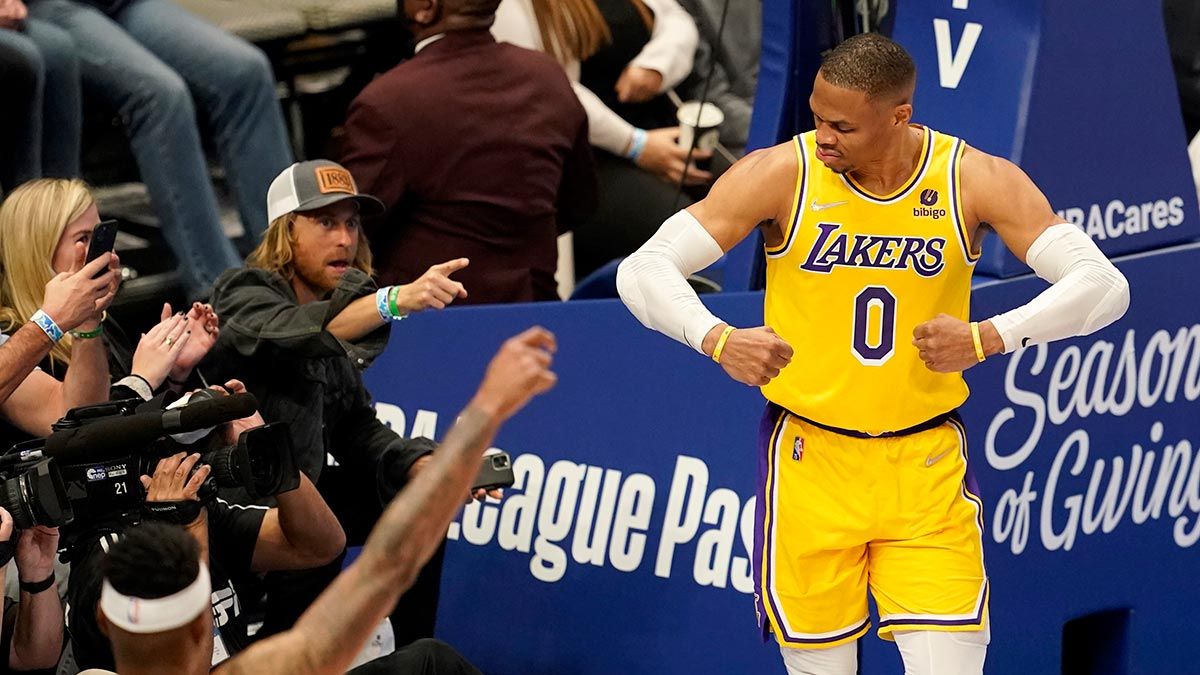 Russell Westbrook, cleared to play after getting through the NBA’s health and safety protocols, scores 14 on 4 of 7 shooting.

This was the first absence of Edwards' young career, after playing in 100 straight games.

Edwards had 38 points on 10-for-14 shooting from 3-point range at Denver on Wednesday and became the seventh player in NBA history with 2,000 points in 100 games at age 20 or younger. Two of the first six, James and Carmelo Anthony, are on the Lakers.

The bright side was they still had Westbrook after just a one-day hiatus. He played in the last game at Dallas on Wednesday and had to stay behind until being cleared to travel to Minnesota.

The Lakers even brought back Thomas on a 10-day contract for emergency depth, as the 5-foot-9 fan favorite marked the official start of his 11th season in the NBA. Thomas scored 42 points in a G League game Wednesday.

"You just rip up your game plan in terms of your substitution pattern and redo it," coach Frank Vogel said before tipoff.

Chaudee Brown Jr. made his NBA debut and played 15 minutes.

Lakers: Bazemore was scoreless in 15 minutes in the previous game and didn't even get in the game before that. ... Horton-Tucker, Howard and Monk each missed their second straight game.

Timberwolves: Taurean Prince joined Edwards in the health and safety protocols. Coach Chris Finch said both player were asymptomatic. ... Towns was presented with the NBA's monthly community service award for November prior to the game, in recognition of his support for homeless youth.

The Lakers are scheduled to play at Chicago on Sunday night. The Bulls, who had two games postponed this week because they had 10 players in the health and safety protocols, were cleared to resume practice on Saturday.