DALLAS — Kristaps Porzingis had 29 points and 11 rebounds, Tim Hardaway Jr. scored 13 of his 19 in the fourth quarter and the Dallas Mavericks rallied behind a small-ball lineup to beat the Denver Nuggets, 111-101, on Monday night (Tuesday, Manila time).

Dallas opened the fourth period on a 17-6 run that included 3-pointers by Hardaway, Dorian Finney-Smith and Reggie Bullock to go ahead 98-88 with six minutes left, its largest lead to that point.

With Porzingis and All-Star guard Luka Doncic on the bench, Mavericks coach Jason Kidd opened the quarter with a four-guard lineup plus the 6-foot-7 Finney-Smith against an opponent finishing a back-to-back with its smaller second unit on the floor.

"I think it was funky," Hardaway said. "We knew going into the fourth we wanted to get the pace going real high."

Doncic had 23 points and 11 assists and Jalen Brunson scored 17 off the bench for the Mavericks, who have won five of six.

"We felt that was a lineup that could get going, give us some energy, some physicality," Kidd said. "And that's what they brought."

Nikola Jokic scored a season-high 35 points and grabbed 16 rebounds for the Nuggets, who had their five-game winning streak snapped.

The Nuggets' largest lead was 13 early in the third period. Monte Morris scored 17 points, Aaron Gordon had 14 and Austin Rivers 12 for Denver.

The score was tied 44-all with six minutes left in the first half before the Nuggets closed on a 14-5 run. The 58-49 lead was their largest of the half. And as the teams walked off, Doncic was given a technical foul for complaining about a non-call on his drive seconds earlier.

Denver entered allowing 98 points per game, fewest in the NBA. After the Mavericks scored 35 in the first quarter and led by three, they were held to 14 points in the second quarter on 22.7% shooting from the floor.

Nuggets guard Will Barton, the team leader in minutes per game, missed his second consecutive game with lower back tightness.

It was the fourth time in 14 games this season that Denver has allowed 100 or more points. 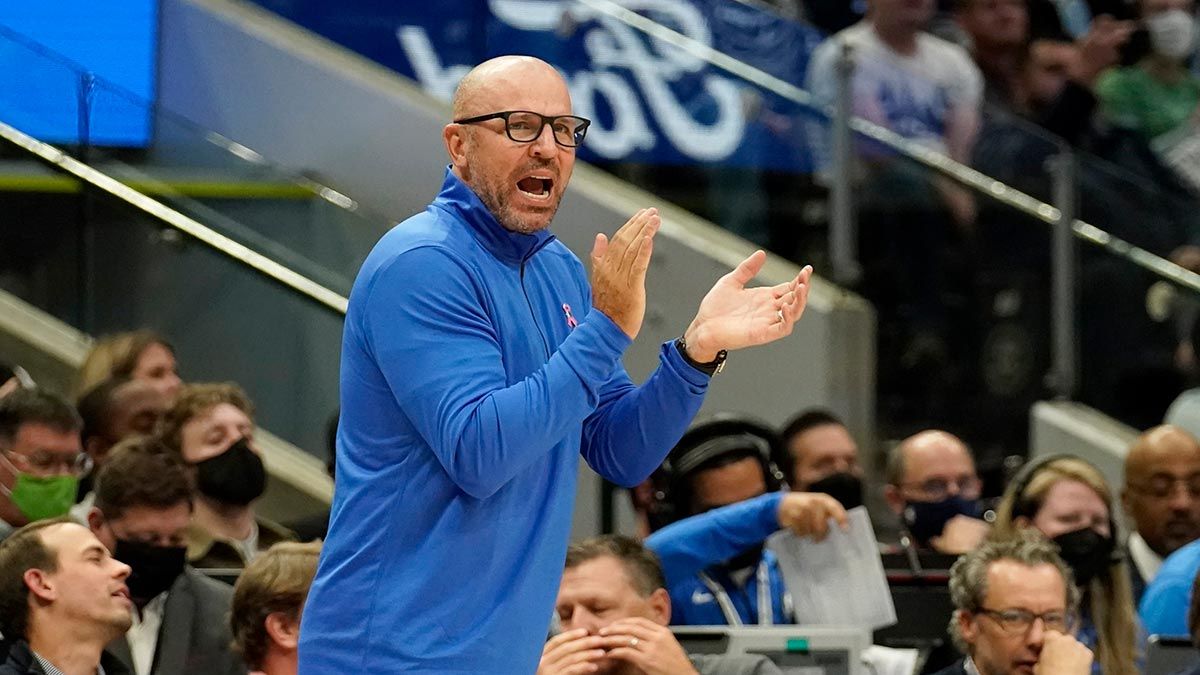 Jason Kidd and the Mavs score their second straight win.

Porzingis saw significant time at center in addition to his usual position at forward with Dwight Powell in the pivot. In five games since returning from a back issue that sidelined him for five games, Porzingis is averaging 23.2 points and 7.2 rebounds. He was 5 for 8 on 3-pointers.

"K.P. was great on both sides of the ball," Kidd said. "When you look at K.P. at the 5, we don't want to have him out there for 40 minutes for the journey of the season. That's just too many minutes."

Nuggets forward Michael Porter Jr. has been out since leaving the Nov. 8 game against Miami with lower back soreness, and there's no estimation for when he'll return.

"He obviously wants to play well really badly," Rivers said. "No one really knows what's going on with that. We just know his back has had some minor setbacks."

Mavericks: At the Phoenix Suns on Wednesday and Friday.