SAN ANTONIO — Shai Gilgeous-Alexander had 33 points and the Oklahoma City Thunder rallied in the second half to beat the San Antonio Spurs 107-102 on Thursday night (Friday, Manila time) and snap a two-game losing streak.

The Spurs had won three of five entering the game but couldn't sustain an early lead.

San Antonio took an 11-point lead at the half while playing their first game before a sizeable crowd of just over 1,000 fans. Any jolt the team received from those fans faded at halftime.

The Thunder outscored the Spurs 57-41 in the second half.

Gilgeous-Alexander scored 20 points in the second half, shooting 7 for 10 to rally Oklahoma City to just its fourth win in 10 games. 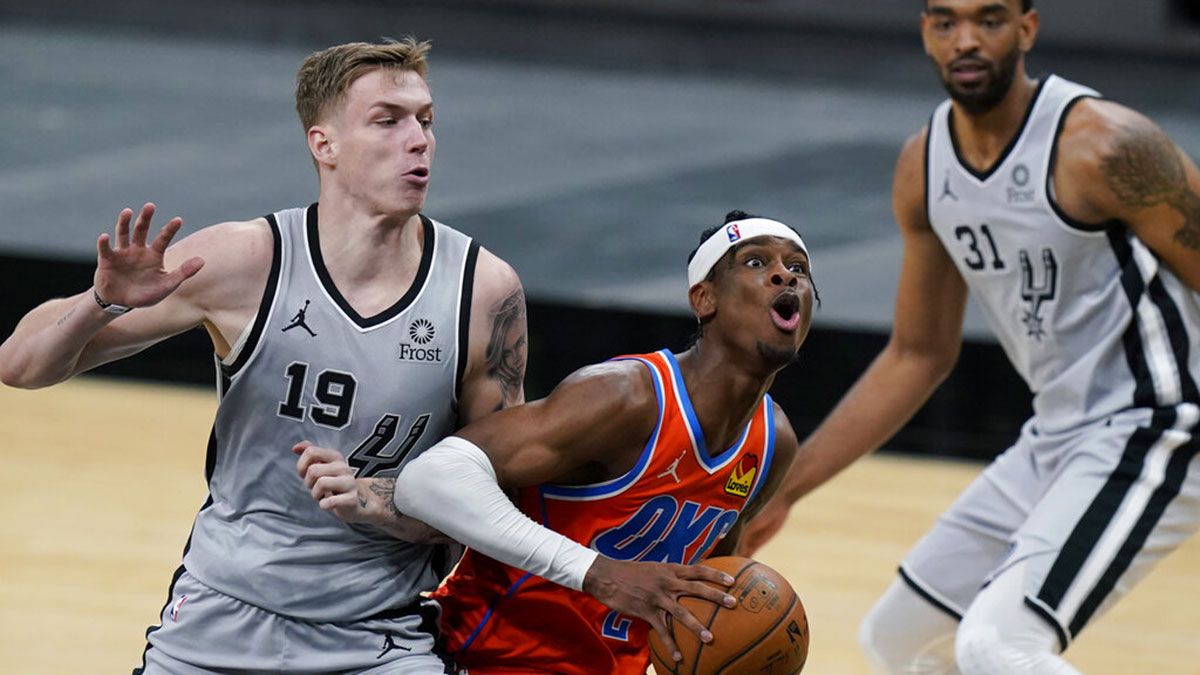 Shai Gilgeous-Alexander tries to get past Luka Samanic.

San Antonio had 19 turnovers, which led to 26 points.

The Spurs and Thunder were hobbled heading into the final game before the All-Star break for both teams.

San Antonio was without LaMarcus Aldridge, Rudy Gay, Derrick White and Devin Vassell. Gay, White and Vassell have not played since Feb. 14 due to the league's health and safety protocols involving those who have contracted or been in contact with COVID-19. Aldridge missed his second straight game with a stomach ailment.

Oklahoma City forward Al Horford sat out the second night of a back-to-back and three others were injured, including George Hill.

Thunder: Hill has not played since Jan. 24 after undergoing what Oklahoma City called a "minor procedure" on his right thumb. … Hamidou Diallo did not play due to a sore right groin and Josh Hall missed the game with a sore left knee.

Spurs: The Spurs hosted First Responders and city officials for their largest crowd of the season. After limiting attendance to family and friends of the team and staff, San Antonio will allow the public to return March 12 against Orlando. … DeRozan eclipsed 17,000 career points and Murray reached 2,000 points. … Patty Mills reached 1,023 3-pointers, surpassing J.R. Smith for sixth in league history for reserves. … Keldon Johnson was selected for the U.S. Rising Stars roster by the league's coaches. Johnson is the only player chosen that is not a lottery pick. The game will not be played this season due to the shortened All-Star Game activities implemented for COVID-19.

Spurs: At Dallas on Wednesday night.
___