PORTLAND, Oregon — No team in the NBA has a longer active streak of postseason appearances than the Portland Trail Blazers, who have gotten there in each of the last eight seasons.

That wasn't enough to save Terry Stotts, and Portland will have a new coach next season.

The Trail Blazers and Stotts parted ways on Friday (Saturday, Manila time), ending a nine-year run that saw the team good enough to get to the playoffs — but not good enough to get past the first round in four of the last five seasons.

"I have the utmost respect for Terry and what he has accomplished these past nine seasons," Blazers President Neil Olshey said. "This was a difficult decision on both a personal and professional level but it's in the best interest of the franchise to move in another direction.

"Terry will always hold a special place in the Trail Blazer family and the Portland community. We relied on the integrity, professionalism and consistency he brought to the job every day and we wish he and Jan nothing but the best."

It was being termed as a mutual decision. The move was made one day after Portland's season ended with a six-game, first-round ouster at the hands of the Denver Nuggets, a defeat that had Blazers guard Damian Lillard taking to social media after the game to indicate his frustration.

"Just like at the end of every year, we are all evaluated," Stotts said after the season-finale against Denver and as speculation about his status immediately started to grow. "We will see what happens."

It didn't take long to get an answer.

Stotts was the NBA's fourth longest-tenured coach in his current job behind only San Antonio's Gregg Popovich, Miami's Erik Spoelstra and Dallas' Rick Carlisle. He went 402-318 in his nine regular seasons in Portland, with the eight playoff berths, and led the team to the Western Conference finals in 2019 — where the Blazers were swept by Golden State.

Among the possible candidates that Portland may consider: Los Angeles Lakers assistant (and former Brooklyn and Milwaukee head coach) Jason Kidd, and ESPN analyst Jeff Van Gundy — whose last NBA coaching gig was with Houston in 2007.

"He should (be at) the top of everybody's list who has an opening in the NBA," Lakers coach Frank Vogel said of Kidd earlier Friday, hours before Stotts' fate became known.

The new coach, whoever it is, will certainly be lured by the chance to work with one of the game's dynamic scorers in Lillard.

But Lillard fueled speculation about his own future in Portland following the elimination loss to the Nuggets. He posted a photo of himself in street clothes at the Moda Center. The caption that he added quoted the late rapper and activist Nipsey Hussle.

Portland finished the regular season 42-30 and earned the sixth seed in the Western Conference.

Portland was riding momentum, having won 10 of its final 12 regular-season games. The Blazers were also healthy, with both big man Jusuf Nurkic and guard CJ McCollum back from extended absences because of injuries.

But once again, the playoff trip was brief.

Lillard averaged a league-best 34.3 points and 10.2 assists in the playoffs, after averaging 28.8 points and 7.5 assists during the regular season.

He had 55 points, including a playoff record 12 3-pointers and 10 assists in Game 5 against the Nuggets, but Portland still lost, 147-140 in double overtime.

"We've got to keep fighting, keep working and keep coming back to battle," he said. "Regardless of how it ended, we are always going to have our heads held high, have class. They won, congratulations to them, but it's back to the drawing board to us."

A four-time All-Star, Lillard just wrapped up his ninth NBA season. The closest he's come to a title was that quick trip to the West finals in 2019.

"We didn't win a championship, so obviously where we are now isn't good enough," he said. 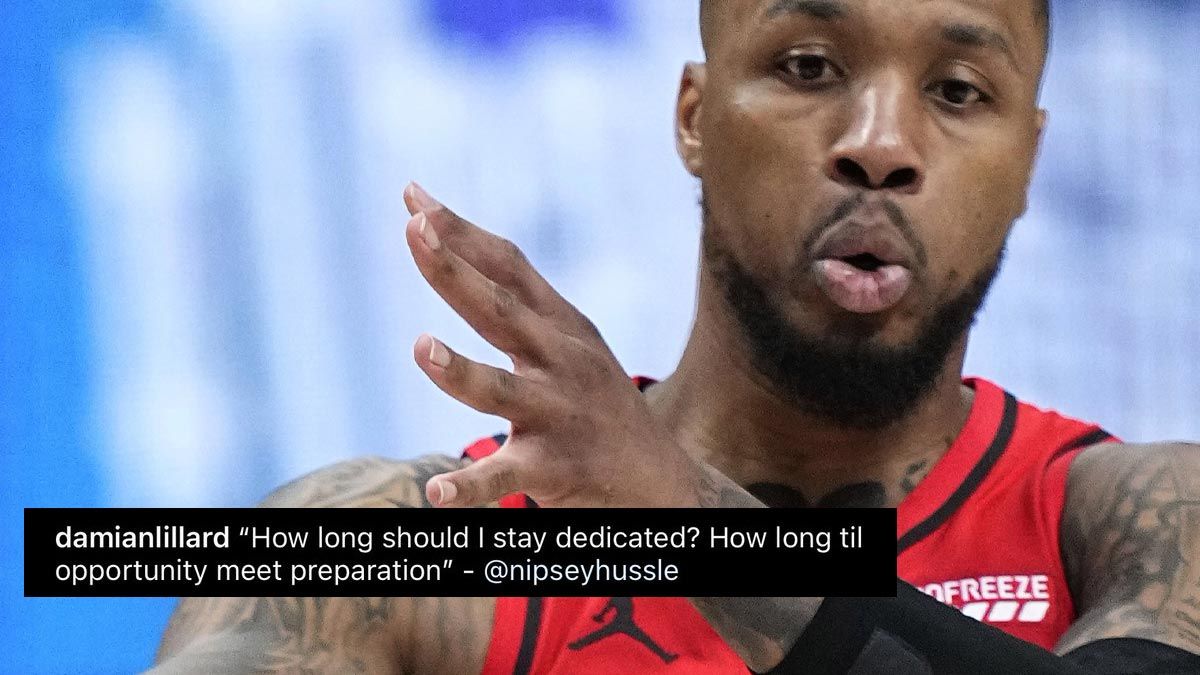 Nurkic, who averaged 11.5 points and nine rebounds but missed time with a fractured right wrist, has one year left on his contract — but only $4 million is guaranteed. He didn't sound committed to returning next season following the loss, explaining he would come back if it was the "right situation."

But when asked what the right situation would be, Nurkic replied: "I don't know. But it's not this."

McCollum, Lillard's backcourt teammate, averaged 21.3 points this season, his best since joining the league in 2013. But he missed games with a fractured foot.

Ten-time All-Star Carmelo Anthony, who filled a key role off the bench for Portland this season, will be an unrestricted free agent, along with Enes Kanter. Norman Powell has a player option for next season.

Stotts said he was proud of what Portland was able to accomplish, given the injuries and disruptions caused by the coronavirus.

"What we did with CJ and Nurk missing games, I was proud of that," Stotts said. "At the end of the season, to do what we did was pretty impressive."

In the end, it just wasn't impressive enough.