MILWAUKEE — Jayson Tatum scored 46 points, outdueling Giannis Antetokounmpo and making sure there wouldn't be another Milwaukee Bucks fourth-quarter comeback, and the Boston Celtics beat the defending champions, 108-95, on Friday night (Saturday, Manila time) to force a seventh game in their Eastern Conference semifinal.

The third straight victory for a road team sets up a winner-take-all game Sunday in Boston. The victor heads to Miami to begin an East finals matchup with the top-seeded Heat on Tuesday.

Boston showed its grit by bouncing back two nights after blowing a 14-point, fourth-quarter lead in a 110-107 Game 5 home loss. The Bucks tried to rally again after trailing by 14 points in the final period, but this time Tatum kept the Celtics on top and kept their season alive.

Antetokounmpo had 44 points, 20 rebounds and six assists. His 20 rebounds were one off his career high.

Jaylen Brown scored 22 and Marcus Smart had 21 for the Celtics, who capitalized on their superiority from 3-point range. The Celtics were 17 of 43 and the Bucks 7 of 27 from beyond the arc.

Antetokounmpo tried to lead the Bucks to a second straight improbable comeback.

Boston led 84-70 in the opening minute of the fourth quarter and was up 84-73 when officials ruled Grant Williams had drawn a charge for Antetokounmpo's fifth foul. But the Bucks challenged the call and it was overturned on replay, instead sending Antetokounmpo to the line with four fouls.

Antetokounmpo made both free throws to start an 8-0 run that got the Bucks back into the game. The Bucks trimmed the margin to 85-81 on Antetokounmpo's 3-pointer with 8:42 left.

Tatum wouldn't let the Bucks get any closer.

After that 8-0 Bucks spurt, Tatum scored the Celtics' next 11 points. That included a fadeaway jumper as the shot clock expired to get the lead back to six plus a couple of 3-pointers.

Boston maintained a double-digit edge the rest of the way. 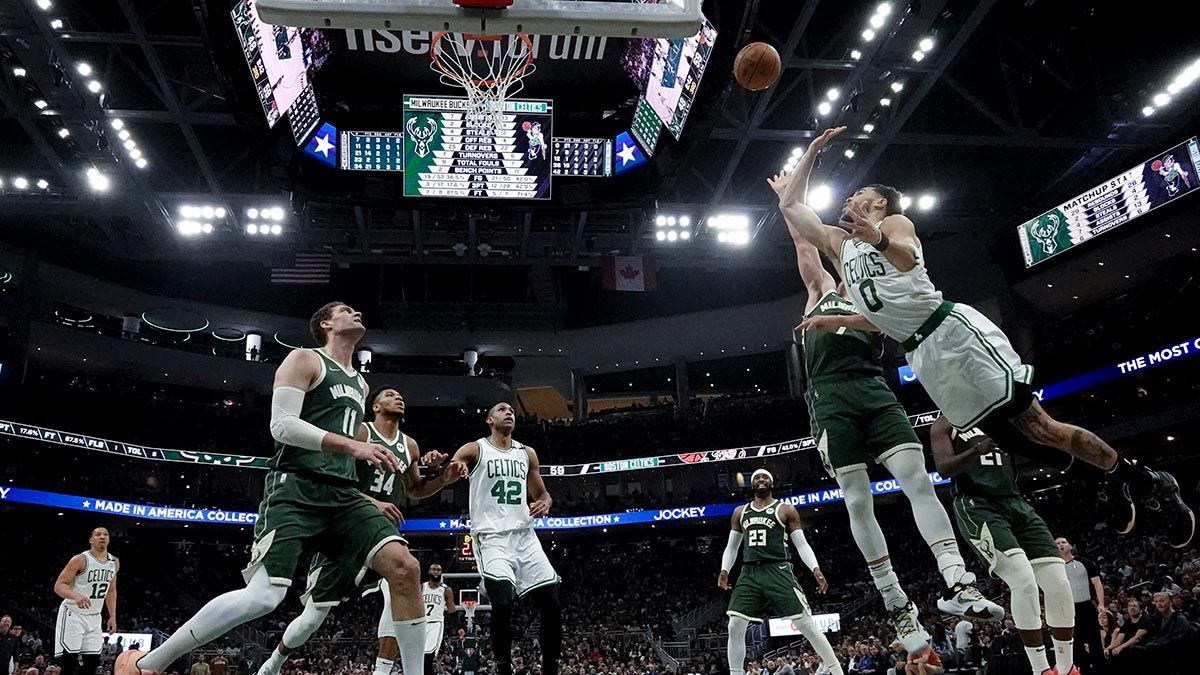 Jayson Tatum and the Celtics look to set up an East title showdown with the Heat.

The Celtics played without forward/center Robert Williams for a third straight game.

Celtics coach Ime Udoka said Williams suffered a bone bruise in his left knee while colliding with Antetokounmpo in Game 3.

Milwaukee was missing three-time All-Star forward Khris Middleton for a ninth consecutive game. Middleton sprained the medial collateral ligament in his left knee during Game 2 of the Bucks' first-round series with the Chicago Bulls.

Bucks: A moment of silence was held before the game to honor Hall of Famer Bob Lanier, who died Tuesday at the age of 73. Lanier played for the Bucks from 1980-84, and his No. 16 jersey hangs from the Fiserv Forum rafters. … An estimated 10,000 fans filled the Deer District outside Fiserv Forum.

Scott Foster, the scheduled crew chief for Game 6, couldn't officiate because of an illness unrelated to COVID-19. Eric Lewis took over as crew chief with Ben Taylor working as the referee and Tre Maddox as the umpire.