BLAKE Griffin had this season's highest-scoring game for all of about 24 hours before Stephen Curry bettered it — in just three quarters.

Then in Golden State's next game after Curry poured in 51 points in a rout of Washington, Kevin Durant scored 25 in the fourth quarter, the best total of his career, and finished with 41 in a victory at New York.

With the Warriors teammates' big nights and Griffin's 50-point outburst for Detroit coming in just a four-night span, it continued a torrid start for scorers that Curry said made it seem like "everybody's clicking at the same time."

But count Curry among those who isn't sure the offensive onslaughts being seen now are will still be seen in a few months.

"Those are just great players just making plays, having great nights. That's not any different than any other year," he said after Durant's big night.

Damian Lillard has already had a pair of 40-point nights and Kemba Walker is one point shy of doing the same. That comes after there were 13 50-point performances last season, with MVP and league scoring champion James Harden doing it four times, including a 60-point night.

The increased emphasis on the three-point shot and the league's focus on allowing freedom of movement on the perimeter have opened up the offenses. Players who aren't known as scorers can have big nights, and guys who were think they would have been unstoppable.

"I'd average easily 35-40 points a game. Easily ," two-time scoring champion Tracy McGrady said in a quote tweeted by the Orlando Magic. "I mean, I averaged 32 without even shooting that many 3s." 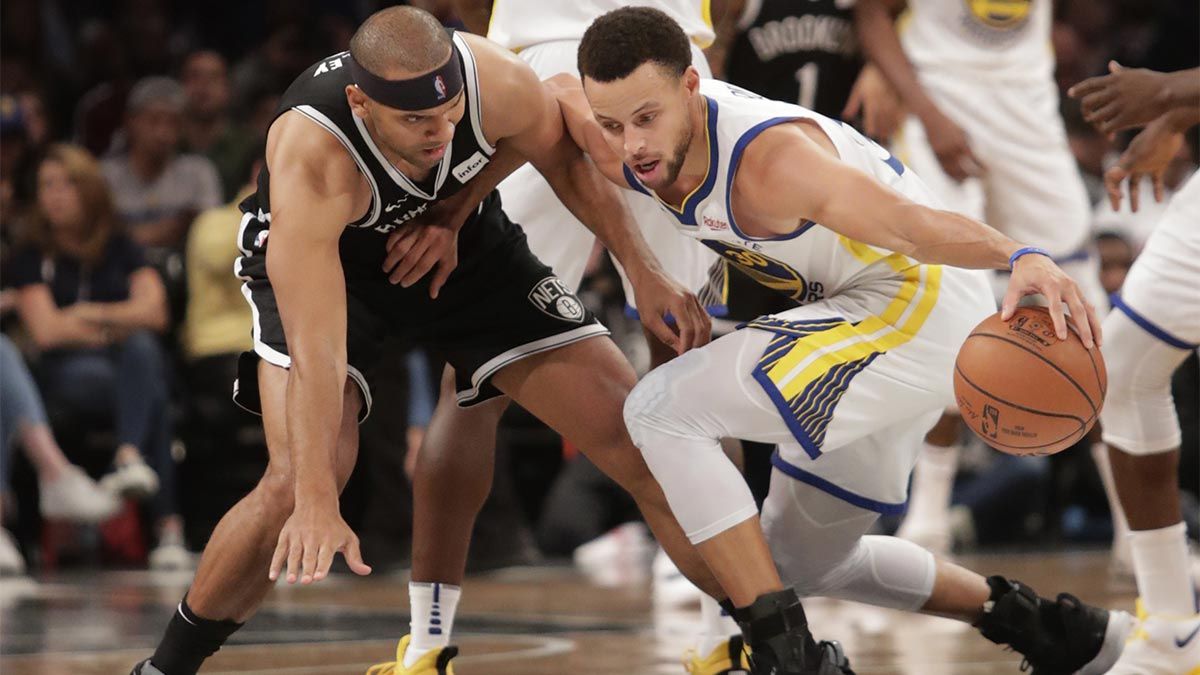 Curry has made at least five 3-pointers in every game, but even guys who don't stray outside the arc are benefiting from it.

"I know the uptick isn't that great but what goes with the teams shooting so many 3s is it spreads your defense out," Nets coach Kenny Atkinson said. "So now you're chasing those guys out to 4-point land and now that opens up driving."

That's usually how a guy like Griffin has traditionally gotten his points, but as he showed Philadelphia in his big night, his game also extends now into 3-point territory. Of course, so do Curry's and Durant's, and both are averaging more than 30 points.

Can they both keep that up for an entire season?

With LeBron James gone to the West, Kawhi Leonard or Giannis Antetokounmpo could be the best player in the Eastern Conference.

And one of their teams could replace James' as the class of the conference.

Toronto and Milwaukee are the NBA's lone remaining unbeaten and they meet Monday night in the first big game at the Bucks' new arena.

The Raptors led the East with 59 wins last season but were swept by James' Cavaliers in the second round. They needed something different and it looks like it may have been Leonard, who is averaging 26.6 points after playing in just nine games last season for San Antonio.

Just behind him is Antetokounmpo, but only because he was held to 21 points while playing a season-low 19 minutes after being evaluated for a concussion Saturday in a victory over Orlando. Before that, he'd started the season with 25 points and 15 rebounds in each of the first four games.

In their first season under Mike Budenholzer, the Bucks were leading the league in rebounds per game, and opponents field goal percentage in scoring margin during their perfect start.

OTHER GAMES TO WATCH

Houston at Brooklyn, Friday. The Rockets will hope to start their road trip by getting James Harden back from a hamstring injury.

Detroit at Philadelphia, Saturday. His matchup with rival Andre Drummond is an afternoon tip, giving Joel Embiid plenty of time for social media taunting after.

Toronto at the Lakers, Sunday. If Leonard does want to be in Los Angeles, here's a chance for LA fans to show the feeling is mutual.

Steve Kerr has coached against him in the last three NBA Finals, so he knows how good of a coach Tyronn Lue is.

Yet he wasn't surprised when Cleveland decided to fire Lue on Sunday.

"Nothing really surprises me in the NBA," Kerr said.

"Circumstances dictate everything in this league and as coaches we all know we are completely reliant on our talent, and if you've got talented players then you have a chance. And when LeBron left and the team sort of split up, it left Ty in a very precarious situation."

Larry Drew will be the interim coach for the Cavaliers, who try to end their 0-6 start when they host Atlanta on Tuesday.

As for Lue, Kerr expects to see him again.

"Guy's done a hell of a job," Kerr said. "I know from coaching against him in the finals several years in a row he's good. He knows what he's doing, he's well-prepared every night and if he wants another shot, he'll get one."