The Suns matched the third-longest winning streak in franchise history. It's their longest since a franchise-record 17 straight victories from Dec. 28, 2006, to Jan. 29, 2007.

Phoenix was able to do so following a 126-97 victory in Denver on Sunday. The Suns didn't show any fatigue on the second night of a back-to-back but acknowledged some mental lapses late.

Payne added 20 points off the bench for Phoenix, which had six players finish in double figures. Phoenix finished with 25 assists and went 45 for 87 (51.1%) from the field.

San Antonio point guard Dejounte Murray had 18 points, 11 assists and 10 rebounds for his seventh career triple-double. Murray brushed off the achievement with an explicative, instead focusing on the Spurs having lost five straight.

San Antonio (4-12) has lost eight of 10 for its second-worst start in franchise history.

"I mean that with everything in me," Murray said. "I am a winner. I have been a winner and I want to win."

Phoenix dominated much of the game, being patient offensively despite San Antonio's quicker pace.

"I always say the best available shot down every time," Booker said. "I think the dynamic of our team with (Ayton) being a rim threat and he can play out the pocket also surrounded by a lot of shooters and playmakers. We have the ability to get good shots every time downcourt."

The Spurs outscored Phoenix 20-10 to open the fourth quarter, pulling within 100-95 with six minutes remaining.

Having played for San Antonio coach Gregg Popovich and been an assistant coach on his staff, Phoenix coach Monty Williams was anticipating a late rally.

"I've been on that bench, I've been in that organization in those moments where they pull those games out," Williams said.

The Suns went on a 10-0 run following a timeout. San Antonio responded, outscoring Phoenix 10-2 to pull within 114-109 with 38 seconds remaining.

"We just have to be more sound in just with what works," Booker said. "A team has nothing to lose when they're down 15. They were desperate. They were getting steals and they were getting turnovers. When you're shooting the ball down 15, it's a lot easier."

The Spurs are winless when trailing by double digits, and they matched a season low with five 3-pointers on 20 attempts.

"People have to find ways to get (3-pointers)," Popovich said. "We have to try to help them. But I would be very disappointed if we weren't getting assists or we were getting murdered on the board or turning it over constantly." 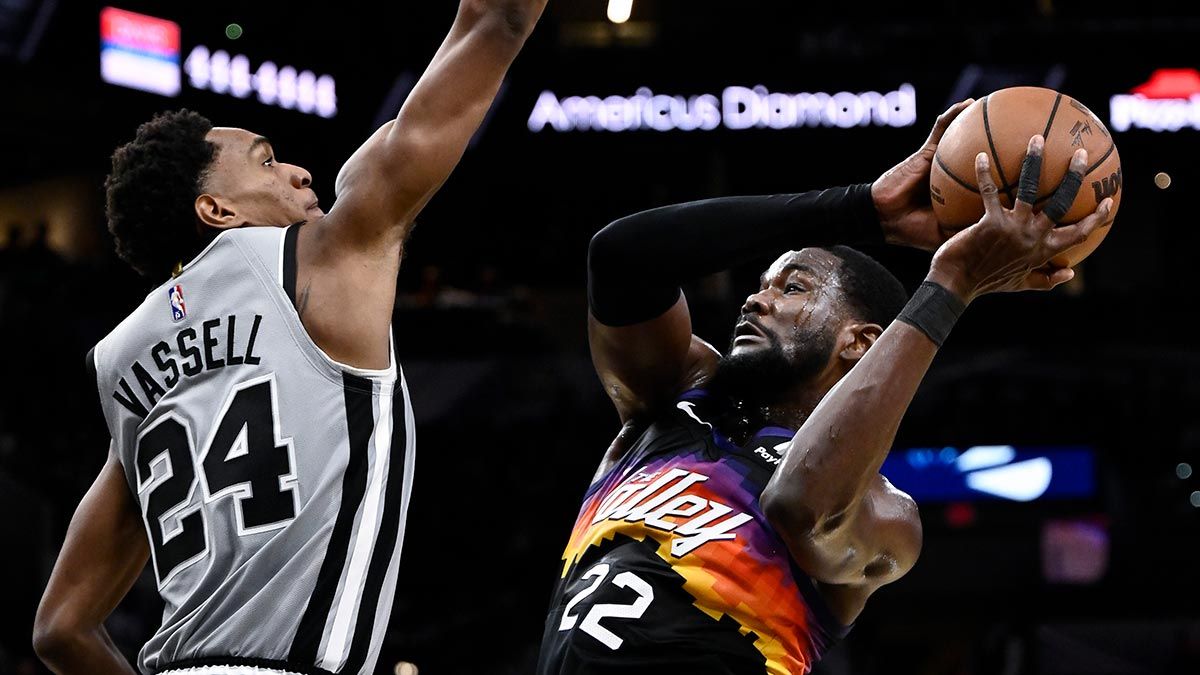 Suns: Frank Kaminsky missed his fourth straight game because of a stress reaction in his right knee. Kaminsky is averaging 10.6 points, 4.6 rebounds and 1.4 assists in 22.8 minutes this season as the primary big man off Phoenix's bench. … Cameron Johnson had 18 points after scoring a career-high 22 in Sunday's victory against Denver.

Spurs: Doug McDermott missed the game with an inflamed right knee. He sat out three games earlier this season because of soreness in the same knee. … Keita Bates-Diop made his fourth career start and first since his rookie season in 2019. … Jock Landale remains under the league's COVID-19 health & safety protocols. ... San Antonio's worst start came in 1997 when the club went 2-13.

Popovich was pragmatic after a bit of playfulness when asked about keeping up the spirits of his young roster during a difficult season.

"We bring them presents," Popovich said. "Cocoa puffs, try to keep them smiling, that sort of thing."

"We practice, try to get better," he said. "We got to get older and get more habitual and more consistent. It's a lot of young guys. You got to have patience. They are doing their best."

Suns: At Cleveland on Wednesday.