PHOENIX — Phoenix coach Monty Williams loves saying that he isn't going to get "happy on the farm" because his team's won a few games in a row.

After the Suns won for the 16th time in their last 19 games on Thursday night (Friday, Manila time) by cruising past the Golden State Warriors 120-98, even he had to admit things are going pretty darn well in the desert.

"When you're winning games you feel it," Williams said. "You know your team is doing what it takes to win games. We've won at home, we've won on the road."

Cameron Payne scored 17 points, Devin Booker added 16 and the Suns entered the All-Star break as one of the NBA's hottest teams. They're 16-3 since Jan. 28 and improved to 24-11 this season, which puts them second in the Western Conference.

"I wouldn't say for one second it's been easy, but we've been relentless," Payne said.

The Warriors were missing a big chunk of their usual production: Stephen Curry (rest), Draymond Green (ankle) and Kelly Oubre Jr. (wrist) were all out of the lineup. Because of that, they predictably struggled.

"Everybody on our team is tired and needs a mental break, needs a physical break," Warriors coach Steve Kerr said. "We got guys who are excited to see family and go home and maybe stay home for a few days without having to practice. It will be good for the group."

Seven Suns players scored in double figures and Williams was able to rest the starters in the fourth quarter. Jae Crowder had 14 points and made 4 of 7 3-pointers. Deandre Ayton had 11 points and 10 rebounds. Payne added 10 assists. 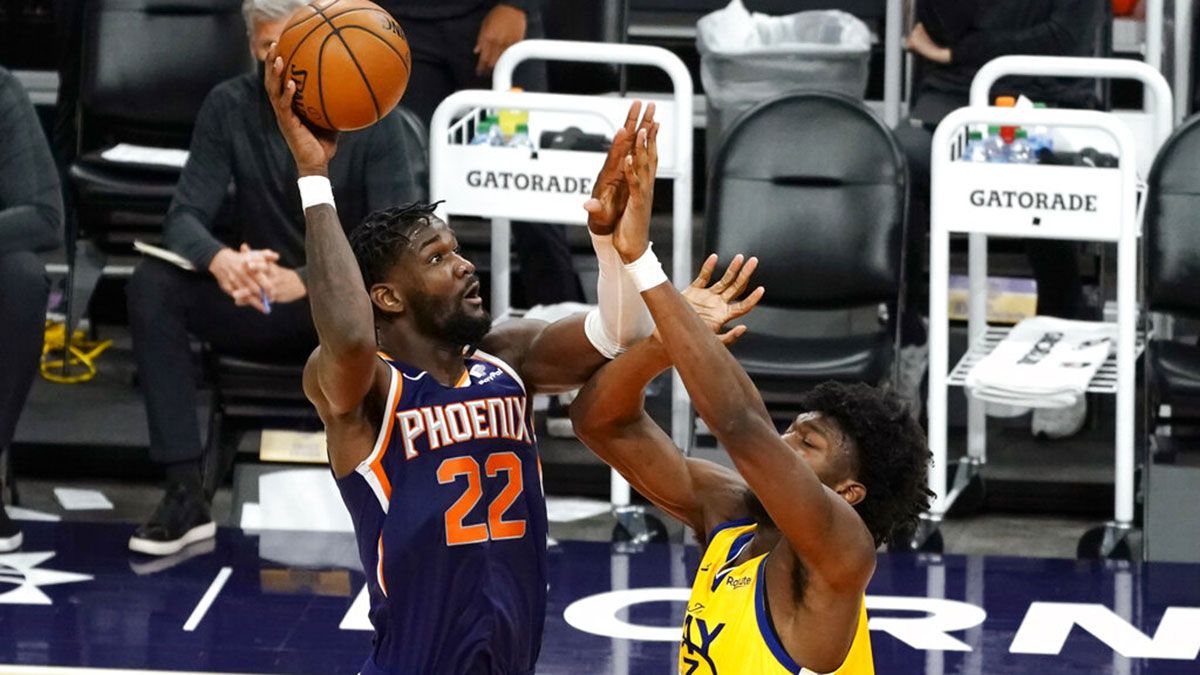 Deandre Ayton goes up for a jumphook over James Wiseman.

The Suns led by 20 points on the way to a 62-51 halftime lead and never trailed after the opening minutes. There were some sloppy moments with 16 turnovers, Williams found it hard to complain.

"It's one of those games you're grateful to get," Williams said. "You wish it was prettier. But at the end of the year you don't have pretty wins or ugly wins."

Booker banged knees with Golden State's Kent Bazemore during the first quarter, falling to the floor with a grimace on his face. He stayed in the game a few more minutes before checking out and walking back to the locker room.

The two-time All-Star guard returned but didn't have his usual burst. He finished just 6-of-20 shooting from the field.

Warriors rookie guard Nico Mannion got the first start of his career against the Suns.

The 6-foot-2 Mannion has plenty of Arizona ties. He played one season in college for the Arizona Wildcats before declaring for the NBA draft and was a star during his high school days in Phoenix.

He finished with a career-high nine points and six assists in 31 minutes.

Warriors: Kerr said pregame that Curry's rest against the Suns had been planned for about a week. It was just the second game Curry has missed this season. He's averaging 29.7 points per game.

Suns: Second-year forward Cameron Johnson didn't play against the Warriors because he was placed in the league's COVID-19 health and safety protocol. ... Arizona Cardinals quarterback Kyler Murray was sitting courtside wearing an Oakland A's hat. The A's drafted Murray with the 9th overall pick in the 2018 MLB draft but allowed him to continue his college football career. Murray entered the NFL draft after winning the 2018 Heisman Trophy.

Warriors: Open the second half of the season at the Los Angeles Clippers next Thursday.

Suns: Open the second half at Portland next Thursday.
___