Suns face tough task in Milwaukee, where Bucks are 9-1 in postseason

MILWAUKEE — The Phoenix Suns say they aren't feeling sorry for themselves after squandering a 2-0 lead in the NBA Finals and moving within one game of elimination.

They realize they're still two wins away from capturing the first league title in franchise history.

Phoenix coach Monty Williams said on Monday (Tuesday, Manila time) the Suns are showing the same spirit that helped them get this far in their first playoff appearance since 2010. The Suns have lost three straight to the Milwaukee Bucks, who can close out the Finals on their home floor on Tuesday.

"I saw yesterday when we got on the plane, the guys had the same look in their eyes," Williams said. "When I came down this morning for meetings, guys were down there talking, having breakfast. It was pretty cool to watch. So those kinds of losses are hard, but if you're going to do anything big, you have to overcome those kinds of hards.

"I don't know of any team that has won a championship that has just kind of strolled into it. So our guys, we have talked about that, the deep playoff hurts that happen and the ability to bounce back from that."

A big difference between Phoenix and Milwaukee is that the Bucks have experienced plenty of recent playoff heartbreak.

Milwaukee was the league's top overall seed in 2019 and 2020 but failed to reach the Finals either year. While Chris Paul and Jae Crowder possess plenty of playoff experience, teammates including Devin Booker, Deandre Ayton and Mikal Bridges made their postseason debuts this year.

"The message is stay together, fight each and every possession and embrace where you are right now," Crowder said.

The Suns face the unenviable task of having to win at Milwaukee, where the Bucks own a 9-1 postseason record. The Suns posted an NBA-best 24-12 road record in the regular season — including a win at Milwaukee — and are 6-4 away from home in these playoffs.

That gives the Suns confidence they can bounce back, even from a loss as painful as the 123-119 Game Five defeat.

"Coming into the next morning probably after a loss, the locker room, you probably wouldn't know that we just lost a game, a Game 5 at home," Ayton said. "You know, just how we walk in and everybody's just so full of spirit and energy, it's insane."

Booker is competing with Milwaukee's Jrue Holiday and Khris Middleton for an NBA title, but they'll become teammates as soon as the Finals end when they head to Tokyo to join Team USA for the Olympics.

"I think we'll be fine," Middleton said. "Right now, we haven't said a word to each other. I'm sure we won't be best buddies during Team USA, but we'll be teammates, for sure. We'll be on the same path, talking basketball X's and O's, trying to get the job done. That's what being competitors is all about, but also what being a teammate is all about."

"It's never personal between who you're going with, unless lines are crossed," Booker said. "Those guys aren't that type and I would never go that way with them, because there's a high respect level for each other. I think that's why we're in the position that we're in right now." 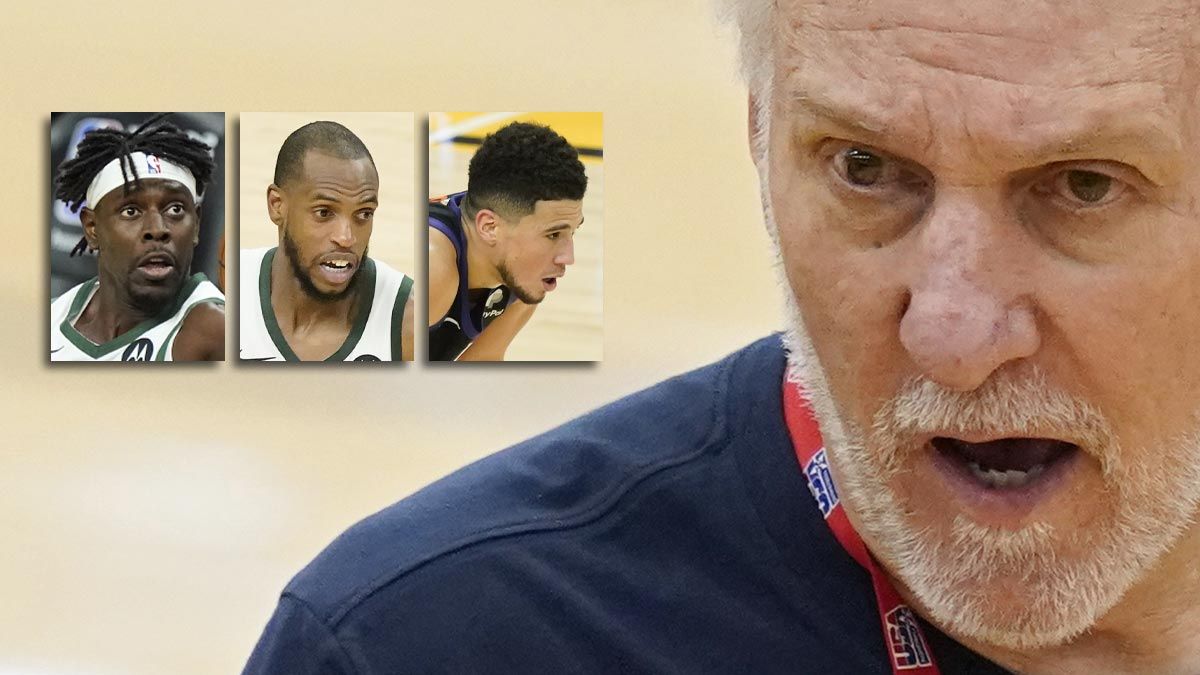 HEY, I KNOW THAT GUY

Bucks forward Giannis Antetokounmpo said he noticed LeBron James was sitting courtside for Game FIve but didn't speak with him.

James is the star of "Space Jam: A New Legacy," which premiered over the weekend.

The Suns averaged 37 3-point attempts over the first two games of the Finals as they built a 2-0 lead. That dropped to 24.3 3-point tries over the last three games.

"I think with the team and the capabilities of the shooters that we have on this team, that we need to generate more 3s," Booker said. "Obviously, they're switching a lot and staying home on shooters. So there's just a way of figuring it out."