NEW YORK — The NBA has suspended Phoenix Suns and Phoenix Mercury owner Robert Sarver for one year, plus fined him $10 million, after an investigation found that he had engaged in what the league called "workplace misconduct and organizational deficiencies."

The findings of the league's report, published on Tuesday (Wednesday, Manila time), came nearly a year after the NBA asked a law firm to investigate allegations that Sarver had a history of racist, misogynistic and hostile incidents over his nearly two-decade tenure overseeing the franchise.

Sarver said he will "accept the consequences of the league's decision" and apologized for "words and actions that offended our employees," though noted he disagreed with some of the report's findings.

The report said Sarver "repeated or purported to repeat the N-word on at least five occasions spanning his tenure with the Suns," though added that the investigation "makes no finding that Sarver used this racially insensitive language with the intent to demean or denigrate."

The study also concluded that Sarver used demeaning language toward female employees, including telling a pregnant employee that she would not be able to do her job after becoming a mother; made off-color comments and jokes about sex and anatomy; and yelled and cursed at employees in ways that would be considered bullying "under workplace standards."

The $10 million fine is the maximum allowed by NBA rule.

"I take full responsibility for what I have done," Sarver said. "I am sorry for causing this pain, and these errors in judgment are not consistent with my personal philosophy or my values. ... This moment is an opportunity for me to demonstrate a capacity to learn and grow as we continue to build a working culture where every employee feels comfortable and valued." 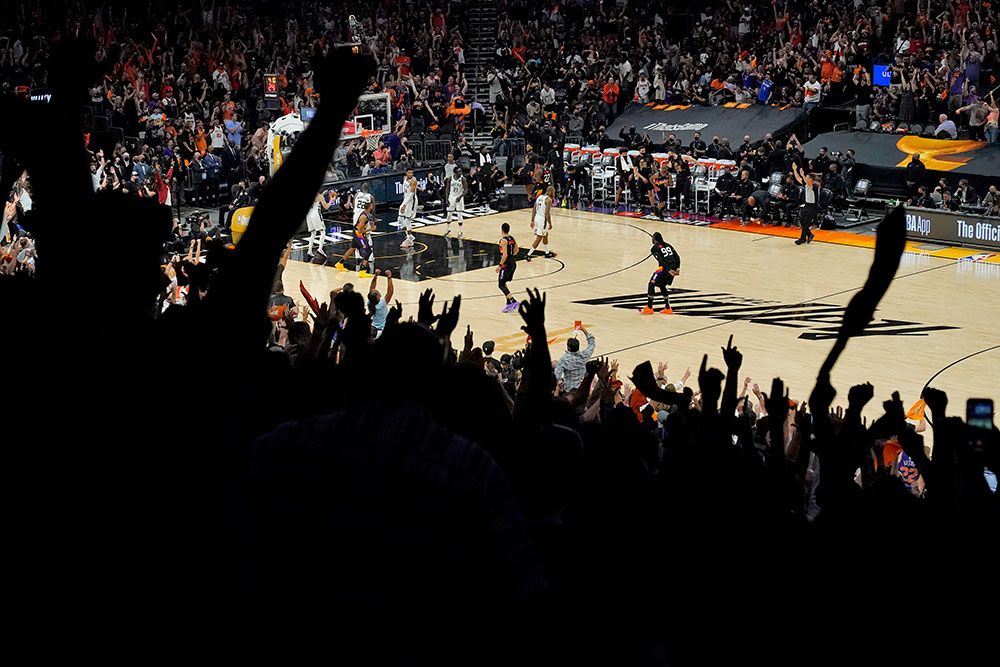 Sarver, the league said, cannot be present at any NBA or WNBA team facility, including any office, arena, or practice facility; attend or participate in any NBA or WNBA event or activity, including games, practices or business partner activity; represent the Suns or Mercury in any public or private capacity; or have any involvement with the business or basketball operations of the Suns or Mercury.

The league said it would donate the $10 million "to organizations that are committed to addressing race and gender-based issues in and outside the workplace."

"The statements and conduct described in the findings of the independent investigation are troubling and disappointing," NBA Commissioner Adam Silver said. "We believe the outcome is the right one, taking into account all the facts, circumstances and context brought to light by the comprehensive investigation of this 18-year period and our commitment to upholding proper standards in NBA workplaces."

It's the second-largest penalty — in terms of total sanctions — ever levied by the NBA against a team owner, behind Donald Sterling being banned for life by Silver in 2014. Sterling was fined $2.5 million, the largest allowable figure at that time, and was forced to sell the Los Angeles Clippers as part of the massive fallout that followed him making racist comments in a recorded conversation.

The allegations against Sarver were reported by ESPN last year, which said it talked to dozens of current and former team employees for its story, including some who detailed inappropriate behavior. He originally denied or disputed most of the allegations through his legal team.

On Tuesday, Sarver's representatives said the investigation's findings "confirmed that there was no evidence, whatsoever, to support several of the accusations in ESPN's reporting from November 2021."

"While it is difficult to identify with precision what motivated Sarver's workplace behavior described in this report, certain patterns emerged from witness accounts: Sarver often acted aggressively in an apparent effort to provoke a reaction from his targets; Sarver's sense of humor was sophomoric and inappropriate for the workplace; and Sarver behaved as though workplace norms and policies did not apply to him," read the report from the New York-based investigating firm of Wachtell, Lipton, Rosen & Katz.

Sarver will have to complete a training program "focused on respect and appropriate conduct in the workplace" during his suspension, the league said.

Sarver, through his attorney, continued denying the allegations as recently as June in a letter to the league and insisted the claims against him were "demonstrably false."

The attorney, Thomas Clare, wrote that Sarver's record shows a "longstanding commitment to social and racial justice" and that it attests to his "commitment to diversity, equity, and inclusion."

"Mr. Sarver is one of few NBA owners who continues to support and advance the development of women's professional basketball," Clare wrote, citing upgrades to the Mercury team facilities, how the Suns claim a league-best rate of 55% employment of minorities within its front office and how more than half of the Suns' coaches and general managers in Sarver's tenure — including current coach Monty Williams and current GM James Jones — are Black.

Among the league's findings:

— That Sarver engaged in "crude, sexual and vulgar commentary and conduct in the workplace," including references to sexual acts, condoms and the anatomy, referring to both his own and those of others.

— The investigation also found that Sarver sent a small number of male Suns employees "joking pornographic material and crude emails, including emails containing photos of a nude woman and a video of two people having sex."

— Sarver, the investigation found, also exposed himself unnecessarily to a male Suns employee during a fitness check, caused another male employee to become uncomfortable by grabbing him and dancing "pelvis to pelvis" at a holiday party, and standing nude in front of a male employee following a shower.

— He also made comments about female employees, the investigation found, including the attractiveness of Suns dancers, and asked a female Suns employee if she had undergone breast augmentation.

The league also will require the Suns and Mercury to engage in a series of workplace improvements, including retaining outside firms that will "focus on fostering a diverse, inclusive and respectful workplace."

Employees of those organizations will be surveyed, anonymously and regularly, to ensure that proper workplace culture is in place. The NBA and WNBA will need to be told immediately of any instances, or even allegations, of significant misconduct by any employees.

All those conditions will be in place for three years.

The league said the results of the investigation were based on interviews with 320 individuals, including current and former employees who worked for the teams during Sarver's 18 years with the Suns, and from the evaluation of more than 80,000 documents and other materials, including emails, text messages and videos.

Sarver and the Suns and Mercury "cooperated fully with the investigative process," the league said.

"Regardless of position, power or intent, we all need to recognize the corrosive and hurtful impact of racially insensitive and demeaning language and behavior," Silver said. "On behalf of the entire NBA, I apologize to all of those impacted by the misconduct outlined in the investigators' report. We must do better."