PHOENIX — The technical fouls were piling high in the third quarter. So was Devin Booker's point total and the Phoenix Suns' lead.

By the time the whistles finally stopped, the Suns were well on their way to a 134-105 victory over the Golden State Warriors on Tuesday night (Wednesday, Manila time) in a game that featured Klay Thompson's first career ejection and seven technical fouls.

"I thought emotionally, we kept it together when it was starting to get a little squirrelly," Suns coach Monty Williams said. "We were able to make enough plays during that time where we could get back to solid."

Both teams lost their cool at various times during the third quarter, with all of the technical fouls called in less than six minutes. Thompson received two quick technicals and was ejected after having words with Booker, who also received a technical because of the exchange.

At one point during the argument, Thompson held up four fingers to signify the four championships the Warriors have won over the past decade. Those rings didn't help on Tuesday. The veteran guard finished with two points on 1-for-8 shooting, including 0 of 5 from 3-point range.

It was the five-time All-Star's first career ejection in 651 regular season games.

"I love Klay Thompson, I have for a really long time," Booker said. "But that doesn't excuse us from being competitive and talking to each other. I've always admired his game, how he plays on both sides of the ball, and obviously the rings speak for themselves.

"But I'm going to bring it every time." 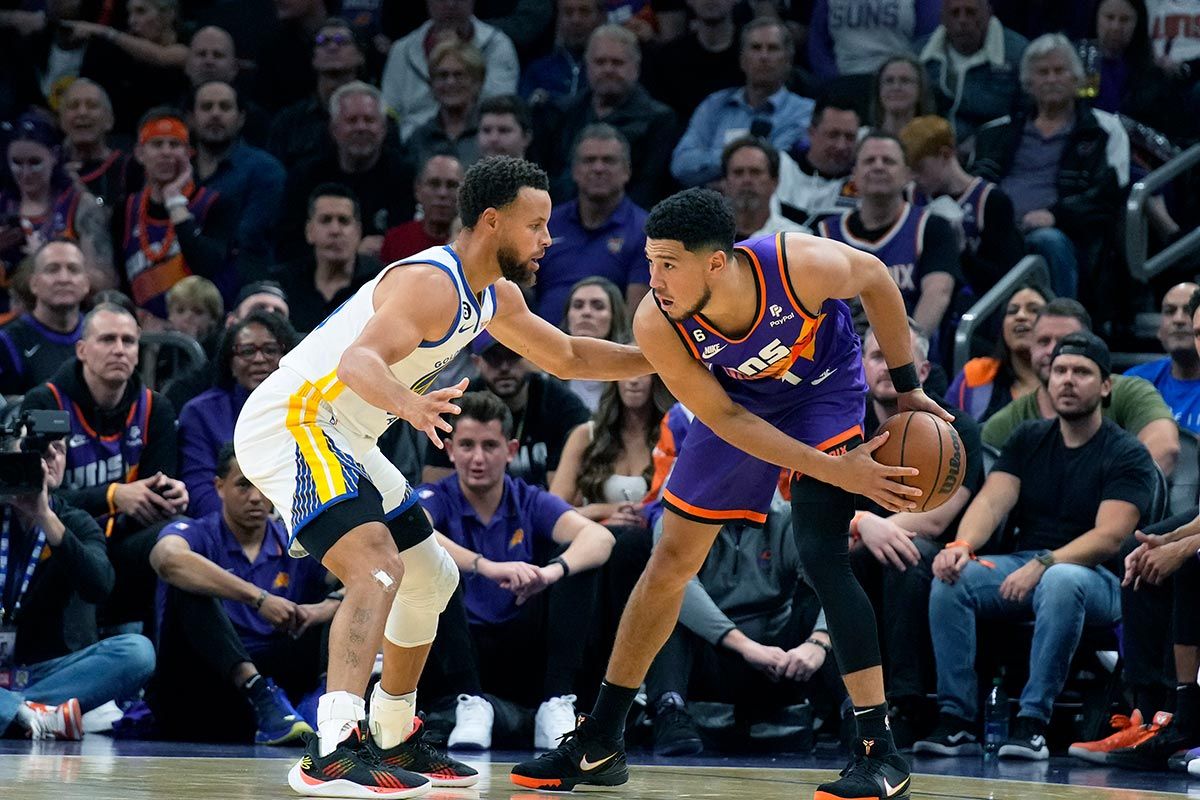 Golden State's Draymond Green and coach Steve Kerr, along with Phoenix players Chris Paul and Ayton also were whistled for technicals for various outbursts in the third, with most of that ire directed at the officials.

Said Green: "I'm not one to get into what guys are taking about on the floor. There was chirping on both ends."

Thompson didn't speak with the media following the game.

In the midst of the third-quarter chaos, the Suns were playing well and their lead which grew to 19 points by the end of the quarter. Without Thompson, the defending NBA champs were never able to mount a rally and the Suns kept a comfortable lead throughout the fourth.

Booker shot 10 of 19 from the field and 11 of 14 on free throws. The two-time All-Star added seven assists.

"His shot wasn't going," Kerr said. "Some decent looks early didn't go and I thought he got a little frustrated. I love the competitiveness. Obviously, he took it too far with the ejection, but I love the fire. Klay is an incredible competitor. We need his energy."

Phoenix used a 13-0 run midway through the first to take a 37-29 lead by the end of the quarter. Paul made a 3-pointer at the halftime buzzer to give the Suns a 72-66 lead at the break.

Booker scored 16 points in the first half while Ayton had 12 points and 11 rebounds. Poole led the Warriors with 14 first-half points.

The Suns improved to 3-1 for the season while the Warriors fell to 2-2.

"Once we got down, I thought we started jacking shots," Kerr said. "We stopped moving the ball in the second half. Same thing happened against Sacramento the other night. We kind of lost our way."

Suns backup guard Damion Lee played the Warriors for the first time since he signed with Phoenix during the offseason.

Lee played the previous four seasons with the Warriors, helping them win the title last season. He's already made a mark with his new team, sinking the game-winning jumper in the season opener against the Mavericks.

Lee finished with five points in 15 minutes on Tuesday.

Suns: Forwards Ish Wainright (low back pain) and Jae Crowder (not with team) weren't available. ... Shot 60% (9 of 15) from 3-point range during the first half. ... Backup center Jock Landale added 17 points on his 27th birthday.

Warriors: Return home to host the Heat on Thursday.

Suns: Host the Pelicans on Friday.