OKLAHOMA CITY — Thunder general manager Sam Presti took on a new look during the summer, just like the team he runs.

The normally clean-shaven Presti returned from a summer trip with a neatly groomed beard.

“I went to Vermont and let it go for a little bit, and then when I got back, nobody seemed to have a problem with it,” he said. “So I just kind of let it roll for a little while. I can’t tell you this is something that’s going to be around that much longer, but that is really the story behind it. So thanks, Vermont.”

If only the changes for the Thunder were as simple.

Paul George’s surprise trade request accelerated the end of an era. The Thunder sent George to the Los Angeles Clippers, then traded former MVP and scoring champion Russell Westbrook to Houston and rising star Jerami Grant to Denver. Now, for the first time, the Thunder enter a season with no players who were part of the team that debuted in Oklahoma City in 2008.

The Thunder got a slew of draft picks in the deals and some players who can help immediately. Oklahoma City added veteran point guard Chris Paul from Houston in the Westbrook trade and Danilo Gallinari and Shai Gilgeous-Alexander from the Clippers.

There are some significant holdovers, too.

Steven Adams has a chance to make a bigger name for himself. The 7-foot center averaged 13.9 points and 9.5 rebounds last season while shooting nearly 60% from the field.

Forward Andre Roberson, one of the league’s best perimeter defensive players, is back after missing the past 1 ½ seasons with a left knee injury. Presti said that Roberson will participate in training camp and is expected to play in the preseason.

“I’m excited, and I think everybody is excited, to watch and see how the team comes together through the year,” Presti said. “I think this team has a significant amount of discovery within it in terms of just learning about the new players that we have and how they fit with the existing group.” 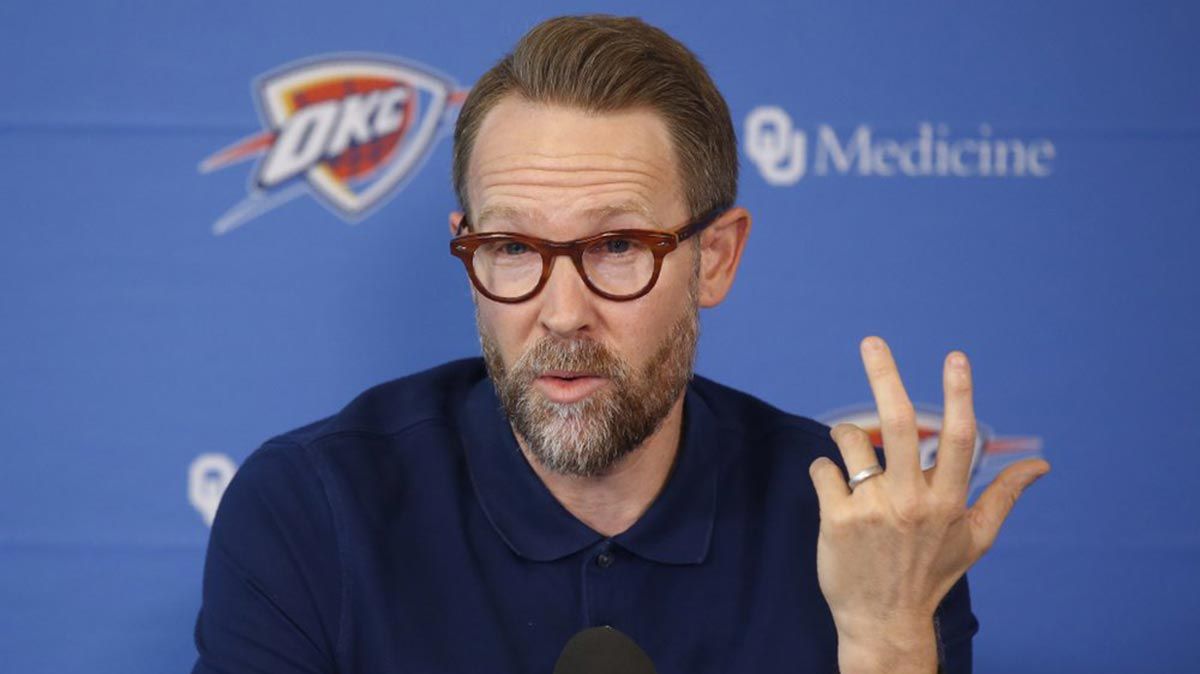 There is enough talent that Presti still sees the playoffs as a goal.

“What we want to do is be playing meaningful basketball at the end of the year,” he said. “We want to try to do everything we can to put ourselves in position to optimize the group that we have, and there’s just no shortcuts to that. It comes back to the commitment to the process that’s in place and being willing to be patient with that as we go through, especially with this much change as we’ve experienced.”