Steph Curry's No. 30 jersey retired by Davidson College as he receives bachelor's degree

DAVIDSON, N.C. — Stephen Curry knocked down another huge 3 — one that was 13 years in the making.

The Golden State Warriors point guard was inducted into the Davidson College Hall of Fame, had his No. 30 jersey retired and received his bachelor's degree in sociology following an elaborate solo graduation ceremony on Wednesday on the school's campus (Thursday, Manila time).

See GOAT watches GOAT: Tiger in the stands as Serena eliminates No. 2 Kontaveit

"This is an absolutely amazing day and an amazing moment for myself and my family," Curry said during the 90-minute ceremony. "The best decision I ever made was to come to Davidson College and pursue an education, join an amazing community and, most importantly, play for an amazing man who has built this program for what it is in (former Davidson coach) coach (Bob) McKillop."

There were signs scattered throughout Davidson's campus, congratulating and welcoming Curry back to the school, which is located about 25 miles north of Charlotte where Curry grew up.

Curry walked into a packed house at Belk Arena — where he played from 2006 to 2009 — wearing a graduation cap and gown, exchanging fist bumps with family, friends, former teammates and current students.

The four-time NBA champion and two-time league MVP turned pro after his junior season at Davidson, and only recently finished his final classes remotely to earn his degree.

The school was purposely waiting for Curry to graduate before retiring his number. 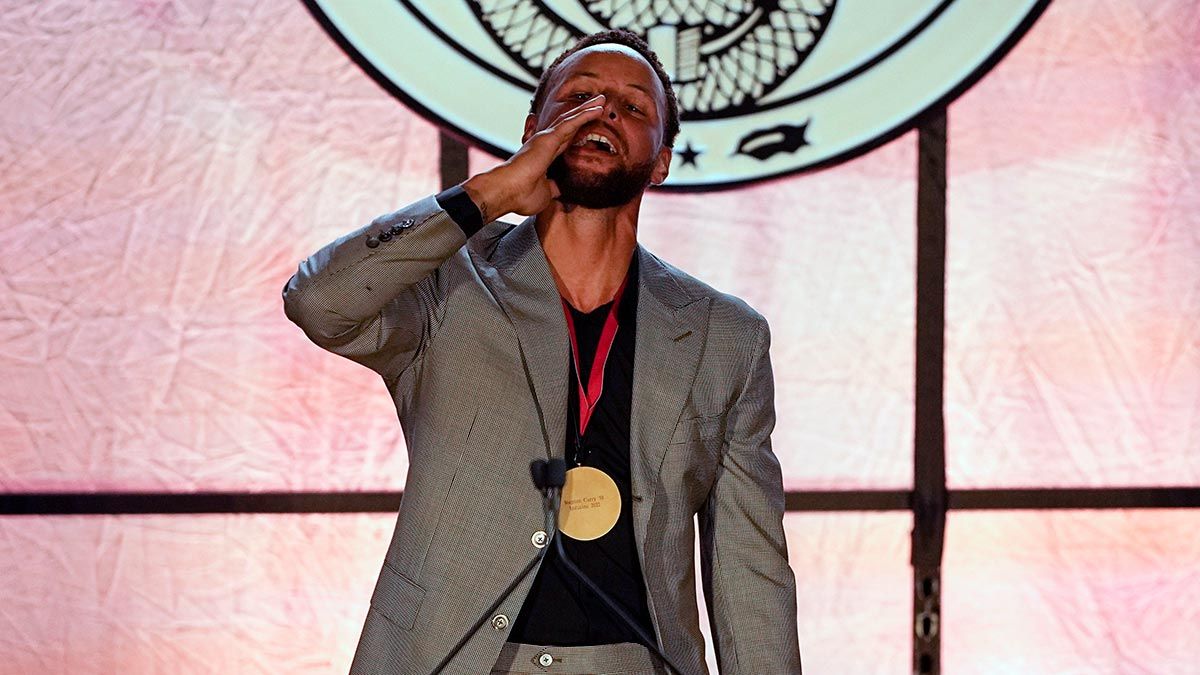 Steph Curry is the first Davidson athlete in any sport to have his jersey number retired.

"To earn this degree you showed determination and perseverance," Davidson president Doug Hicks said during the ceremony. "It would have been so easy, so straightforward to not complete your college degree. Yet in response to that idea, you did what you did to 29 other NBA organizations — you said, 'night, night!'"

Curry held back tears as he accepted his degree and, at the urging of the crowd, threw his cap into the air.

His mother, Sonya Curry, spoke at the ceremony, calling it a "dream come true" to see her son graduate.

"Today you can breathe and say, 'Check, it's done,' " Sonya Curry said. "Today you helped coach McKillop maintain his 100% graduation rate. And you set an example for others, young and old, that it's never too late to complete your education."

Sonya Curry said she initially wanted her son to go to a larger Division I school farther from home but changed her mind after watching the Wildcats practice.

"I told him if this is what you want to do, I will support you," she said.

McKillop talked about how Curry's unselfishness, saying he mailed postcards to Davidson fans, alumni and supporters thanking them after he was drafted seventh overall by the Warriors in 2009.

"How many young people have the capacity to do that?" McKillop said.

Curry closed his speech by saying, "I'm a graduate, I'm a Davidson alum and I am in the Hall of Fame — and that's pretty crazy."

Davidson's director of athletics Chris Clunie called Curry "Davidson's most extraordinary scholar-athlete" while inducting him into the school's Hall of Fame and retiring his jersey number, which was revealed in the rafters of the basketball court.

"Every father hopes their child makes their world a better place," said Stephen's father and former NBA player Dell Curry. "With that said, I'm a lucky dad because he's doing all of that. ... If you want to know how to treat people, look at that man right there."

Dell Curry added: "And the next Hall of Fame, you know where that is going to be."