by brett martel, ap
4 days ago

NEW ORLEANS — Stephen Curry scored 41 points, Draymond Green had 10 points, 15 assists and 13 rebounds, and the Golden State Warriors took a big step toward locking up a postseason berth with a 123-108 victory over the desperate New Orleans Pelicans on Monday night (Tuesday, Manila time).

The Warriors, who currently occupy a Western Conference play-in position, moved four games ahead of 11th-place New Orleans with seven games remaining. But these teams meet twice more, giving the Pelicans a small measure of hope — if they can figure out how to contain Curry.

Pelicans defenders often looked mesmerized by the Warriors star as he dribbled along the perimeter before pulling up for deep 3-pointers or initiating clever drives toward the rim. His eight 3s included a pull-up from 30 feet as he seemed to dazzle what should have been a hostile New Orleans crowd of nearly 4,000.

Andrew Wiggins added 26 points for Golden State, with 10 coming in a key stretch early in the fourth quarter.

Zion Williamson scored 32 points and Brandon Ingram added 19 points for the Pelicans, who trailed by as many as 25 in the first half of a game they urgently needed to win. Lonzo Ball, who helped spur an overtime victory in Minnesota two night earlier, continued to struggle with consistent production.

New Orleans was as close as six points when Willy Hernangomez's short hook made it 79-73 with nearly five minutes still remaining in the third quarter.

That's when Curry led another Warriors surge, highlighted by his step-back 3 from 28 feet that made it 92-76.

Despite Curry and Green heading to the bench early in the fourth quarter, New Orleans struggled to close the gap. Wiggins scored Golden State's first 10 points of the final period, hitting a pair of 3s and a leaning, left-handed layup before tumbling across the baseline.

Curry scored 21 points in the first half, including a trio of 3s in the first quarter, the final two of which had the crowd gasping. On the first, Curry pulled up from 30 feet. He came back soon after with a 27-footer that gave him 17 first-quarter points and the Warriors their first 20-point lead at 39-19.

Pool's 3 made it 58-33 before the Pelicans suddenly found a bit of momentum. They closed the half on a 19-6 run, which included Eric Bledsoe's double-pump pull-up from the top of the key as he was fouled from behind, and Ball's right wing 3 at the horn.

The spurt cut the Warriors' lead to 66-54 and gave the Pelicans hope. That is, until Curry squelched it. 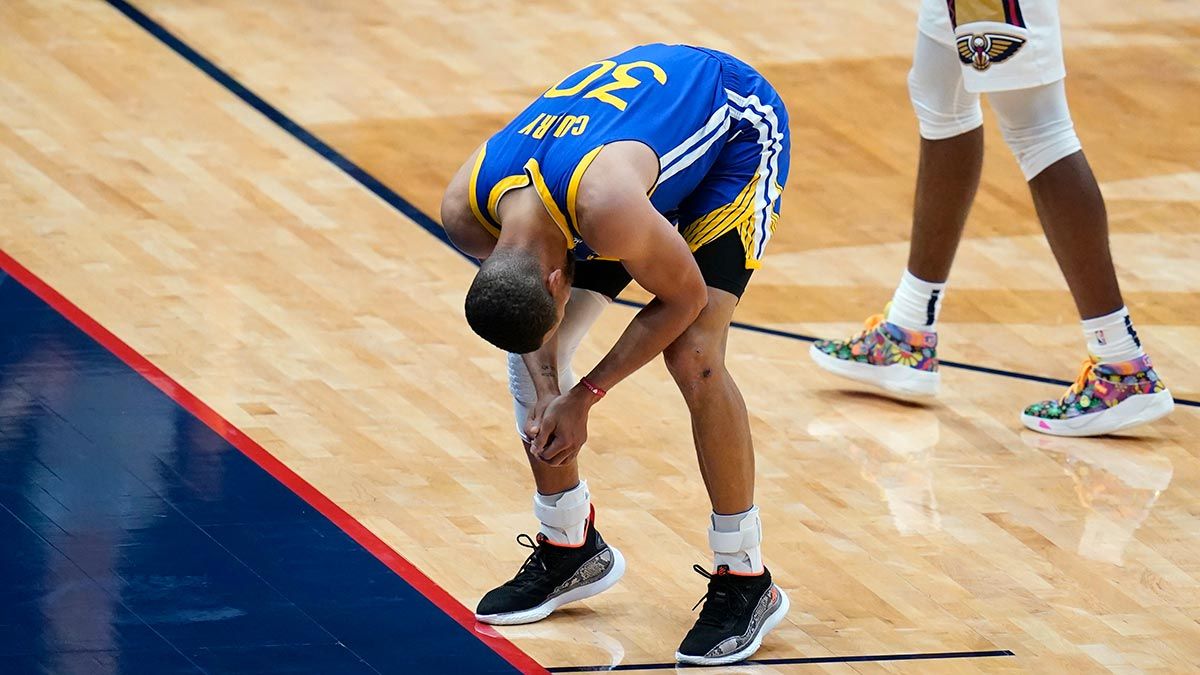 Steph Curry reacts after losing he ball out of bounds.

Warriors: Juan Toscano-Anderson scored 14 points and Poole finished with 11. ... Improved to 2-1 on their current four-game trip and have won nine of 13 overall. ... Curry's point total eclipsed his already prolific 36.5-point average during his previous 17 games. ... Curry has nine 40-point games this season, including six in the past 15 games. ... Combined for 17 3s. ... Outscored New Orleans 23-14 on fast breaks.

Warriors: Remain in New Orleans to play the Pelicans again on Tuesday night before heading home for their final six regular-season games.