Curry, in a shooting funk, gets praise from Kerr for his ballhandling

SAN FRANCISCO — Stephen Curry's shot is a little off — for now.

It hasn't stopped Steve Kerr from praising his star point guard's ballhandling, how he's dishing off and defending and all the other intangibles, like 34 assists to six turnovers the past four games.

But with Curry in a shooting funk, other Warriors are stepping up, including Jordan Poole, who scored 20 points to lead a balanced Golden State scoring attack on Sunday night (Monday, Manila time) and helped hold off a late rally by the Utah Jazz for a 94-92 win.

Curry added 13 points, but struggled again with his 3-point stroke a month after becoming the all-time NBA 3s leader, going 1 for 13 from deep and 5 of 20 overall.

"Steph looks great physically. The last few games he's playing some of his basketball in terms of handling the point guard duties," Kerr said. "He's taking care of the basketball, he's playing great defense, shots just aren't going. ... He's seemed inhuman for so long. I think everybody just expects him to be in a groove all season long and it's just not the way it works."

Curry's brother-in-law Damion Lee did his part, coming off the bench to hit four big 3-pointers and score 12 points for a Warriors team that was looking to build some momentum off Curry's buzzer-beater in a 105-103 win over Houston on Friday night.

The final minutes were close on Sunday, though. Joe Ingles tied the game at 89 with 4:09 to play.

The Warriors held on despite an 11-point fourth quarter by holding the Jazz to 17 in the period and 38.3% shooting. Royce O'Neale rebounded Bojan Bogdanovic's missed 3-pointer with a hand in his face and O'Neale couldn't convert a tip-in as the final buzzer sounded.

"That's how you've got to win when you're scuffling a little bit," Kerr said. "Really proud of the team."

Poole earned another start, taking the place of Klay Thompson, who was a late scratch with soreness in his surgically repaired left knee that sidelined him all of the 2019-20 season.

"His shot today looked good," Poole said. "We know how good of a shooter he is."

Bogdanovic — who has recently nursed an injured left ring finger — scored 21 points while Rudy Gobert grabbed 18 rebounds to go with 12 points for the Jazz, who lost their fourth straight to the Warriors. That streak dates back to exactly a year ago, when the Jazz won 127-108 in Utah on Jan. 23, 2021.

Rudy Gay's 3 with 11:37 left pulled the Jazz within 83-78 then Gobert dunked two possessions later to make it 83-80 before another slam off an offensive rebound at 9:46. Gay finished with 16 points and four 3s.

Golden State's Kevon Looney had his career-best streak of five straight games with double-digit rebounds end as he grabbed six boards. But his three-point play on a putback with 1:48 left meant plenty and he finished with 10 points.

Kerr called the basket the "key offensive possession of the game."

"It was big for me, I showed a lot of emotion," Looney said. 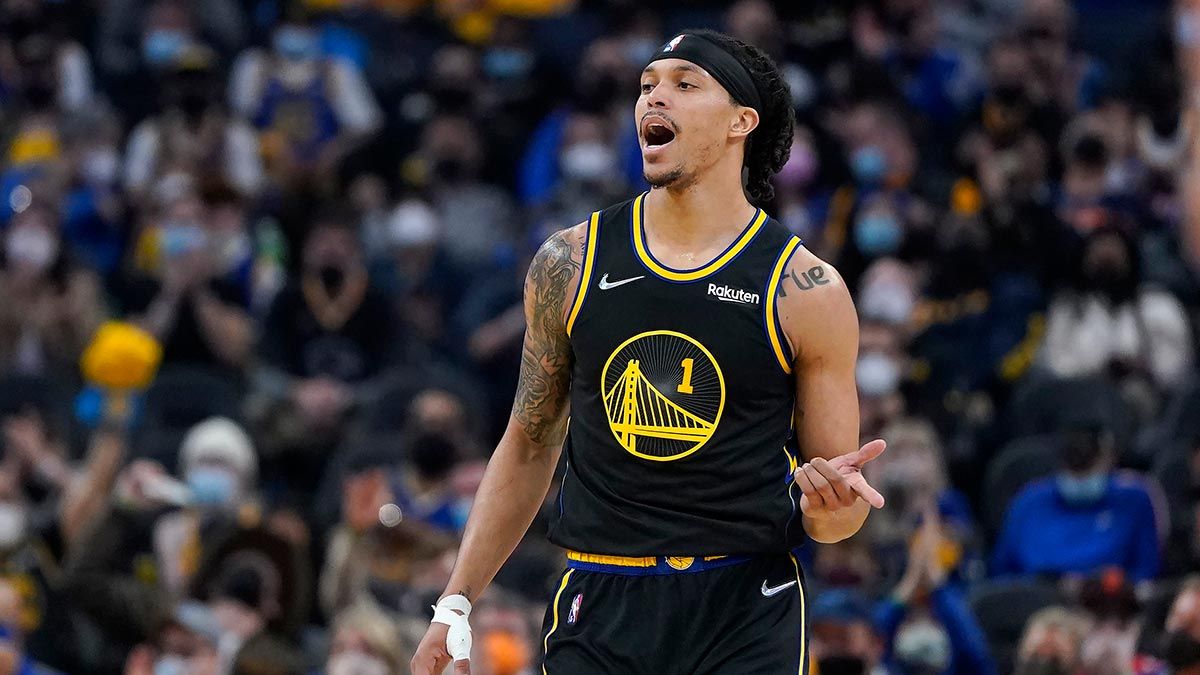 Curry, the reigning scoring champion, is just 35 for 117 from 3-point range this month.

Kerr recalled Thompson's NBA-record 37-point quarter from seven years ago, when he went off in the third quarter of a 126-101 win against the Sacramento Kings at Oracle Arena on Jan. 23, 2015.

"It was like a religious experience, one of the most powerful moments of my life," Kerr said.

Jazz: Donovan Mitchell sat out his third straight game with a concussion but coach Quin Snyder is keeping the guard in the mix by checking in regularly and providing the game plans. "Concussions are so variable. I feel for him in that sense," Snyder said. ... Former Warriors F Eric Paschall received a "Welcome Back to the Bay" and nice ovation when he checked in at the 6:53 mark of the first. He had six points in 12 minutes. ... The Jazz lost their third straight on Golden State's home floor.

Jazz: At Phoenix on Monday night to complete the back-to-back.

Warriors: Host the Mavericks on Tuesday night, looking to snap a three-game losing streak in the series and a four-game skid to Dallas at home.