Sixers face Pelicans in opener with no guarantee Simmons will play

CAMDEN, N.J. — Philadelphia 76ers coach Doc Rivers and the team he led to the best record in the Eastern Conference last season put their hands together in the middle of a huddle at the end of practice and counted off, "1-2-3! Together!"

Lingering outside the huddle, holding a basketball and looking uninterested was the $147 million puzzle piece in Ben Simmons. With Simmons focused and engaged, the Sixers are again a team to beat in the East this season.

But the Sixers open the season on Wednesday in New Orleans (Thursday, Manila time) with no guarantee that Simmons will play. He has practiced twice with the Sixers since ending his holdout. Meanwhile, the Sixers hold out hope the three-time All-Star guard wants to suit up again.

Simmons has dominated the headlines in Philadelphia since his baffling offseason trade request and then mystifying decision to report, showing up without warning last week.

He declined to talk to the media for the second straight practice on Monday — the Sixers say he's scheduled for Tuesday — and maybe then he can start to explain why he wanted out of Philadelphia. And now that he's back, how long does he plan to stay. 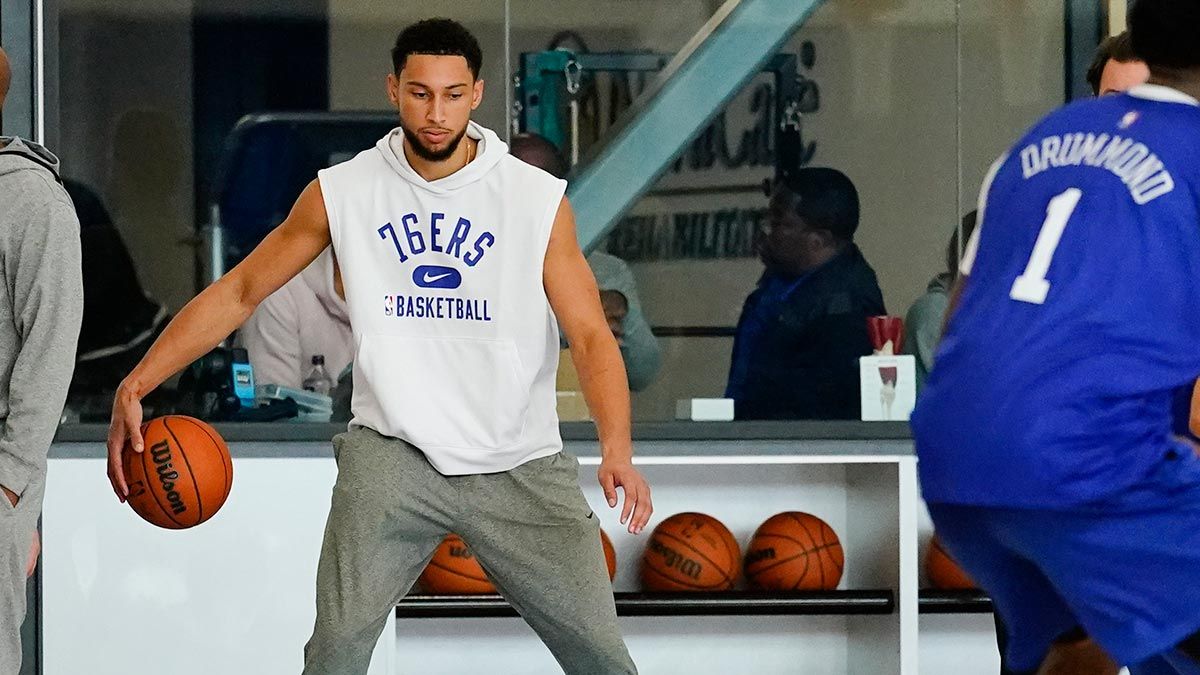 If Ben Simmons sits out, he'd be the only missing starter from last season's run to the Eastern Conference's top seed.

Tyrese Maxey ran the offense with the first team in the portion of practice open to the media, and Simmons mostly stood in a corner stretching or dribbling the basketball. He played defense on one drill, then walked off the court without saying a word to a teammate.

Rivers said he had no idea if Simmons will play on Wednesday.

Simmons, the No. 1 pick of the 2016 draft, was paired with Joel Embiid as the franchise cornerstones as the Sixers chase their first NBA championship since 1983.

Simmons, though, took the brunt of the blame for the top-seeded Sixers' second-round exit in last season's playoffs. He shot 34 percent from the free-throw line in the postseason and was reluctant to attempt a shot from anywhere on the floor late in games. That led to him spending critical minutes on the bench.

He'd be the only missing starter from last season's run to the Eastern Conference's top seed. Embiid, Danny Green, Seth Curry and Tobias Harris form a solid first four. Sixers President Daryl Morey has fielded offers for Simmons, but has yet to find a package to his satisfaction for the enigmatic guard.

Embiid, the NBA MVP runner-up, will have to limit the trash talking with Andre Drummond to practices this season. Drummond played for the Detroit Pistons and engaged in some physical and social media battles with Embiid through the years. That's on hold for now after Drummond, a two-time All-Star, signed as Embiid's backup. Embiid once accused Drummond of being unable to play defense. Drummond chirped Embiid wasn't worthy of his time until he could stay healthy for an entire season.

"We're in the NBA. At the end of the day, what kind of beef can you really have?" Drummond said.

But he has to adjust to life as a reserve for the first time since he was a rookie with Detroit in 2012-13.

Drummond, a four-time NBA rebounding champion, is a significant upgrade from last season over the aging Dwight Howard. Drummond said there's no issue with Embiid.

"We're two competitors that love the game of basketball," Drummond said. "We're like titans. We just clash. We play hard against each other. I have no animosity toward him, nor does he."

The Sixers edited Ben Simmons out of the in-game highlight films shown during preseason games. Depending on the what happens the next couple of days they may need to call the editor back for some last-minute splicing before Friday's home opener against Brooklyn.

CHANGING OF THE GUARD

Tyrese Maxey enjoyed the cameo role he shot over the offseason for the Adam Sandler movie "Hustle." He "had a blast" playing, well, a basketball player in the movie that filmed all over the city.

Maxey didn't get to share any scenes with Sandler, though, or play with him during off-hours pickup games.

"I heard he can pass the ball pretty well," Maxey said.

The Sixers need the same out of Maxey, who averaged eight points in averaging 15.3 minutes last season. He is close with Simmons and may start in his spot on opening night. Shake Milton, the other point guard, is out with an injury, and Isaiah Joe may see more playing time. Seth Curry could even run the point in Simmons' place.