SAN ANTONIO — Keldon Johnson scored 27 points and the San Antonio Spurs had their highest-scoring game of the season, beating short-handed Detroit, 144-109, on Sunday (Monday, Manila time) to extend the Pistons' road skid to 10.

San Antonio has won three straight and four of five to move into 10th in the Western Conference.

"They came out aggressively and kept it for most of the 48 minutes. That was nice to see," Spurs coach Gregg Popovich said. "A lot of guys got to participate, but, obviously, it wasn't a fair fight. The Pistons are in tough shape right now with all the guys they are missing."

Detroit had five players out in the league's health and safety protocols, including top draft pick Cade Cunningham, Jerami Grant and Kelly Olynyk are also out with injuries. Additionally, Pistons coach Dwane Casey was absent due to personal reasons unrelated to the virus.

"We had limited subs to go to, so we were trying to just move pieces around and trying to get to maybe a combination that would work for us," Pistons acting coach Rex Kalamian said.

Detroit has lost three straight since snapping a 14-game skid with a victory over Miami on Dec. 19.

The Spurs were among the few teams not impacted by COVID-19 this season, but that changed Sunday morning when Dejounte Murray was ruled out.

San Antonio overcame the loss of its starting point guard by sharing the workload. The Spurs had a season-high 39 assists, with Tre Jones having a career-high 11 and Derrick White adding 10.

Detroit started Derrick Walton Jr., signed Saturday on a hardship contract, as the Pistons had their 12th different starting lineup. The lack of familiarity was evident quickly, as Poeltl strolled for an uncontested layup off a simple screen as the Pistons stared at each other following a missed assignment on the game's opening possession.

"We have a lot of guys touching the floor for some NBA minutes for the first time in a long time," Kalamian said. "I think we played hard. We didn't play necessarily smart so much. That was kind of our problem. We didn't share the ball enough in the first half."

The Spurs shot 56 percent from the field in winning their seventh straight at home over the Pistons.

The Pistons committed 14 turnovers and were 8 for 32 on 3-pointers. 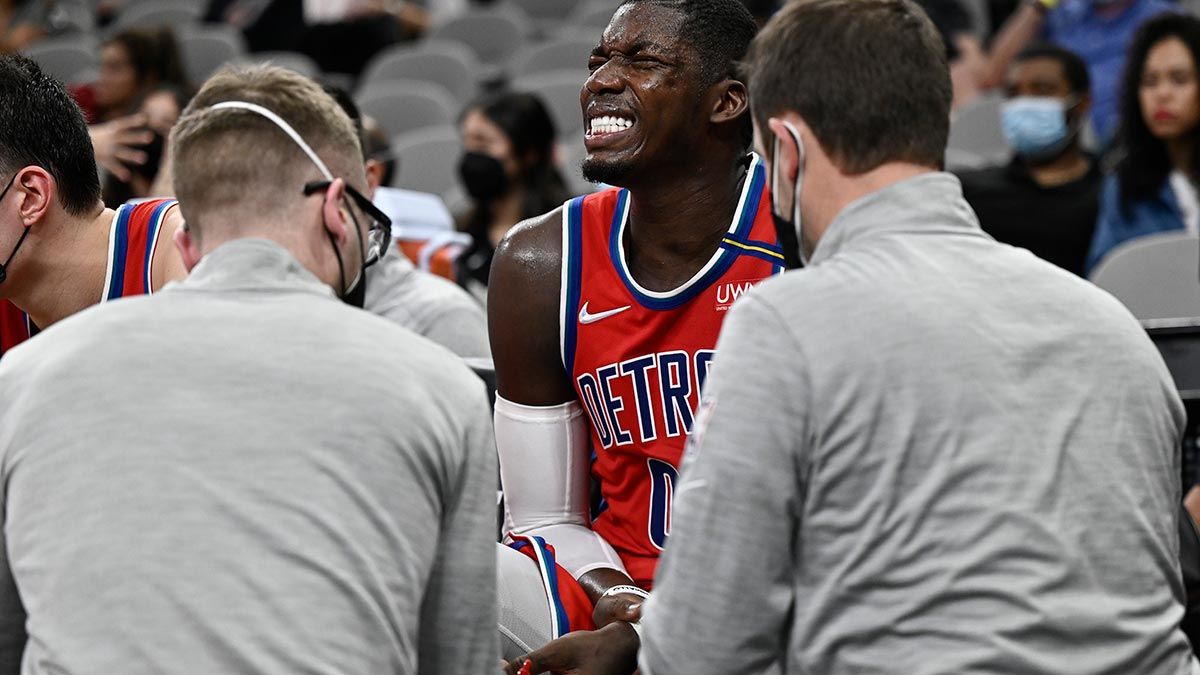 Detroit’s Cheick Diallo injures his hand in a fall in second-half action.

Pistons: Isaiah Stewart, Saben Lee, Killian Hayes and Rodney McGruder are also out due to the league's health and safety protocols. … Grant missed his eighth straight game after tearing ligaments in his right thumb. … Olynyk remains out after suffering a Grade 2 MCL sprain in his left knee. He has not played since Nov. 10 against Houston. … The Pistons' last road win was Nov. 13 in Toronto. They are 2-14 on the road.

Garza had 20 points and six rebounds in his third start before fouling out with 8 1/2 minutes remaining.

The sixth foul confused Garza and the Pistons.

"They had him for six fouls, and we had him for five, so I'm not quite sure," Kalamian said. "We'll go back and find out where that sixth foul came in, but we wish he could have gotten a few more minutes. We love Luka's effort and energy and spirit."