KENJI Duremdes and Echo Laure are well on their way to following in the footsteps of their famous fathers after leading the latest batch of standouts in the National Training Camp of the Jr. NBA Philippines presented by Alaska which concluded on Sunday at the SM Mall of Asia Music Hall.

Among the campers from Luzon, Visayas and Mindanao, 16 were chosen as these year’s All-Stars. Among the eight boys, Kenji and Echo, the 14-year-old sons of former PBA cagers Kenneth Duremdes and Eddie Laure respectively, led the awardees. Joining them are Kenji’s La Salle Greenhills teammates Jan Clement Macalalag and Victorino Torres. 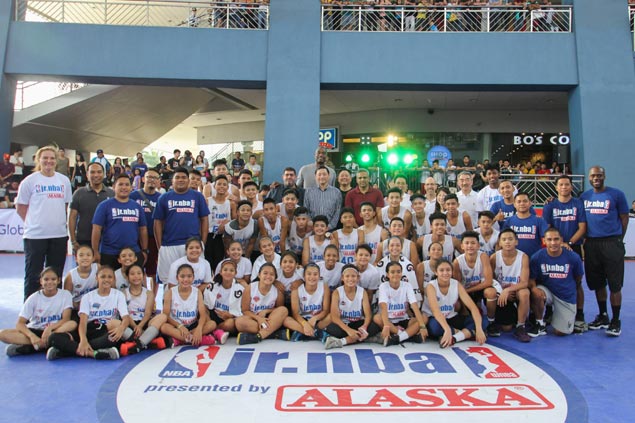 Meanwhile, Catrina June Biongcog of Xavier University-Ateneo de Cagayan and Jed Cabellon of Southwestern Univerrsity of Cebu were selected as the Jr. NBA Philippines 2017 Coaches of the Year.

Duremdes was also named Jr. NBA MVP for the boys while Solis took the honor for the girls.

[See Kenneth Duremdes sees a lot of himself in son Kenji]

On the other hand, Laure received the Alaska Ambassador award for the boys, and Nolasco got the nod for the girls.

Other players who also received special awards were Mariela Avila of Lucena and Zean Paolo Moreno of Cagayan De Oro for the Panasonic Rising S.T.A.R. Award; Nolasco and Espinosa as Cloudfone All-Star Players of the Game; Princess Delig of Cebu and Austria for the Gatorade Hustle Award; Yza Camila Alarcon of Manila and Maverick John Vieto of Lucena got the Globe Telecom Sportsmanship Award;