PHILADELPHIA — Ben Simmons clanked one free throw off the back of the rim, so he took a breather, fist-bumped Joel Embiid, paced, walked back to the line and bonked another shot.

Hey, the 76ers still led the Hawks by 23 points at that point, Game Five seemed in the bag, so what's two missed free throws?

Just one second in game time later, Simmons was back at the line — Atlanta using a Hack-A-Ben strategy to its advantage in the playoffs — and Simmons swished one to the roar of the crowd.

Back for the second shot, a 76ers fan wearing a No. 25 Simmons T-shirt simulated proper form from the stands, only to have Simmons knock one off the front of the rim.

Yes, a three-time All-Star in the first year of a $177 million max deal received a pity ovation in Philly.

Simmons missed a stunning 10 free throws in Game Five —and that seemingly insurmountable lead turned into an epic defeat that helped usher the top-seeded Sixers out of the postseason.

Fans were devastated, the media pounced and Simmons shouldered the blame for the collapse.

No matter the reaction, the No. 1 pick is the No. 1 question headed into the summer: Can the Sixers fix Ben Simmons?

Better yet, is Simmons willing to fix his flaws?

Sixers President Daryl Morey tiptoed around most Simmons questions on Tuesday, though he said he still believed the guard could be part of a championship nucleus with Joel Embiid and Tobias Harris. The door, though, is always open for a deal.

"Not addressing Ben Simmons, but any move that will help our team win the championship or improve our odds, we will look at or do if it makes sense," Morey said.

Simmons shot 25 for 73 (34%) from the line in the playoffs and missed 27 alone against the Hawks. He is a 5 for 34 career 3-point shooter over four NBA seasons and shot at least 60% from the foul line each of the last three regular seasons.

Herb Magee, known as the Shot Doctor over a Hall of Fame career as a Philadelphia college basketball coach, attended Sixers practices when Brett Brown coached the team and the two discussed ways they could fix Simmons' form.

"He has that look on his face where he's afraid to go to the foul line," Magee said. "He almost has no chance of making it. The ones that do go in are probably more luck than anything else. It's a shame because he's extremely talented."

"I don't see any reason why he shouldn't be a bare minimum of 70 percent from the line," Magee said. "But his technique is wrong."

Simmons' woes drew comparisons to fellow Philly No. 1 draft pick Markelle Fultz, who lasted 33 games over two seasons before he was traded to Orlando, in part because of a hitch in his shot.

Simmons pinned his playoff failures on a mental block more than mechanics. Once the misses started coming in waves, especially under the playoff spotlight and with scant time to hit the gym and practice, Simmons could never reverse the trend. 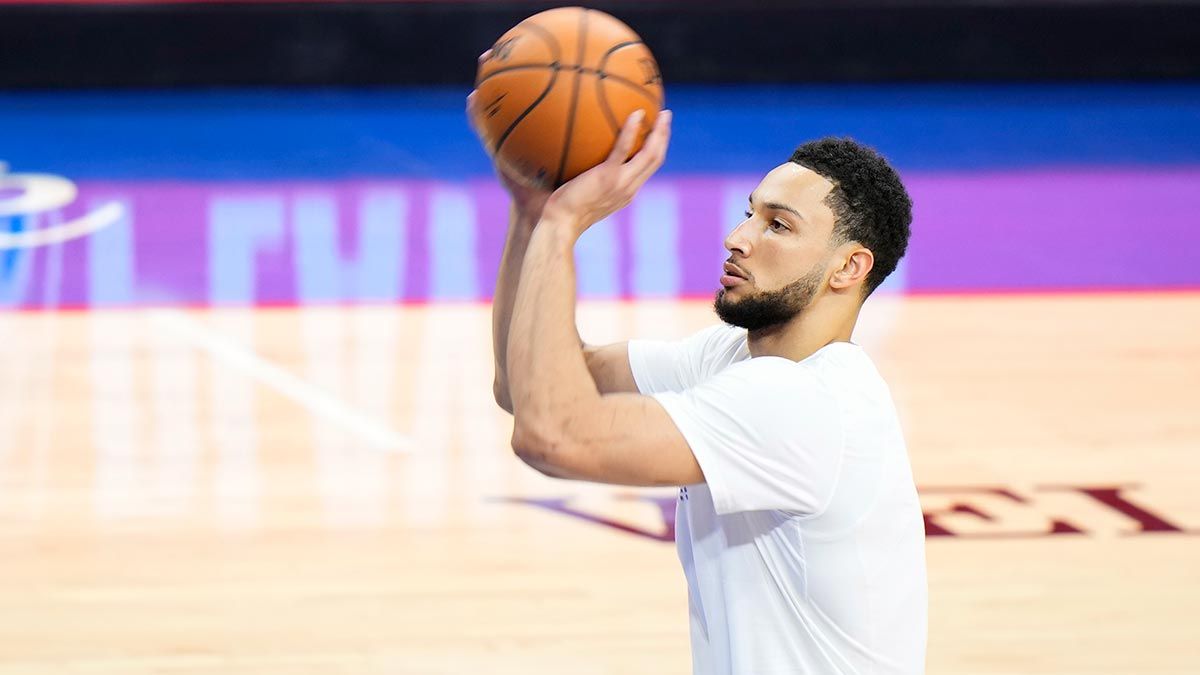 Joel Fish, director at the Center for Sport Psychology in Philadelphia, has worked extensively with athletes of all ages and skill levels, from youth sports through athletes with the Eagles, Sixers, Flyers and Phillies for 30 years. Fish, who has not worked with Simmons, said the underlying feelings of shame, embarrassment and humiliation that come with repeated failures can inhibit even the hardest workers from getting any better.

"On the one hand, it's the easiest of sports tasks. It's the same shot every time," Fish said. "Having said that, the expectations become, 'Why can't you do this?' They become higher on free throws. So if you can't do it, the same shot every time, the shame, embarrassment and humiliation is even more than if you shoot 25% of your 3s instead of 35% percent."

Fish said a broken athlete needs to develop a personal "mental skills game plan" that can help conquer any demons.

"Mental blocks can be overcome," he said. "Part of the routine is, 'What am I feeling? I'm a little nervous. That's OK. I know what to do. Deep breath. Slow myself down. Check. My feelings aren't too high, too low.' Choose not to go there. You develop a routine that has a feeling part to it and a thoughts part to it. Check your feelings, check your thoughts."

There are other issues with Simmons. He has leaned on family to coach him during the offseason and often works outside the team's New Jersey headquarters. At 6-foot-10, 240 pounds, Simmons could be a more natural fit at power forward rather than as the primary ballhandler. Morey either downplayed off-court concerns or left personnel decisions up to coach Doc Rivers.

Simmons also has not yet made a decision on playing for the Australian national team in Tokyo. Morey said Simmons could benefit from playing in the Olympics.

"I think it could, frankly, enhance" his game, Morey said. "There's skill work, but then playing games is helpful."

Simmons has found few positives over the last two months. Shaquille O'Neal claimed he would punch out Simmons if they were teammates and Charles Barkley said Simmons was "scared to death to shoot." Sixers center Dwight Howard posted an impassioned Instagram video imploring critical fans to leave Simmons alone and former Philadelphia Eagle Terrell Owens commented on the post, "you have to change the environment which means Ben is part of what needs to be changed."

Simmons chalked up the criticism to playing in Philly.