Sixers stretch streak to six with victory over Spurs

PHILADELPHIA — Joel Embiid had 31 points and 12 rebounds and the Philadelphia 76ers extended their winning streak to six games with a 119-100 win over the short-handed San Antonio Spurs on Friday night (Saturday, Manila time).

Embiid has scored at least 31 points in every game during the winning streak and has averaged 33.2 points and 10.5 rebounds in that stretch. The four-time All-Star entered Friday leading Philadelphia in scoring (26.7 ppg) and rebounding (10.7 rpg).

Seth Curry and Tobias Harris each scored 23 points for the Sixers, who never trailed.

Dejounte Murray scored 27 points for San Antonio, which was without six players due to health and safety protocols. The Spurs, playing their fifth game of a seven-game trip, have lost five of six.

Devin Vassell, Keldon Johnson, Tre Jones and Derrick White – who combined for 46 points in San Antonio's 99-97 win at Boston on Wednesday – joined Doug McDermott and Thaddeus Young on the sidelines due to COVID-19 protocols.

"Start whoever you want," said Spurs coach Gregg Popovich, who was missing four of his top seven scorers. "I don't even know half their names in there tonight."

In addition to regular starters Murray and Jakob Poeltl, Popovich began with Keita Bates-Diop, Bryn Forbes and Josh Primo. Forbes and Primo were making their first starts this season, while Bates-Diop was making his ninth.

Even at full strength, the Spurs, like practically every other team in the NBA, likely would have had trouble stopping Embiid. With so many regulars out, they had no chance, something Popovich knew beforehand.

"I don't think our game plan is going to amaze anybody," he said.

Embiid had several emphatic dunks, including driving slams with 6:29 left in the third and another with 3:50 to play in the quarter.

His biggest highlight, though, might have been a thunderous, one-handed jam with 31.1 seconds left in the first half that brought the roaring fans to their feet. Just 2 ½ minutes earlier, Embiid caused a hush in the crowd when he went down, clutching his right knee, after getting beat on a layup by Poeltl.

But, bolstered perhaps by the customary "M-V-P! M-V-P!" chants that rained down, Embiid showed he was just fine with a no-look, over-the-head pass to Matisse Thybulle before the monster dunk that helped Philadelphia to a 71-53 advantage at halftime.

The undermanned Spurs were just no match for Embiid or the 76ers. Embiid finished 10 of 23 from the field, 11 of 15 from the line and added seven assists.

San Antonio did get back Lonnie Walker IV and Devontae Cook, who missed the previous three games due to health and safety protocols, and signed Anthony Lamb and Tyler Johnson to 10-day contracts to fill some voids. 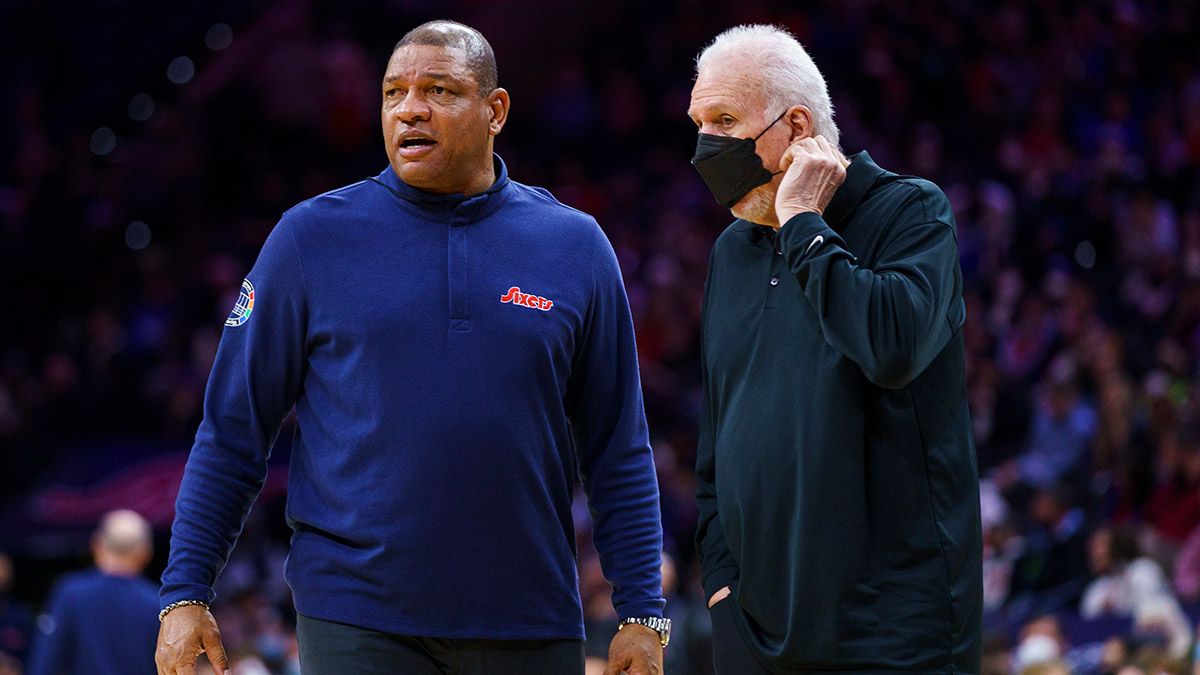 "Because he's older, the young generation has no idea what he meant to America," Rivers said. "But to Black America he was the first one for us that we saw in roles. I got to meet him several times in L.A., which for me was the thrill of a lifetime. I hope some of our young guys get to read about him."

76ers: Starting PG Tyrese Maxey, along with Paul Reed and Jaden Springer, sat out due to health and safety protocols. Isaiah Joe (back) and Shake Milton (back) also didn't play.

76ers: Rivers liked what Johnson gave the team in his recent 10-day stint with the 76ers; he averaged 3.7 points in three appearances. "Loved him, wish we would've kept him," he said. … Improved to 8-8 at home. … Thybulle returned from a two-game absence because of COVID-19 protocols and scored 12 points. … Charlie Brown Jr., signed to a 10-day contract on Monday, had three points in his first appearance. He played collegiately at nearby Saint Joseph's.

Spurs: At Brooklyn on Sunday.

76ers: At Houston on Monday.