LOS ANGELES — Red roses adorned the courtside seats where Kobe and Gianna Bryant sat at the last Los Angeles Lakers game they attended. On the overhead video board, photos of Bryant in action for the Lakers alternated with those of the other seven people who were killed alongside him and his 13-year-old daughter in a helicopter crash.

Friday night at Staples Center (Saturday, Manila time) was unlike any other.

The Lakers play the Portland Trail Blazers, their first since game Bryant's death.

But in the couple hours leading up to the game there was mostly silence. The electric atmosphere that surges through the arena before NBA games was nowhere to be felt. Media talked quietly among themselves without the usual music playing. Somber ushers took up their positions with black ribbons attached to their purple work shirts. Grief counseling was offered to arena staff and one female usher pulled tissues out of her pocket that had been provided.

Inside the Lakers locker room, Bryant's No. 24 gold jersey hung on a wooden hanger from a fire alarm next to LeBron James' locker. It was Bryant's locker when he helped the team win five NBA championships during his 20 years in Los Angeles.

"He's been really a tower of strength for all of us," Lakers coach Frank Vogel said of James. "We're following his lead." 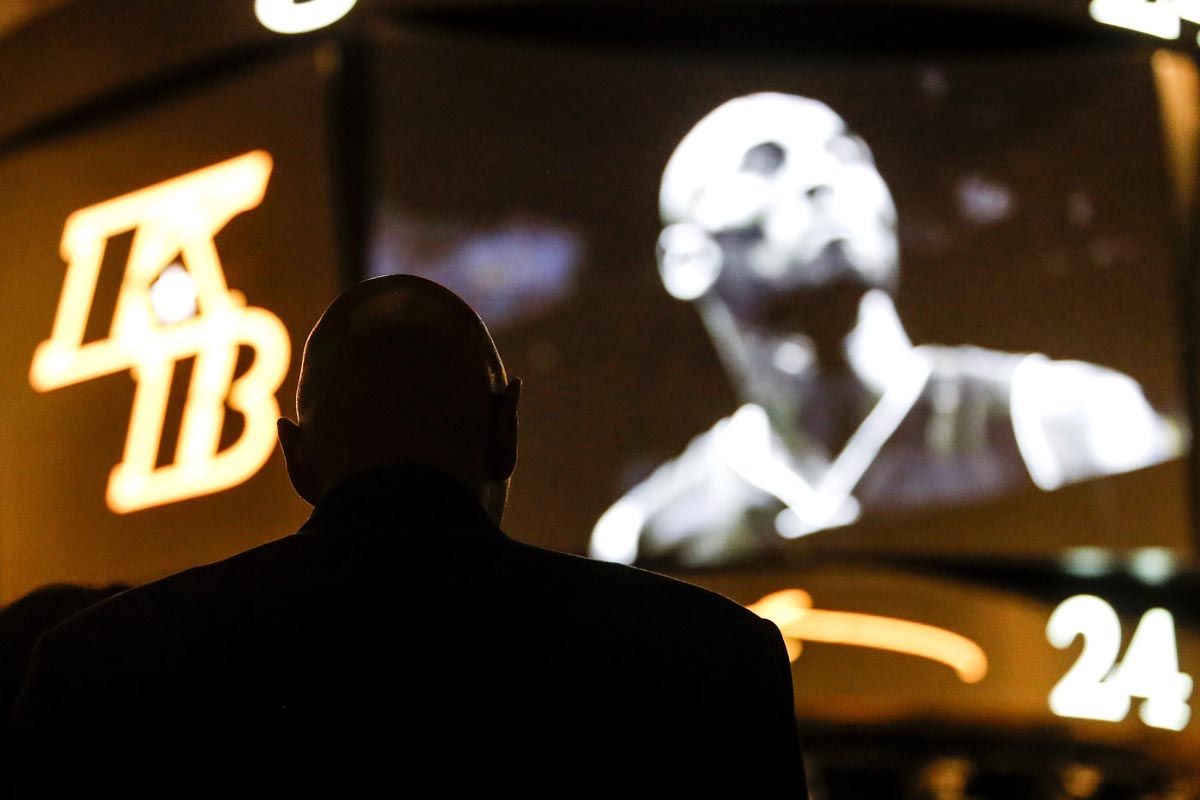 Dwight Howard sat at his locker with earbuds in. None of the players spoke before the game.

Back in the arena, Jeff Nadal was among the early arriving fans. Nadal rolled up a giveaway No. 24 T-shirt in his hand and rested his chin on it, staring into space.

The music began playing once the public flowed through the doors. Several fans donned the gold T-shirts at their seats; others took pictures of the video board and the electronic ribbon scrolling the victims' names around the upper level. The back of Bryant's seat had a black-and-white Mamba jersey on it, while Gianna's seat had a No. 24 jersey. 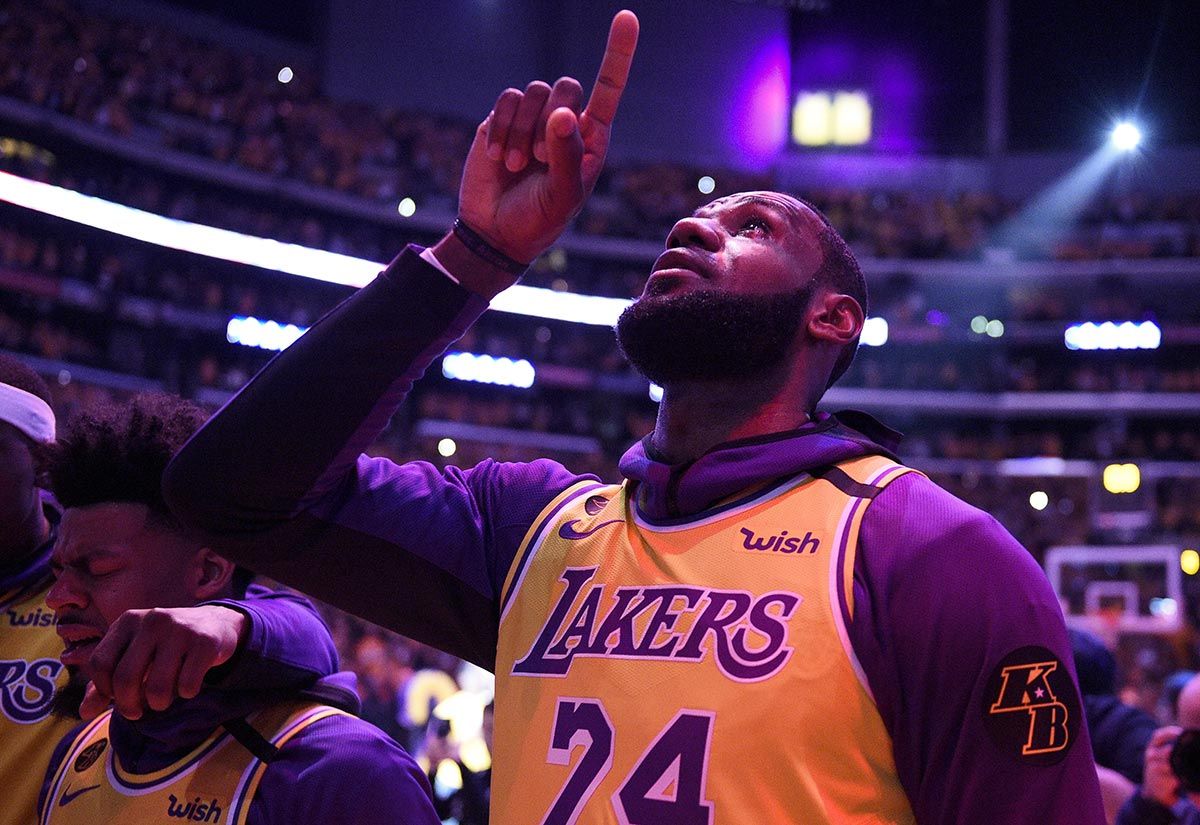 "We know it's going to be a heavy-hearted night," Vogel said. "It's our job to manage our emotions and honor Kobe, Gianna and the other victims the right way."

Across the street from Staples Center, large crowds continued to gather for informal public mourning at a plaza loaded with flowers, balloons and hand-written messages, many on the pavement, honoring Bryant and his daughter.

Large poster boards covered in signatures and messages were moved to the middle of the blocked off street separating the arena and the LA Live entertainment district. 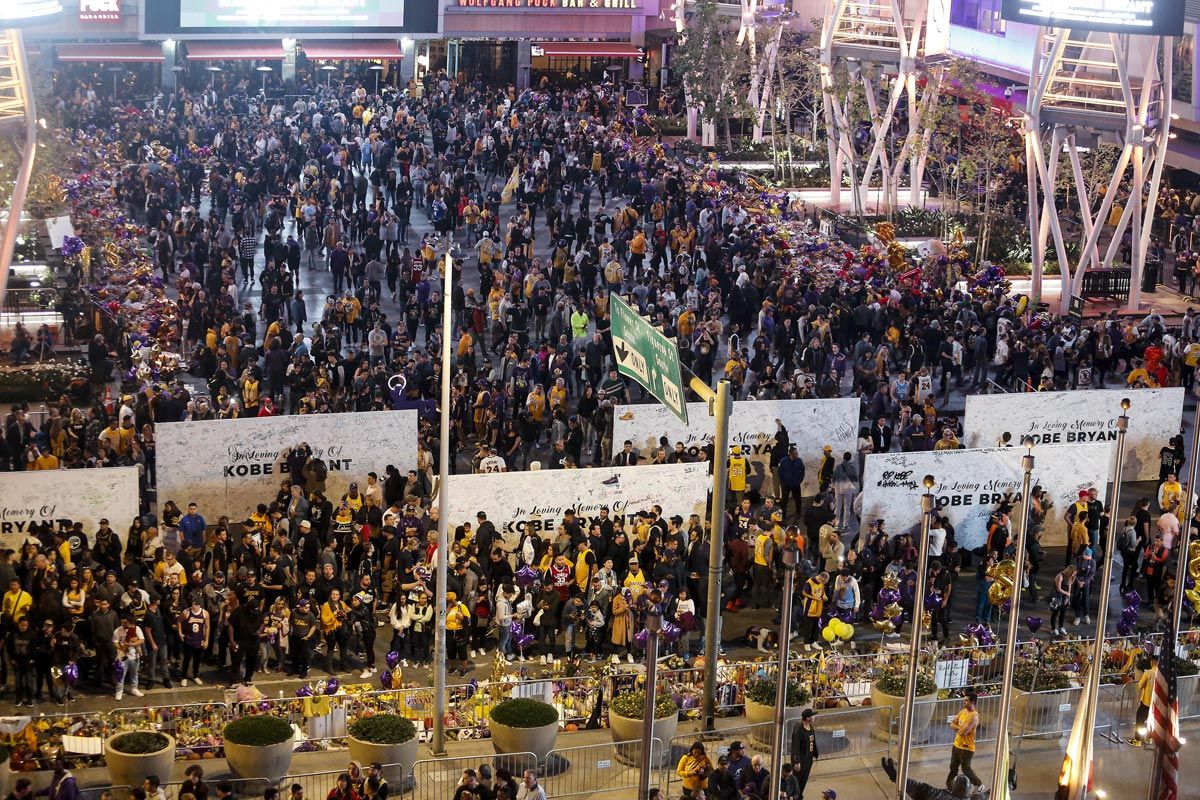 Daniel Torres of Long Beach did not have a ticket to the game, but decided to come downtown to view the makeshift memorials.

"I grew up with Kobe. I'm not a very emotional person but I've been crying all week," said Torres, who was wearing a Bryant jersey from Lower Merion High outside Philadelphia. "I can't believe the outpouring and how many people loved him."

The Lakers wore a "KB" patch on their jerseys while his retired No. 8 and No. 24 jerseys decorate the court. Fans on one side of the arena will wear shirts with No. 8 while the other side will wear No. 24.

The Lakers asked fans who didn't have tickets to not linger outside. They also advised that the pregame ceremony would not be shown on outdoor video screens.

Chris Clayton of Los Angeles was selling purple T-shirts with an illustration of Bryant and his daughter.

"Everyone remains devastated and stunned," he said. "Tonight's ceremony is going to be unbelievable."

The Clippers and Sacramento Kings played Thursday night in the first NBA game at Staples since Bryant's death. Clippers superstar and Los Angeles-area native Paul George narrated a 2-minute video tribute in which he said Bryant "was as synonymous with Southern California as the sunshine and touched every inch of it."