BOSTON — Jaylen Brown scored 26 points and Jayson Tatum had 24, carrying the Boston Celtics to a 101-98 overtime victory over the Indiana Pacers on Monday night (Tuesday, Manila time) in the first of a home-and-home series between the teams.

Robert Williams III had 14 points and 12 rebounds for Boston, including a key block in OT. The Celtics won for the fourth time in six games.

Torrey Craig led the Pacers with 19 points and Lance Stephenson scored 14 but missed a potential tying 3-pointer late in OT. Indiana has lost seven of eight.

Pacers scoring leader Domantas Sabonis was held to 11 points but had 23 rebounds after scoring a career-best 42 points in his last game. He finished with a triple-double, adding 10 assists.

Brown's one-handed shot from the lane gave Boston a 93-91 edge with 2 ½ minutes left in OT.

After Robert Williams blocked Oshae Brissett's shot, Grant Williams nailed a 3 from the right corner for his first basket of the night.

The Pacers cut it to 98-95 and Stephenson's 3 rimmed out with just under 10 seconds to play.

With Indiana trailing 101-98 after Tatum's two free throws with 2.5 seconds left, Robert Williams stole Indiana's long desperation pass from its own baseline and the horn sounded.

Brown recorded his first career triple-double in the Celtics' last game, a win over the Knicks on Saturday.

Tatum's fadaway jumper on the left baseline tied it at 89 with 1.8 seconds left in regulation.

Holiday's contested jumper from right in front of Boston's bench bounced off the rim as the buzzer sounded, sending it to OT. 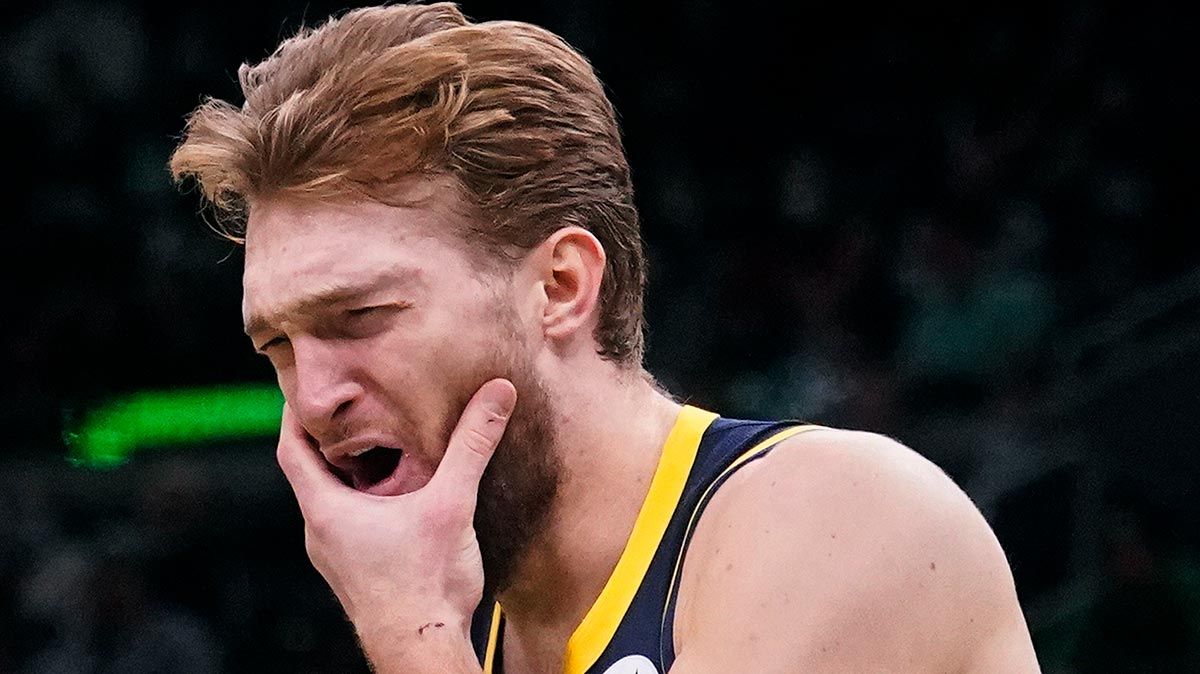 Indiana forward Domantas Sabonis is limited to 11 points after a 42-point game.

Pacers: Sabonis entered the final quarter with just four points after his big game in a victory over Utah and missed two easy looks off offensive rebounds on the same possession midway into the third quarter. He also went to the floor after getting hit in the face trying to go up for a shot with no call. ... They missed 18 of their initial 22 from 3-point range. ... They had only 60 points after three quarters.

Celtics: Robert Williams had a couple of crowd-pleasing put-back jams in what was a relatively uneventful first half. ... Guard Payton Pritchard remains in the league's health and safety protocol.

Tatum wore sneakers that were florescent orange, which easily stood out with most of his teammates wearing white or black.

Stephenson slowly dribbled the ball up the floor without any defensive pressure and was called for an eight-second violation in the third quarter.

PACERS IN AND OUT

The teams meet again in Indiana on Wednesday night.