The Suns trailed for most of the first half and by 10 points early in the third quarter but rallied to take the lead by late in the third. Devin Booker made a 27-foot, step back 3-pointer and Bridges added a driving layup for a 79-72 advantage.

They pushed the lead to 88-79 going into the fourth. Paul — who played with an ailing shooting shoulder through most of the first round matchup against the Lakers — made back-to-back mid-range jumpers to put the Suns up 94-79 with 10:25 left.

The flurry came much to the delight of the sellout crowd of 16,319, who anxiously watched the point guard's every move.

Paul's buckets were the final exclamation points on a 34-9 run that helped Phoenix take control. Deandre Ayton finished with 20 points and 10 rebounds while Booker added 21 points.

It was surprising that the game didn't come down to the final minutes. The three regular-season meetings were all extremely close: One was decided by three points in regulation, another was settled in overtime and the other went to double overtime.

Nikola Jokic led the Nuggets with 22 points but went cold while the Suns made their second half run. Aaron Gordon added 18 points while Michael Porter Jr. had 15.

The big man matchup between Jokic and Ayton delivered in the first quarter as the two teams fought to a 28-all tie. Ayton threw down a thunderous dunk over Michael Porter Jr. while Jokic used his strength and positioning to make five of six shots.

Denver led 58-57 at halftime. Jokic had 15 points and six rebounds before the break while Booker and Ayton countered with 11 points each for the Suns. 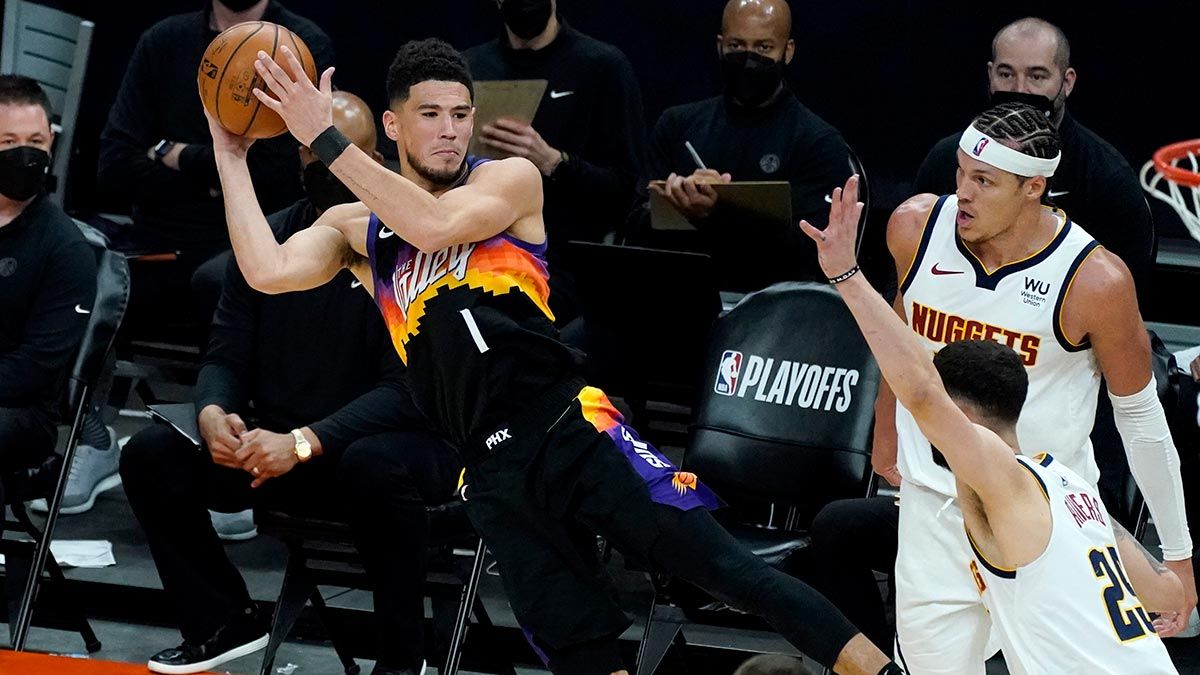 All eyes were on Paul in the opening minutes, especially after his ailing right shoulder was inadvertently bumped by Denver point guard Facundo Campazzo.

The 11-time All-Star looked uncomfortable for a moment but recovered quickly. He made a 3-pointer in the second quarter and then a turnaround jumper.

He really started to look like his old self in the fourth quarter, when he knocked down back-to-back jumpers to push the Suns up 15. Partly because of the shoulder injury, Paul averaged just 9.2 points per game against the Lakers in the first round.

Williams wasn't upset to finish second, especially since the winner was Thibodeau. The two worked together when they were assistant coaches with USA basketball.

"It's pretty cool to watch someone I've worked with win an award like that," Williams said.

Celebrity chef Guy Fieri was among the fans sitting courtside at Phoenix Suns Arena. The band Jimmy Eat World, which was formed in Mesa, Arizona, in the 1990s and had a string of hits in the 2000s, performed at halftime.