TORONTO — For the Toronto Raptors to return to championship contention, they'll need Scottie Barnes to progress from a Rookie of the Year winner to an All-NBA talent.

Among his Toronto teammates, there's no doubt Barnes has the ability to make that evolution happen.

"The sky is the limit," guard Gary Trent Jr. said. "I saw growth from day one of training camp to the end of the season. After a summer of work, after getting a season under his belt, I can't wait to see how he comes back next year. He's going to continue to put in the work, continue to chase greatness. He can be whatever he wants to be."

Barnes averaged 15.3 points, 7.5 rebounds, 3.5 assists and 35.4 minutes, starting all 74 games he played. He led all rookies in minutes and was third in points and rebounds.

"That's probably as good of a year as you can have as a guy in his position," All-Star guard Fred VanVleet said of Barnes. "He got a ton of minutes, a ton of experience at every position, offensively and defensively. He had some injuries he had to come back from. He pretty much did it all."

The No. 4 draft pick after one season at Florida State, Barnes joined Vince Carter (1999) and Damon Stoudamire (1995-96) as Toronto players to be voted Rookie of the Year. Barnes edged Cleveland's Evan Mobley by 15 points, the closest margin under the current voting format that began with the 2002-03 season.

"I'd say my first year as a pro was pretty solid," Barnes said on Friday as the Raptors held their exit interviews, one day after losing Game Six of their first round playoff series against the Philadelphia 76ers. "I learned a lot, developed. It's just about trying to win, build on this season, get better and come back stronger."

Asked whether he needed any time for a reflective pause after his first pro season, Barnes said he's already eager for 2022-23.

"Just keep putting the foot on their neck, keep going," he said. "I already took my deep breath. It's time to keep going."

In Toronto this season, Barnes joined a lineup loaded with similar-sized players, all long, athletic and versatile.

"It was really good to have all those versatile guys, guys that can do a lot of things on the floor," forward Pascal Siakam said. "It was fun."

What the Raptors didn't have, however, was a player taller than 6-foot-9, which made the already difficult task of defending 76ers center Joel Embiid even more of a challenge come playoff time. That challenge grew larger when Barnes sprained his left ankle in Game One and missed the next two, both losses.

"We saw it have a lot of success, but basketball is such a flexible sport that you've got to have different options," VanVleet said of Toronto's unique roster. "Different things call for different matchups in different series. Having options never hurts." 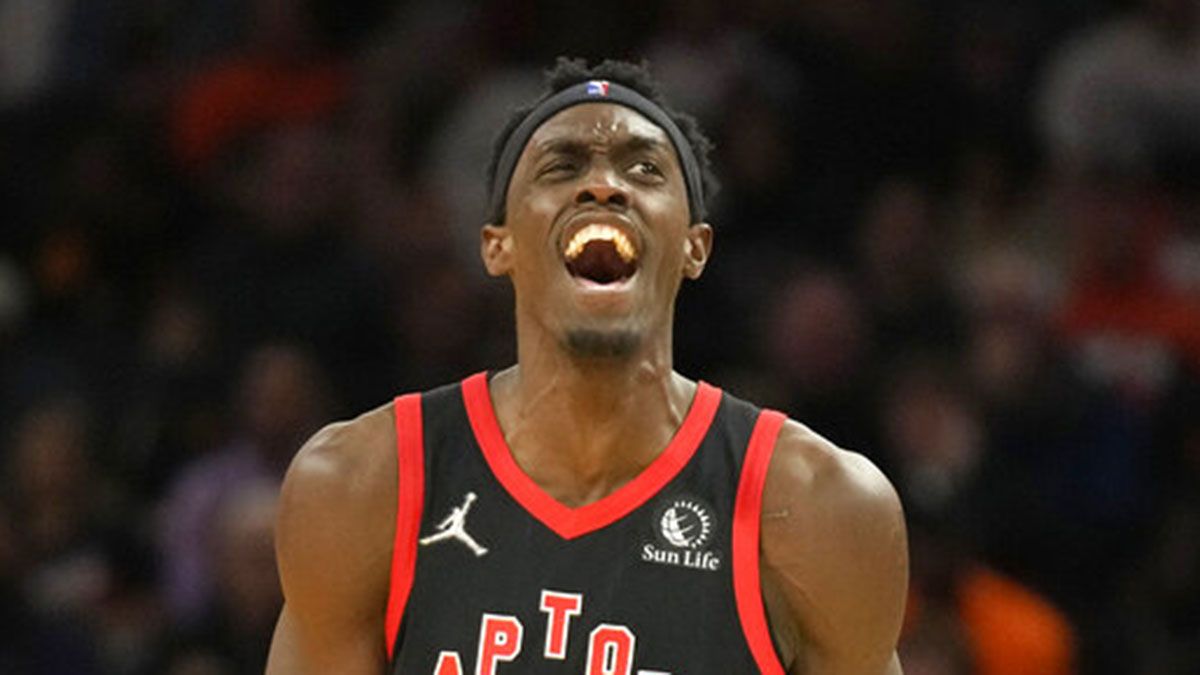 Pascal Siakam and the Raptors bow out at the first stage of the playoffs.

Despite missing all of training camp and the first two weeks of the season while recovering from left shoulder surgery, Siakam averaged 22.8 points, just shy of matching a career high, and set career bests with 8.5 rebounds and 5.3 assists per game.

Siakam said it "felt like the bottom" when his difficult 2020-21 season was cut short by injury, and he was "grateful" to be able to return strong after his first surgery and rehab experience.

"For me, that's the most important thing, just being grateful that after going through everything that I went though, I was standing up," he said.

Forward OG Anunoby set career highs with 17.1 points and 2.6 assists per game, and matched his career high with 5.5 rebounds. However, Anunoby was limited to 48 games because of injuries, his second straight abbreviated campaign. He missed 13 games in the first half because of a sore left hip, and 15 games after the All-Star break because of a fractured right ring finger.

Toronto's best defender, Anunoby hasn't played more than 70 games in a season since 2017-18, when he was a rookie.

"That's my goal," Anunoby said of playing 70 games. "I wish I could have this year. Hopefully next year I do that."

Forwards Thad Young and Chris Boucher and Toronto's notable free agents. Boucher, who grew up in Montreal, said he's open to staying north of the border next season.

"I love Toronto. Toronto did a lot for me," Boucher said. "From the young player I was when I came here to who I am now, I owe it all to Toronto."