QUIN Snyder guided the Utah Jazz to six consecutive playoff appearances, was an NBA coach of the year finalist just last season and won nearly 60 percent of his games with the franchise.

And he's decided that was enough.

Snyder resigned on Sunday (Monday, Manila time) as coach of the Jazz, ending an eight-year run of regular-season success but with the team never getting past the second round of the playoffs in his tenure.

Snyder released a statement through the team, part of it simply saying "it is time."

"At the core, and what drives me every day is our players and their passion for the game, their desire to constantly work to improve and their dedication to the team and the Jazz," Snyder said. "I strongly feel they need a new voice to continue to evolve. That's it. No philosophical differences, no other reason. After eight years, I just feel it is time to move onward. I needed to take time to detach after the season and make sure this was the right decision."

He went 372-264 with the Jazz, his winning percentage of .585 ranking as 18th-best among NBA coaches who have worked for at least that long. He's one of only two coaches to have a winning record with the Jazz, Jerry Sloan being the other.

"Quin Snyder has embodied what Jazz basketball is for the last eight years," Jazz owner Ryan Smith said. "The tireless work ethic and attention to detail Quin displayed each day is a testament to the professional he is. I have nothing but admiration for Quin and respect his decision." 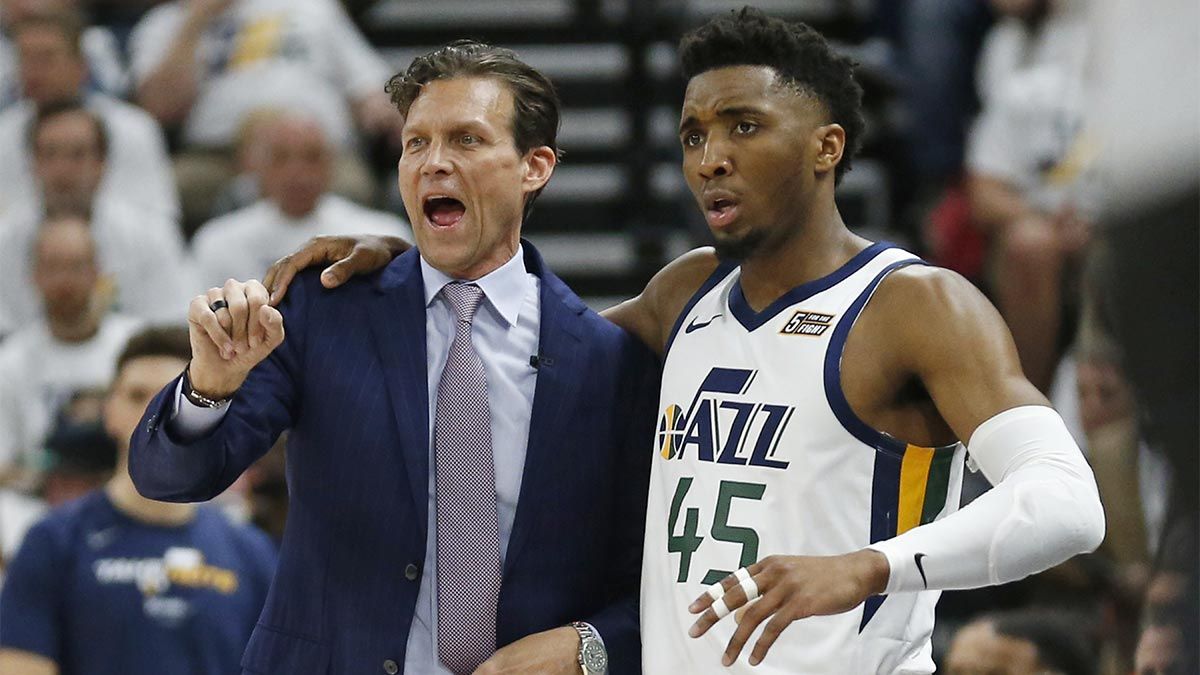 "He's a guy that gave me an opportunity when I first got here and trusted in me, believed in me," Dnovan Mitchell says of Quin Snyder.

Snyder was a four-time coach of the month, the most recent of those awards coming this past February. The Jazz had the best record in the NBA in the 2020-21 season, but couldn't get past the Western Conference semifinals — part of a run where the team has dropped five of its last six playoff series.

And this season simply collapsed: Utah looked the part of a title contender for some of the season, getting off to a 7-1 start and standing at 26-9 when the calendar flipped to 2022. It all changed somewhere along the way; the Jazz had three separate losing streaks of at least four games, and in games played after Jan. 1 wound up going only 25-28.

The first-round ouster continued a troubling trend in Utah of regular-season success never translating to the playoffs. The Jazz were 21-30 in postseason games under Snyder, losing in the first round three times and losing in the second round in their other three playoff appearances during his tenure.

Utah becomes the second team in the league with a current coaching opening, Charlotte being the other. And that makes Snyder's immediate future unclear.

He was mentioned as a possible candidates for some jobs that were open — the Los Angeles Lakers, for example, a position that wound up going to longtime assistant Darvin Ham. Snyder has even been considered a potential future candidate for a job that hasn't been open for more than a quarter-century, that being in the one in San Antonio held by NBA wins leader Gregg Popovich.

"I loved my time with Quin," Jazz center Rudy Gobert when this season ended. "There's always going to be talk about a lot of things, especially when you have disappointing endings like we had this season."

"Love Quin. I love Quin. Love Quin," Mitchell said after Utah's first-round ouster. "He's a guy that gave me an opportunity when I first got here and trusted in me, believed in me. He's a guy that I think has had so much talked about and he's been headstrong, he's been steady with it throughout the year."

The coaching change could be the first step in an offseason of major change for the Jazz.

Gobert is owed $85 million over the next two years, plus holds a $46.6 million player option for the 2025-26 season. Mitchell is owed $67.5 million for the next two seasons, followed by a $37 million player option. Their relationship has been strained at times, going back to at least the start of the pandemic, when Gobert was the first NBA player to test positive for COVID-19 and Mitchell tested positive a day later. And speculation has been rampant since about whether a dynamic scorer like Mitchell and a dominant defender like Gobert can be the sort of 1-2 punch that leads a championship team.

Both will figure to have interest if the Jazz choose to make them available on the trade market — and it's not outside the realm of possibility that either or both players might ask for a move as well.

"There's things that could change," Mitchell acknowledged when the season ended. "I'm not ready to discuss that, to be honest with you right now. Mentally, I'm just not in that headspace to be completely honest with you. I'm really not. For me, this sucks."

The first change has come. Snyder has left.

"Thank you to our always supportive and passionate fans," Snyder said. "We only want the best for you and to see you raise a championship banner."